After being liberated from the Islamic State, the Diyala province is suffering from increased ethnic, sectarian and political conflicts that could turn into armed clashes at any moment. 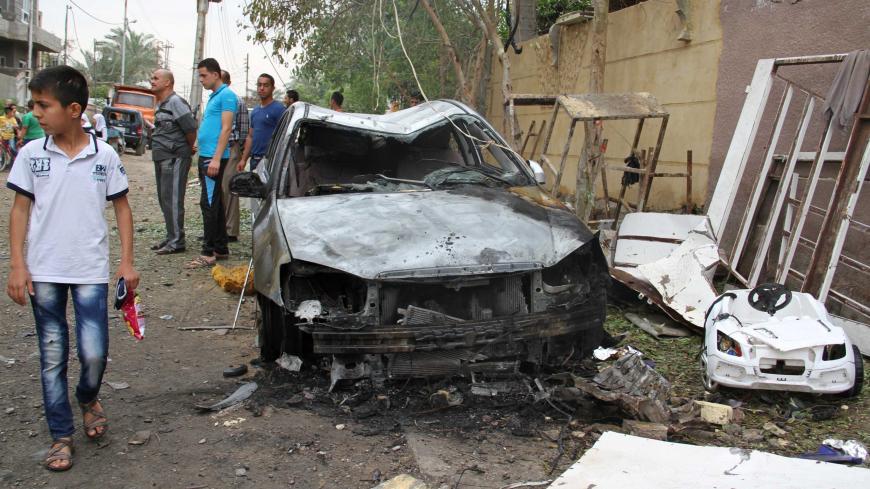 An Iraqi boy walks past the site of a car bomb explosion that killed at least 10 people in the city of Baqouba, Diyala province, May 10, 2016. - YOUNIS AL-BAYATI/AFP/Getty Images

BAGHDAD — The Iraqi parliament’s Security and Defense Committee raised alarm bells Sept. 7 about the political crisis rocking Diyala province northeast of Baghdad, which stretches to the Iranian border. It warned that the Islamic State (IS) could stage a comeback in some liberated areas due to the ethnic, sectarian and political conflict in the province. Diyala province has a population of some 1.27 million people, including a majority of Arabs who are more or less equally divided between Sunni and Shiite, followed by Kurds and Turkmens.

As if to underline the prospect of an ethnic conflict, 100 fighters from the Popular Mobilization Units (PMU) on Sept. 10 took over the municipality headquarters of Mandali and forcibly lowered the Kurdish flag.

The mix of sects and national groups in Diyala “has placed it in the vortex of ongoing conflict since 2003,” Mohammed al-Khalidi, a member and former speaker of the Iraqi parliament, told Al-Monitor. “The province’s geographical position on the Iranian border adds to its political polarization and makes it likely the Shiite forces there will be attacked.”

Khalidi continued, “The fact that the province adjoins the Kurdish region adds to the Kurdish influence and there are efforts to further strengthen this, while the Sunni Arabs believe they have the right to run the province as they see themselves as the majority both historically and today.”

The clout of Sunni opinion was seen in the results of the 2005 election, which saw Sunni parties win a majority on the provincial council.

But “you have to go back to the recent history of the province to understand the nature of the conflict,” Khalidi said. “The province was liberated from Daesh [IS] in 2015, and the Shiite PMU forces played a major role in that, which entrenched their presence in the province and strengthened their political role. What happened after the province was liberated was not what was needed. Instead of stability and security, there were kidnappings and tit-for-tat killings that are still ongoing.”

The most notable act of sectarian vengeance was an IS attack in early 2016 on a cafe in northeastern Baqouba, the provincial capital that is frequented by Shiites. The attack left dozens dead, prompting the Shiite armed factions to respond by burning and bombing several mosques and invading Sunni-majority residential areas of Al-Muqdadiyah.

Using the military clout they gained after taking part in the battle, the Shiite forces have taken more power in the city following the defeat of IS. That was very clear when armed men took over the provincial headquarters on Aug. 27 to prevent the firing of Gov. Muthanna al-Tamimi, of the Shiite Badr Organization, which is led by senior PMU commander Hadi al-Amiri, himself from Diyala.

Sunnis, who consider Diyala a Sunni province, saw that as an attempt to overturn the political and sectarian balance, which demands that a Sunni from the province hold the position of governor. Writer Haroun Mohammad, a Sunni from Diyala, said on Sept. 7, “The leader of the Badr Organization, Hadi al-Amiri, is effectively the general ruler of Diyala.”

That corresponds with reports on Aug. 12 that PMU units had caused massive destruction in Al-Muqdadiyah, including setting fire to orchards, as part of a plan to engineer demographic change in the area in favor of the Shiites.

Member of parliament Furat al-Tamimi, a Shiite from the Al-Watan bloc, told Al-Monitor that the accusations were unfounded and "aim to stir unrest and create violent chaos in the interests of political groups that don’t benefit from stability in Diyala.”

He continued, “There are battles that flare up from time to time due to pockets of Daesh [IS] fighters, and they are dealt with by security forces. But some political figures and media groups maliciously portray them as attacks on Sunni residents.”

“Another fallacy presented by these groups relates to the provincial administration,” he said. “The provincial council is the body that elected Muthanna al-Tamimi as governor. The Badr Organization’s intervention in his favor was to prevent other groups from overthrowing him by force, in violation of the system and the law. … All sides are taking part in the administration of the province today.”

Areas of the province such as Khanaqin and Mandali are on the edge of the precipice of an ethnic conflict that could break out into armed clashes at any time between Kurds, who see the areas as Kurdish, and Arabs, who refuse to see them incorporated into the referendum on independence of Iraqi Kurdistan set for Sept. 25, as they see those areas as “Arab.”

The government’s stance on the conflict is reflected in a statement by Saad al-Hadithi, the spokesman for the office of Prime Minister Haider al-Abadi. He told Al-Monitor, “Political rivalry in Diyala is acceptable as long as it stays within the law. The government supports the rule of law, and those who cause chaos and harm the residents will be dealt with as outlaws, whatever group they belong to.”

While views differ over the situation in Diyala, the presence of different national and sectarian groups in the province cannot be denied. An international organization left the province Sept. 7, prompting rival parties to meet for talks to try to avoid the province sliding into armed clashes and political conflict after the defeat of IS, something that would hobble efforts to reconstruct and create investment opportunities.