The Diyala attacks in January may have been intended to stir up a Sunni-Shiite war to drive Sunnis into the Islamic State’s arms. 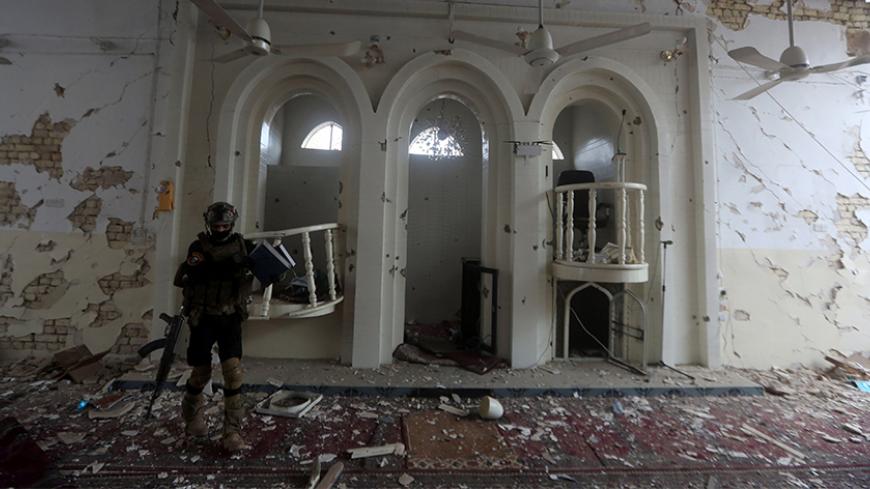 An Iraqi policeman checks the damage at a Sunni mosque that was destroyed during violence earlier in the month in the city of Muqdadiyah in Iraq's Diyala province, Jan. 23, 2016. Iraqi officers said Shiites set fire to several Sunni homes and the mosque following bombings at a cafe in Muqdadiyah. - AHMAD AL-RUBAYE/AFP/Getty Images

The Islamic State is reviving an old ploy designed to recruit Sunnis by fomenting sectarian hatred. The January suicide bombings in Diyala province, which exemplify the strategy, heightened the fever between Shiites and Sunnis, especially as each side accuses the other of perpetrating the attacks.

Some Sunni parties accuse the Shiite Popular Mobilization Units of attacking and burning down mosques, while Shiites point the finger at Sunnis, accusing them of supporting and protecting IS fighters.

But IS — which has portrayed itself as a protector of Sunni Arabs in Iraq and warned of a catastrophic fate for the Sunnis under what it considers Shiite rule — is the biggest beneficiary of these events. It appears IS specifically is encouraging flare-ups in areas recently freed from its grip such as Abu Sayda, Baquba and Muqdadiyah.

A suicide bombing occurred Jan. 11 in a popular cafe in Muqdadiyah's al-Asri neighborhood. As security forces and rescue workers arrived, a car bomb targeting the first responders exploded; the death toll reached 23 and 44 people were wounded.

Another blast came the next day, targeting a security convoy near Baquba, 40 miles from Baghdad. That blast killed four security officers and wounded 11 people, including the provincial police intelligence director, Col. Qassem al-Anbaki.

Reprisal acts on both sides have affected Sunni and Shiite areas equally. Following the terrorist explosions came extensive attacks on shops and more than a dozen mosques in Muqdadiyah, Balad Ruz and their suburbs.

Iraqi officials and Popular Mobilization Units leaders were quick to control the situation and prevent its spread. Prime Minister Haider al-Abadi visited Diyala province Jan. 14 and Jan. 19. During his first visit, he issued strict directives on the need to punish and arrest those who attacked the mosques, protect public property in the province and firmly deal with those “causing sectarian sedition.”

Hadi al-Amiri, a Popular Mobilization Units administrator and head of the Shiite Badr Organization — a political party and militia with wide influence in Diyala province — issued a statement Jan. 12 strongly condemning “the attacks on the mosques in Diyala and the targeting of media figures,” referring to the assassinations that day of an al-Sharqiya Channel reporter and cameraman by unknown assailants.

Amiri also visited Muqdadiyah on Jan. 19 and stressed that “the Popular Mobilization Units at the service of the citizens of Muqdadiyah are keen to preserve its stability and security.”

The Sunni Supreme Coordinating Committee, led by Osama al-Nujaifi, demanded that the United Nations be contacted about the Diyala events and asked for “international protection for the Sunni Arabs” in Iraq.

In the same vein, on Jan. 13, the Association of Muslim Scholars called for Muslim governments to “intervene to protect Sunnis by addressing global human rights organizations regarding the Iraqi government’s crimes and by holding it fully responsible for the massacres and tragedies in Sunni cities.” No action on the matter has been taken yet.

Diyala has experienced sectarian tensions for years, as the province includes Sunnis, Shiites and Kurds. Diyala is located between Baghdad and Iran, which shares a long border with Iraq. This makes Diyala the perfect location for any Shiite or Sunni parties seeking to encourage sectarian and ethnic sedition between Sunnis and Shiites, or between Arabs and Kurds.

The province experienced several waves of forced displacement in 2006 and 2007 after the bombing of the Askari shrine in Samarra in February 2006. Shiites were accused of displacing Sunnis in revenge for the mosque’s destruction.

Al-Monitor talked with security officials who spoke on condition of anonymity. They said that Diyala province has IS sleeper cells and that the terrorist bombings on Jan. 11-12 were intended to provoke a reaction by the Shiite factions in the province against Sunnis — which is exactly what happened. Uncontrolled groups of the Popular Mobilization Units reacted violently and randomly against the Sunnis in some areas of the province, according to security officials.

However, no party claimed responsibility for the attacks.

This is an old strategy that IS founder Abu Musab al-Zarqawi also employed (the organization was then known as al-Qaeda in Iraq). When al-Qaeda leader Ayman al-Zawahri asked Zarqawi in 2005 not to target Shiites and to instead focus on US targets in Iraq, Zarqawi is reported to have responded, “If we succeed in dragging them [Shiites] to a sectarian war, it would be possible to awaken the Sunnis, who would otherwise remain dormant if they don’t feel an imminent threat of extermination at the hands of the Shiites.” (Zarqawi was killed by US forces in 2006.)

What happened in Diyala, and previously in other areas of Iraq during the height of the sectarian war (2006-2008), is likely to happen again. That would completely be in line with IS' use of Zarqawi’s strategy. IS wants to create a sectarian atmosphere to drive the Sunnis into IS’ arms, especially since the terrorist group has been acting to intimidate some Sunnis to fight in its ranks.

The Iraqi government should be aware of this aim and try to prevent it. If Sunnis feel that the central government is not protecting them, that would undoubtedly play into the hands of IS and other terrorist organizations.

Accordingly, decisively punishing those who attacked Sunni centers and taking strong action to prevent a recurrence would be important steps in this regard, especially in the areas that were recently liberated from IS’ grip.