Iraq is seeking to preserve what’s left of its antiquities through the establishment of a special security force to protect one of its richest provinces in terms of archaeological sites. 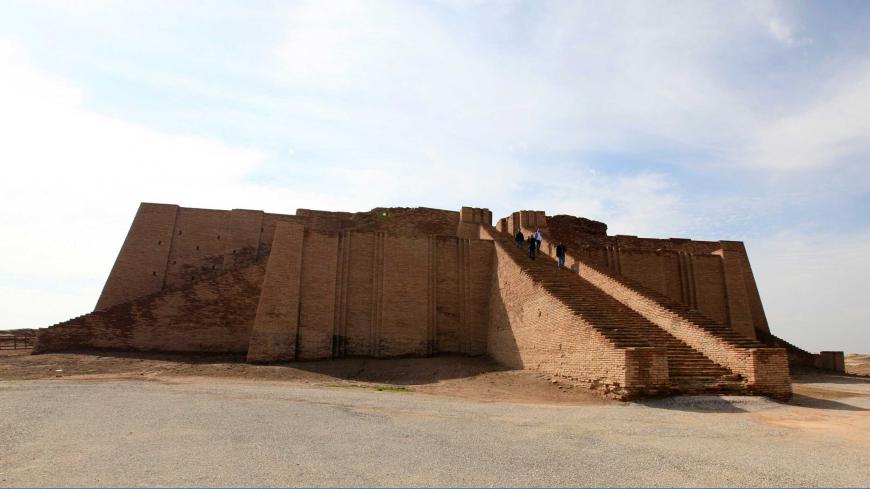 People stand on the steps of the Ziggurat of Ur near Nasiriyah, Iraq, Jan. 23, 2014. - REUTERS/Ahmed Saad

However, local officials have argued that this force is incapable of protecting archaeological areas. They say it lacks adequate equipment, plans and training to thwart attacks on archaeological sites located in open areas with no perimeter fencing.

Prophet Abraham’s house, the Ziggurat of Ur, the royal cemetery and Dublal-makh temple, considered the oldest court in history, are located in Dhi Qar province.

According to Ajyal al-Moussawi, the chairman of the Committee of Tourism and Antiquities in Dhi Qar, “The province hosts 1,200 archaeological sites in danger due to neglect and trespassing.”

Moussawi seemed skeptical about the role of the new security force, arguing that this is due to “the poor equipment and lack of plans to provide security for archaeological sites.”

Iraq is not only seeking to protect its antiquities from theft. The country is stepping up efforts to have new archaeological sites inscribed on UNESCO’s World Heritage List after the Iraqi marshlands in Dhi Qar joined the list.

Hamid al-Ghazi, the head of the provincial council of Dhi Qar, said, “There’s a plan to protect antiquities, including the signing of agreements between Dhi Qar and other bordering provinces to curb … antiquities trafficking activities.”

Although the governor spoke of a plan and joint agreements with other provinces, those provinces have not yet taken any measures, while others are unaware of the agreements mentioned by Ghazi.

The chairman of the security committee within Dhi Qar’s provincial council, Jabbar al-Moussawi, told Al-Monitor, “The new security force established to protect the province’s archaeological sites won’t be able to do its job. The area and number of sites are considerably large for the force to handle.”

Upon visiting Dhi Qar’s most notable sites, the Ziggurat of Ur and prophet Abraham’s house, one would come across a single checkpoint manned with one or two policemen only checking the documents of the cars entering the archaeological city. Inside, there’s only one guard in his 50s armed with a Kalashnikov rifle.

Dayef Muhsen is following in the steps of his father and grandfather, who have protected the Ziggurat of Ur since its discovery in 1921. Muhsen told Al-Monitor, “Sometimes, some individuals attempt to sneak into the ziggurat at night to steal bricks or look for other things, but I’m able to chase them off by myself.”

In this regard, Iraqi archaeologist Amer Abdul-Razzaq al-Zubaidi told Al-Monitor, “A security force was formed back in 2004 to protect Dhi Qar’s archaeological sites by the international coalition forces. It was supported by Iraqi citizens and experts. However, there’s still a shortage in providing full and adequate security for Iraqi antiquities.”

“Antiquities theft declined since the security force was formed in 2004, but it did not stop. Also there’s a community effort that plays a major role as far as collaborating with security agencies to safeguard antiquities,” he added.

An international plan is expected to be announced by UNESCO for the protection of Iraqi antiquities. It’s called the Response Plan for the Safeguarding of Cultural Heritage in Liberated Areas of Iraq.

Scattered across Iraq, archaeological sites require protection by a special force that has advanced training, satellites, expertise in detecting smuggled antiquities and a camera security system to monitor the vicinity of the sites.

However, the protection of Iraqi archaeological sites does not seem to be a priority for the Iraqi government. The establishment and equipment of a security force was a local decision made by Dhi Qar’s provincial council. A unified federal decision is yet to be made to include all of the provinces that host important archaeological sites.

The work of Dhi Qar’s new security force is limited to field patrols. It has failed to thwart past violations against monuments, raising concern among the members of the Dhi Qar provincial council.

In a city where arms proliferation is common outside official government forces, monuments won’t be safe from smuggling. The single guard of the Ziggurat of Ur and prophet Abraham’s house will not always be able to thwart smuggling attempts.

The formation of an understaffed security force with poor training and equipment is merely a formality aimed at providing protection for invaluable sites, and one day, this force might serve as an excuse for potential smuggling operations.