Sectarianism in Iraq peaks ahead of Kurdistan referendum

With the Kurdistan independence referendum just days away, politicians and the general public are fanning sectarian tension on both sides of the vote. 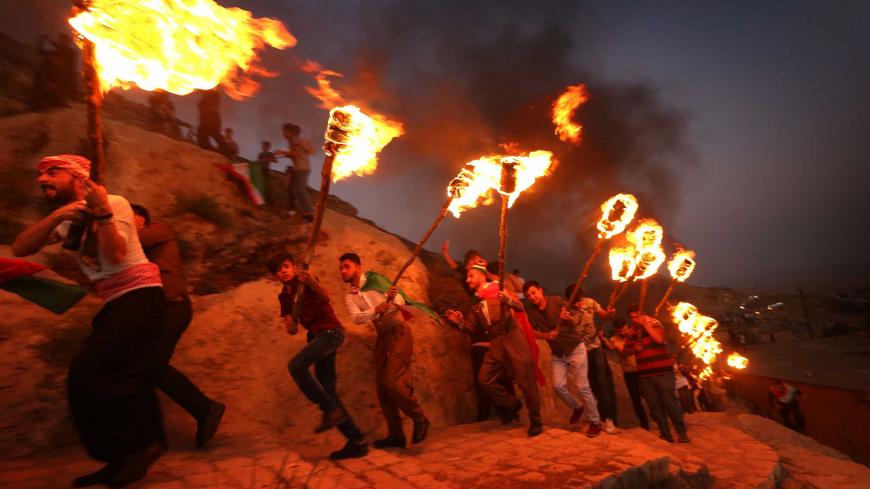 Iraqi Kurds wave Kurdish flags and hold torches as they walk up a mountain during a gathering to show support for the upcoming independence referendum, Akre, Iraqi Kurdistan, Sept. 10, 2017. - SAFIN HAMED/AFP/Getty Images

As Kurds grow more assertive about their right to hold a referendum on independence next week, rhetoric from politicians, military generals and regional officials is threatening to undermine the social cohesion that has so far prevailed in the Kurdistan Region of Iraq.

For over three years, the Islamic State (IS) did everything in its power to sow the seeds of division between the various religious and ethnic communities in Iraq. The militants failed to a large extent, but as the country struggles to recover from the devastation of war, the Kurdistan referendum has become yet another opportunity for some to induce fear in the heart of their communities and bolster their own positions. Social networking sites and in particular Facebook have become the most important media through which these sectarian messages are being circulated to the public in Iraqi Kurdistan and the rest of Iraq.

Thousands of displaced Arabs have lived in peace across the Kurdish region for years, and many are happy to continue living in the relative security of the north. “I have no complaints, and people are very receptive here in Sulaimaniyah,” said Khales, a 33-year-old nurse from Tal Afar who is now working in a hospital in Sulaimaniyah treating mainly Kurdish patients. Khales, who has learned some Kurdish, fled with his family immediately after IS took over Mosul and Tal Afar in June 2014. “I think people can live together if politicians let them,“ Khales said as he took a drag from his shisha surrounded by both Shiite and Sunni relatives under the willow trees at Chami Razan, a nature attraction near Sulaimaniyah.

Despite the current calm in the Kurdish region, the Kurds endured decades of oppression at the hand of successive regimes in Baghdad, and sectarian messages could have a negative impact on the Kurdish public and how they see their displaced Arab neighbors.

"As the time nears for the Sept. 25 referendum, both in the Kurdistan Region and other Iraqi provinces, the ugly signs of racism are increasingly on display in the media … and this is a dangerous development that requires action by civil society groups and freedom-seeking people,” Rezan Sheikh Dler, a Kurdish female parliamentarian, posted on Facebook in reference to a group of Kurdish youths burning the Iraqi flag earlier this month. “Kurds have a just political cause … and they do not need to provoke others to prove their cause,” Dler warned.

Despite the enduring sense of community in the Kurdish region, negative statements likening the Kurds to Zionists are circulating widely in the Shiite press both in Iraq and Iran. “Iraqis will endure through its unity and on the grave of the Zionists and their dogs in northern Iraq, especially the Barzani family,” Gen. Rashid Feleh, the commander of the Popular Mobilization Units in Anbar province, during the operation in Akashat, told the press Sept. 16. “We protect the constitution, and we protect it from anyone who wants to trample on the constitution and divide the land.”

Former Prime Minister Nouri al-Maliki also attacked the Kurds, stating that they want to create a “second Israel.” This message was echoed by the head of Iran's Assembly of Experts, which is responsible for choosing the supreme leader of Iran.

Wael Abdul Latif, a well-known former judge and current politician, called on Kurdish officials in Baghdad and other provinces to hand in their resignation letters and head back to the north over their insistence on holding the referendum.

Anti-Iraqi sentiment is also growing in the Kurdish areas. “Have you ever asked about the future of Kurdistan if we say no to independence and separating from a failing Iraq, which is sectarian, full of [IS] and Shiite militias?” warned Kurdish journalist Hividar Ahmed in a live broadcast over Facebook in early August. “Have you ever wondered about what it means to say no to the Kurdistan state and separating from failing Iraq, which desires to kill Kurds? The utmost desire of the Iraqis is to kill Kurds …”

For now, despite the sectarian language, the voice of reason is holding. "The future state of Kurdistan, God willing, will be a civic state and belong to everyone: Kurds, Arabs, Turkmens, Assyrians, Chaldeans, Syriacs and Armenians,” said the president of the Kurdistan Regional Government, Massoud Barzani, Sept. 16 in Dahuk, where thousands of people gathered to hear him speak about the referendum.

But as anxiety rises with the approaching referendum, it could take just a small incident for sectarian tension to get out of control.