In addition to international bodies, regional powers and Baghdad, the Shiite Kurdish group known as Feylis is also fundamentally opposed to Kurdistan’s secession from Iraq. 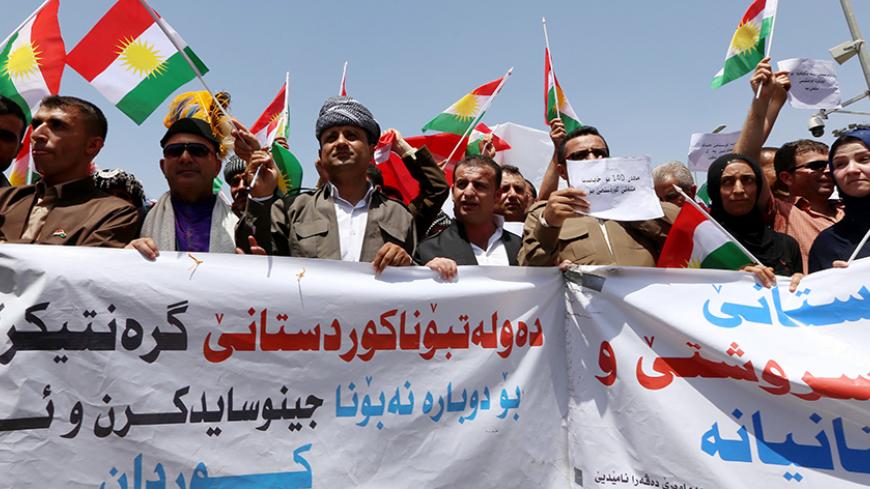 International bodies, regional powers and Baghdad are not alone in objecting to Iraqi Kurdistan's independence project. Feylis, who are Shiite Kurds, are also fundamentally opposed to Kurdistan’s possible secession from Iraq.

Immediately after the Kurdistan Regional Government (KRG) on June 7 announced its intention to hold a referendum on independence, most of the parties and forces concerned about Iraqi developments expressed their opposition, in part out of concern that it will lead to an escalation of regional crises. Iraqi Prime Minister Haider al-Abadi laid out the Iraqi government's official position June 18, stating, “The Kurdistan Regional referendum on secession is illegal, and the federal government will not support it, fund it or participate in it." The United States and Iraq's neighbors, including Turkey, Iran and Syria, oppose the country's territorial division.

The KRG, led by Massoud Barzani, head of the Kurdistan Democratic Party, announced its intention to hold a referendum, including in “Kurdish areas outside the administration of the Kurdistan region.” Iraqi Kurds outside KRG-controlled territory are mostly Feylis, who live along the border between Iran and Iraq, from south of Sulaimaniyah to north of Basra in Diyala, Wasit and Maysan provinces. There are also large numbers of Feylis in Baghdad and in the southern provinces, in particular the holy Shiite areas of Najaf and Karbala.

On June 27, Haidar Hisham, head of the Committee of Feyli Kurds in the Wasit Provincial Council, in eastern Iraq, announced the Feylis' opposition to the referendum and possible secession. He said, “The call for a referendum in the Kurdistan region of Iraq does not include the Feyli component because the referendum is geographic. In short, any referendum will be confined to Iraqi Kurdistan, despite the KRG's assertions otherwise.

Nasruddin Sindi, head of the KRG's Kurdistan Areas Authority, which deals with Kurdish areas outside the Kurdistan region, said July 8 that there is a lack of general agreement on the referendum even at the Kurdish political center and that this will affect the rate of voter participation both within and outside Kurdistan. He also warned that the failure to address internal Kurdish disputes will negatively affect voter turnout.

Feylis have suffered from widespread marginalization and persecution as a result of Iraq's national, sectarian and political divisions over the last several decades. Fouad Ali Akbar, a Feyli member of the Baghdad provincial council, told Al-Monitor, “They are Shiite Kurds, and this is what led the Saddam regime to persecute them. Neither Shiites nor Kurds have done Feylis justice. Most Feylis are moderate and culturally diverse, and this has prevented them from earning the trust of Kurds and Shiites, who, for ethnic and sectarian reasons, have not wanted them to have a stable identity with normal rights like other Iraqi citizens.”

That some Feylis live in Iran has led to those in Iraq being branded non-Iraqis. The labeling resulted in deportation to Iran for 300,000 to 500,000 Feylis under the Baathist regime during the 1970s and 1980s. More than 10,000 homes and other properties belonging to Feylis were confiscated. After the 2003 US-led overthrow of the Baathists, they became the target of Sunni terrorist groups because of their Shiite identity.

There are no official statistics on the number of Feylis given the displacement and exclusion that they experienced, but the Supreme National Front for the Feyli Kurds estimates that they constitute 2.5 million (6.5%) of Iraq's population, making them a fairly large segment of the Kurdish community. The CIA's World Factbook estimates that Kurds make up 15% to 20% of Iraq's population of some 38 million.

A large proportion of the Feyli community, including prominent figures such as the world-renowned oud player Naseer Shamma, falls in the middle class. Feylis have contributed to the establishment of Kurdish nationalist and resistance movements, including the Patriotic Union of Kurdistan, throughout the history of modern Iraq, but generally the main Kurdish political parties have been reluctant to acknowledge Feylis' Kurdish identity and welcome them to their organizations.

Feyli activist Hassan Abdali said, “We, the Feyli Kurds, consider ourselves original Iraqis. We have deep historical and social roots in Iraq. We defended the country and its people in all the Iraqi liberation movements, in the Iraqi revolt against the British, and we took part in Kurdish movements and Shiite revolutions and also in the fight against the Islamic State (IS). And we faced persecution from Arab and Kurdish nationalist movements.”

Following the announcement that a referendum would be held, voices demanding the expulsion to Kurdistan of Kurdish citizens from areas under Baghdad's control increased, which has naturally raised concern among Feylis.

Saad al-Matlabi, a member of the State of Law coalition on the Baghdad Provincial Council, threatened in late June to revoke the Iraqi citizenship of Kurds living outside Iraqi Kurdistan in the event of Kurdistan’s independence. His statement provoked demonstrations in Baghdad and Kirkuk, which the KRG wants to annex.

Ali Akbar told Al-Monitor, “The majority of Feylis are voicing concerns about the potential displacement, killing, confiscation of funds and systematic looting that they might face in the event of the declaration of independence of Kurdistan as a result of the threats they receive whenever a dispute between the central government and the KRG erupts.”

Such concerns have led the Kurdish parties opposed to the Sept. 25 referendum — Gorran (the Movement for Change), the Kurdistan Islamic Group and other small parties — to unite with the Feylis. On July 6, Gorran formed an operations room in solidarity with them.

Sarwa Abdel Wahid, head of Gorran's KRG parliamentary bloc, said in a joint press conference with Feyli representatives, including legislators, “The referendum to be held in September in Kurdistan is a partisan referendum that does not represent the ambition of all the Kurdish people, as it has failed to go through the legitimate national institutions.”

Asked about Feyli demands, Ali Akbar said, “The Feylis’ enduring demand, before and after IS, is for their usurped rights to be restored and to be treated the same as all other Iraqi citizens. They want parliamentary and governmental representation commensurate with their size.”

Individual Feylis belong to the large Kurdish and Shiite parties, but the group lacks representation as a bloc or independent party in the parliament in Baghdad, preventing its voice from being heard. Feylis also want international recognition similar to other Iraqi minorities.

Shiite National Alliance leader Ammar al-Hakim met with a delegation of Feylis on July 4 in Baghdad to encourage them to join the national reconciliation project, according to a statement issued by Hakim’s office.

It seems that the fate of the Feylis might be a challenge for Erbil and Baghdad if Kurdistan independence moves forward.