Watermelon-loving Turks are discovering new benefits of the fruit, from fighting cancer to reducing impotence, and farmers who are seeing lower demand for their watermelon are hoping this translates to higher profits. 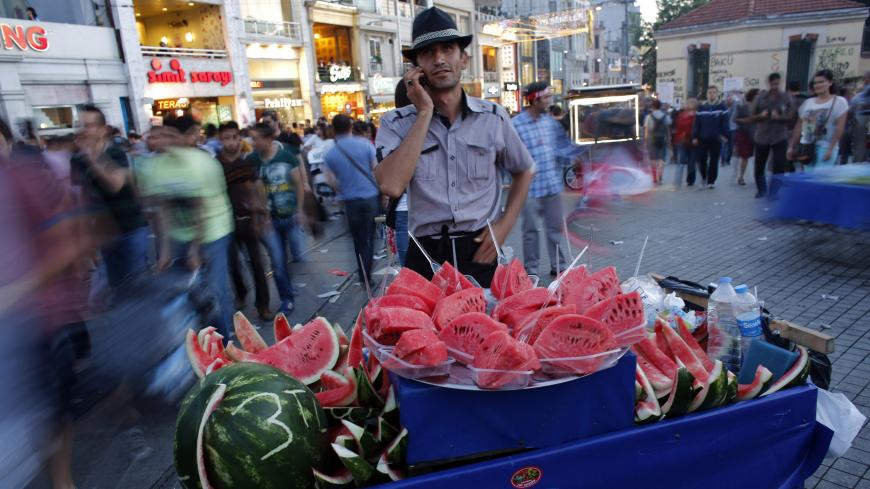 A street vendor selling watermelon talks on his mobile phone as he waits for customers at Taksim Square in central Istanbul, Turkey, June 9, 2013. - REUTERS/Murad Sezer

One of the chronic problems of Turkish agriculture has been the annual waste of overproduced watermelons in a country that is one of the biggest consumers of the fruit. Every year newspapers report an enormous waste of watermelons, whose prices crash because of inadequate demand. Faced with low prices, growers don’t want to risk the cost of harvesting the fruit and leave watermelons to rot in the field.

Semsi Bayraktar, the president of the Union of Chambers of Agriculture of Turkey, says every year about 500,000 tons of watermelons are thrown away. Turkey is the No. 2 melon producer in the world after China. Turkey produces 5.6 million tons of watermelon and other melons; domestic demand is 4.9 million tons, with 55,000 tons exported to European countries. Prices remain high in the March-May early produce period but in summer prices decline sharply. Bayraktar says in summer the prices do not even meet costs.

This year, however, there have been some signs for an increase in demand for watermelons. The municipality of Yuregir in Adana province, one of the major sources of watermelons in Turkey, has been refining molasses from watermelons, which could significantly increase demand for the fruit. Workers first extract the juice of the melon and then boil it in huge vats for eight to 10 hours. Mahmut Celikcan, the mayor of Yuregir, said that studies made at Cukurova University and Adana Science and Technology University found the molasses to be a potential cure for many illnesses, including cancer, and that a patent has been applied for what has been labeled “super molasses.” Celikcan said stopping the wastage of watermelons could contribute some $71 million (250 million Turkish liras) a year to the economy.

Professor Osman Kola of the Food Engineering Department of Adana Science and Technology University said his research shows watermelon molasses to be “a product with high potassium minerals. It also has the minerals of calcium, iron, magnesium, phosphorus, and copper. It is also rich in lycopene that contains Vitamins A and C and that gives the red color to watermelon. This compound is good against heart and vascular diseases and prevention of cancer. Moreover it is also rich with nutritional fibers that help digestion.”

Ten to 15 years ago, many doctors dismissed watermelon as being nothing more than colored sugary water. But now they say watermelon is a miracle product. Citrulline found in watermelon is turned to arginine in the body and by producing more nitric oxide in arteries, arginine can boost sexual potency. High lycopene content also can provide excellent protection against the sun’s effects and protects the skin.

A watermelon pill was produced some years ago. Mutfuoglu's patient Demirel, was said to have lost 33 pounds (15 kilograms) with a diet based on watermelon and tomato pills. While the benefits of watermelon might seem endless, not everyone sees it as a miracle fruit. For example, cardiology professor Canan Karatay, who has emerged as a popular nutrition expert, allows free consumption of eggs, meat and butter, but classifies watermelon and grapes as useless sources of excessive sugar.

Karatay has even composed a song that warns that melons can add fat to the liver, boost blood pressure and increase insulin production when it is not needed.