Following the Sousse terror attack two years ago, Britain advised its nationals against traveling to Tunisia, but the government has now suspended its warning in a move that Tunisians hope will boost the ailing tourism sector. 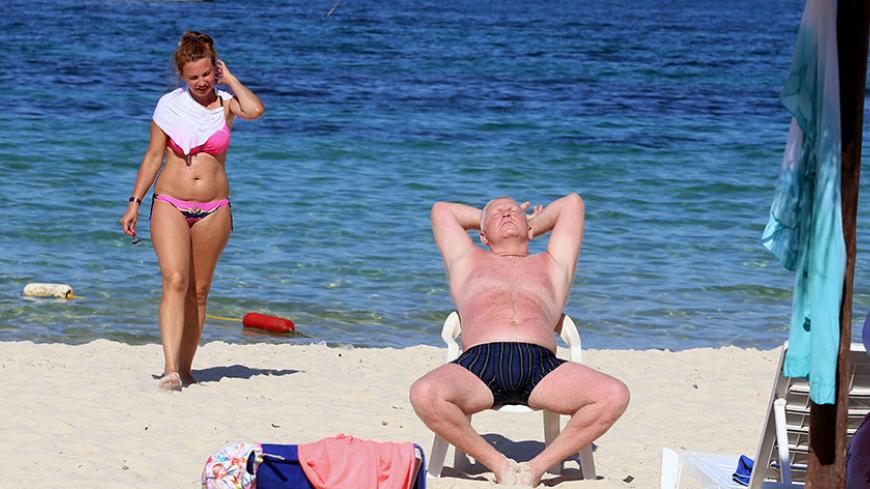 A tourist sunbathes on the beach in Sousse, Tunisia, Aug. 2, 2017. - REUTERS/Zoubeir Souissi

Alistair Burt, the British minister of state for the Middle East and North Africa, announced July 26 that his country is no longer advising its citizens against flying to Tunisia, including the capital and most resorts. In June 2015, Britain warned its nationals against traveling to Tunisia following the terrorist attack on a beach resort in Sousse, east of Tunis. British travel companies resumed their flights to Tunisia July 28.

On June 26, 2015, Tunisian national and Islamic State member Seifeddine Rezgui attacked a hotel on the beach in Sousse, killing 38 people, including 30 British tourists.

The attack dealt a heavy blow to Tunisia’s tourism sector, as several European nations warned their citizens not to travel to Tunisia over fears of being targeted by other terrorist operations. Britain considered the security measures the Tunisian government adopted not strong enough to protect tourists. Since then, Tunisia has been trying to convince the British government to cancel its warning.

Independent journalist Sharif Zaytouni told Al-Monitor, “In reality, the British decision came a little late as the security situation in Tunisia had improved more than a year ago, one year after the Sousse terror attack. Although Tunisian authorities declared that it would protect all foreign visitors, Britain was reluctant to lift its warning. Tourism agencies took this British advisory into consideration, and British travel giant the Thomas Cook Group canceled all its flights to Tunisia since the advisory was issued in July 2015. But only two days after Britain announced lifting the warning, the group resumed all its flights to Tunisia on July 28.”

Abdel Salam al-Harshi, a journalist specializing in economic affairs, told Al-Monitor, “The British decision will leave a positive impact on the economic level and will directly affect the tourism sector. Hotels consider British tourists their biggest [market], as they spend a lot of money and reserve hotel rooms for several nights. Room occupancy at Tunisian hotels had decreased to 17 million in 2016 compared to 29 million nights in 2014,” he said, citing statistics by the Tunisian Ministry of Tourism.

Harshi added, “The decision will also lead to increased revenues in the tourism sector, which had decreased by 35% following the 2015 Sousse attack compared to 2014. In the summer of 2017, the number of British tourists to Tunisia reached 8,900 compared to only 7,000 last summer.”

Harshi pointed to some indirect positive effects of the British decision, “given the political [importance] Britain enjoys in the world and Europe. He said, "By lifting its advisory, Britain acknowledges that Tunisia is a safe country for its nationals, which will encourage other foreigners to visit Tunisia. This decision has thus put back Tunisia on the world tourism map.”

The British decision clearly indicates that the security situation in Tunisia has improved after years of confrontations against jihadi groups. The year 2015 witnessed major blows against the tourism sector. The March attack against the Bardo National Museum in the capital left 23 people, 20 of them tourists, dead. The Sousse attack followed, and on Nov. 2, a bus carrying Tunisian presidential guards exploded in the center of the capital, killing at least 14 people.

In February this year, the British authorities criticized Tunisia for a lack of security protection for tourists. A British judicial inquiry found on Feb. 28 that the Tunisian police’s reaction to the Sousse attack was “shambolic and cowardly,” clearly accusing the Tunisian security forces of neglect. The Tunisian trial of 51 suspects in the Sousse attack, including six police officers, started May 26 and is still ongoing.

The British ambassador to Tunisia, Louise De Sousa, said on the local radio station Jawhara FM on Aug. 11, “The British decision came as a result of the improving security situation, the protection of touristic destinations and the successful security operations by Tunisian [forces].”

The end of Britain's warning against travel to Tunisia will not only affect the economy and the vital tourism sector, but will also have an indirect impact on the political sector as Britain regains its trust in Tunisia and its security agencies. However, although the move reflects an improvement in Tunisia’s security situation and offers new opportunities to the tourism sector, it remains a small step toward solving the economic and security crises the country is currently suffering. Successive governments have so far failed to solve the crisis that has also had social repercussions that have affected the middle and lower classes the worst.

Harshi said, “The British decision will not magically change the situation of the tourism sector. Even if tourism in Tunisia overcomes the terrorist blows, it can’t overcome the structural crisis it is suffering from. Tourism had started to decline in the late 1990s as it relied heavily on archaic elements, like beaches and traditional industries. We should follow the example of Morocco, which developed its tourism sector by restructuring its official airline and introducing a new element: cultural tourism. Millions of foreigners are pouring into Morocco each year to attend the Mawazine [music] festival.”

Britain itself will also benefit from the change, and not just its travel companies. On Aug. 9, the Tunisian Ministry of Energy received an official request from the Nur Energie Company to build a solar power plant in the south of the country. The plant is expected to be the largest in the world, built on an area of about 10,000 hectares (25,000 acres) at a cost of more than 10 billion euros ($11.8 billion).