Tunisia’s tourism sector, bolstered by increased security, continues to push on following the sharp decline it experienced in the wake of last year’s Sousse attack. 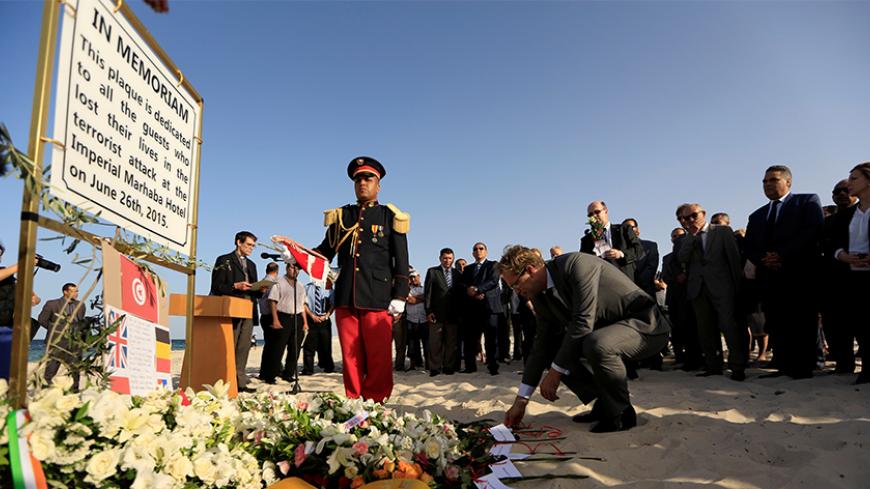 Tobias Ellwood, a British Foreign Office junior minister, lays flowers with tags bearing names of the victims on the beach of the Imperial Marhaba resort, during a memorial ceremony on the first anniversary of an attack by a gunman at the hotel in Sousse, June 26, 2016. - REUTERS/Zohra Bensemra

June 26 marked the one-year anniversary of the Sousse attack, a shooting spree by a lone gunman that claimed the lives of 38 tourists, 30 of whom were British. As soon as the attack ended, the British government announced the immediate evacuation of all British citizens in Tunisia and placed a full travel advisory on the country. This advisory has had a devastating effect on Tunisia’s tourism industry, as British tourism to Tunisia dropped 90% in the first part of 2016 compared with the same period last year.

Since the attack, Tunisia’s security sector has vastly improved its protection of touristic areas. Although memories of last summer’s horrific attack are still fresh, Tunisia’s tourism industry, bolstered by increased security, continues to push on, remaining optimistic that large numbers of tourists will return.

Imed Chatti was working as the vice director of the sports center at the Imperial Marhaba Hotel when a rapid succession of shots rang out. “Some tourists ran into the pool area, a few ran into my office. I ran out through a side entrance with some of the other ones,” he told Al-Monitor.

He pointed to a beach chair near the pool and said, “Two died here.” Looking toward another beach chair, his voice tightened. “A British man died here,” he said. “He was my friend.” Chatti was lucky to have gone home that night to his two sons and pregnant wife, yet he remains traumatized. “I’m still scared. I saw my good friend die. Now when I hear loud noises, I think it’s another attack,” he said.

Mehrez Saadi, the manager of the Imperial Marhaba Hotel, which has not yet reopened to clients, told Al-Monitor that all staff members individually visited psychiatrists after the attack. “The psychiatrists told us that we should continue to work in order to face our fears rather than run away from them.”

Although Tunisia’s tourism industry is struggling to stay afloat, Saadi said he has received numerous job offers. “I have gotten many offers, even some for work outside Tunisia, but I want to stay here and get this hotel back to the way it was. We hope to reopen as soon as we can.” Saadi’s only major complaint is the Foreign and Commonwealth Office’s travel advisory for the United Kingdom, which prevents British tourists from getting travel insurance. “The UK government needs to remove the travel ban. Security is much better,” he added.

Saadi is correct in this regard. At least three security officers with military rifles are positioned at each street leading to Sousse’s beach. Additionally, army trucks are positioned near all hotels, often searching cars. Tunisia’s National Guard even has a boat positioned outside of the Imperial Marhaba Hotel, with agents patrolling the beaches. This is a far cry from Sousse at the time of the attack, when Seifeddine Rezgui’s massacre lasted for almost 30 minutes without police intervention.

Even a survivor of the Sousse attack, Colin Bidwell, chose to return to Tunisia for the one-year anniversary. “It’s been very difficult, but since visiting, I’m feeling a lot better. I hope they lift the travel advisory in time for next summer,” he told Al-Monitor.

Such rosy views of the country are encouraging, but it is true that Tunisia still faces its fair share of security threats. In November 2015, a suicide bomber targeted a presidential guard bus, and in March, Islamic State-linked militants swept into the town of Ben Guerdane and battled with security forces. However, as political and security analyst Youssef Cherif pointed out, “Not a single attack on tourists/tourist facilities was reported in Tunisia since the Sousse attack a year ago.”

At the time of the shooting, despite the slow response of security forces, Tunisian citizens acted as heroes. Salem Ben Youssef heard the sound of gunshots and looked out from his souvenir shop, which was located only dozens of meters away from the Imperial Marhaba Hotel grounds. “I saw tourists running toward me. I asked them if those were real gunshots and they told me yes,” he told Al-Monitor.

Although Ben Youssef is too humble to admit it, he saved the lives of many tourists that day, as he hid 40 of them in his shop, locking the door to prevent the shooter from entering. The shooter was later shot dead by police only steps away from Ben Youssef’s shop.

Ben Youssef added, “It was a catastrophe. Tunisians are not like this. We are normal people. We want to eat, work, sleep. We love our families. That’s all. That guy was crazy.” Many other individuals expressed this same sentiment to Al-Monitor. Additionally, almost all tourism workers interviewed for this article also expressed what Ben Youssef believes: “This isn’t Islam. These people are crazy. They aren’t Muslims. Muslims are peaceful. We only use force in self-defense. This guy was crazy.”

A year after the attack, Ben Youssef admitted that the tourism industry is really struggling. “The British aren’t coming anymore. A lot of Russians are here, but they don’t spend a lot of money,” he said.

Saadi added, “We need to rebuild from the ground up. We are grateful that Russians are coming.”

Leila Ben-Gacem, the owner of a small guesthouse in the old city of Tunis, told Al-Monitor, “The Russians are probably spending the same amount of money as the British. It’s just that people are more desperate for money now.”

Since the wave of attacks targeting tourists swept through Tunisia, Ben-Gacem acknowledged that her business has struggled. “After the Bardo attack [in March 2015], I immediately received 11 cancellations. By the time the Sousse attack occurred, I had so few clients that it didn’t even make a difference for reservations,” she added. Despite the tourism industry’s slow recovery process, Ben-Gacem remains optimistic.

“I am hopeful for the future, but we have to solve challenges. First, how can we keep up a high level of service, even when income is going down? Second, how can we diversify our offerings, so it’s not just about sunbathing, swimming and eating?” she asked.

She believes the Ministry of Tourism is too “old school” and is not open-minded to the idea of diversifying the tourism sector.

However, Ben-Gacem is sure that Tunisia’s tourism industry can flourish. “We have such a rich history and cultural heritage. We should focus on educational seminars and festivals, rather than just focusing on beachgoers,” she said.

Saadi also remains optimistic. “We will return to the level we were at before. People love our hotel and city. Many are repeat guests. I met two women yesterday who had been to Tunisia 18 times over the past five years,” he said.

Walking through the lobby of the Imperial Marhaba Hotel, one can only imagine what it used to be like. A beautiful crystal chandelier hangs from a vaulted ceiling, which houses open levels of the hotel looking out onto the lobby. It is no wonder why so many people return to stay at the hotel, as it is truly enchanting. Tunisians across the country hope that this enchantment will be enough to entice tourists to return.