Syrian Democratic Forces have found an increasingly desperate detachment of militants using drugs, including amphetamines, to keep themselves in the fight. 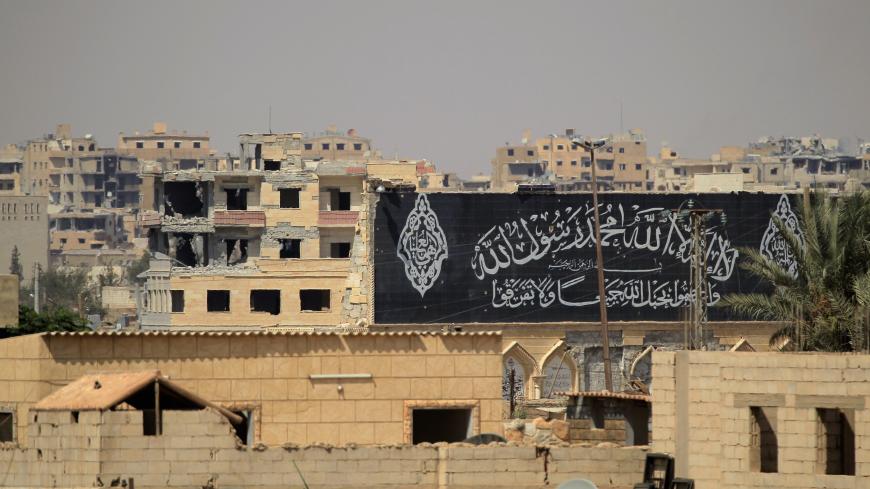 A banner belonging to Islamic State fighters is seen during a battle with Syrian Democratic Forces in Raqqa, Syria, Aug. 16, 2017. - REUTERS/Zohra Bensemra

Encircled on all sides by US-backed Syrian rebels and cut off from municipal services in Raqqa, captured Islamic State (IS) fighters are showing increasing signs of malnutrition and drug use.

Among a handful of IS fighters who have surrendered in the Old City, where some 2,500 militants remain, Syrian Democratic Forces (SDF) have found track marks indicating the use of amphetamines. Leaders of the US-led coalition to defeat IS in Iraq and Syria say the condition of IS fighters shows the increasing desperation of militants to keep themselves awake and in the fight.

“As the central services, as water turns off, it makes it very difficult to sustain oneself,” said Col. Ryan Dillon, spokesman for Operation Inherent Resolve, in response to a question from Al-Monitor. “This was a relatively new report of some of these fighters using some sort of drugs to keep them alert and keep them going.”

"As far as I know, this is the first time for me seeing and getting reports on the use of track marks or some kind of intravenous way of keeping yourself above order,” Dillon added. US officials declined to assess how long IS might be able to hold their increasingly tenuous position in the Old City.

Dillon’s comments come 73 days into the fight in Raqqa, as coalition forces have cleared about 55% of the city. Detainees captured by US-backed forces in Syria are sent to local judiciary councils for trial, but American troops may have a chance to interrogate them before they are sent to confinement if the fighters are found on the front lines.

IS fighters have used an extensive network of underground tunnels to stay resupplied, and they have also used improvised explosive devices in the past two days to launch failed counterattacks, according to US officials.

As the group is confined to smaller sections of the Old City, the United States is training more local volunteers to hold the city. On Wednesday, Dillon told reporters at the Pentagon via video link from Baghdad that the Raqqa Internal Security Force, tasked with holding the city once it is liberated, had trained 180 more officers.

Coalition officials say the force will eventually resemble the demographic composition of Raqqa itself, with about 80% Arab fighters and 20% Kurds.

“The SDF continues to pressure the enemy,” Dillon said. “They plan to make those fighting them bleed for every inch.”