The Turkish government reshuffled the top echelons of the military as the trial of more than 500 alleged coup plotters got underway. 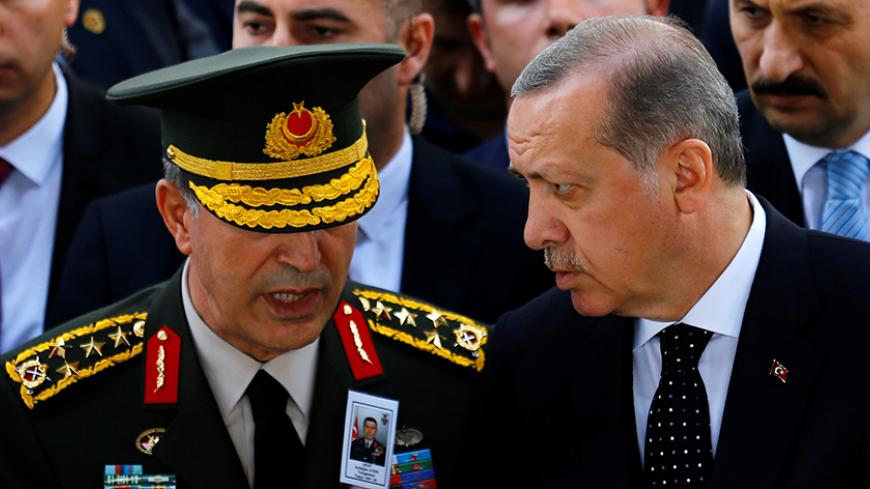 Turkish President Recep Tayyip Erdogan and Chief of Staff Gen. Hulusi Akar chat as they attend the funeral of Maj. Gen. Aydogan Aydin who was killed in a helicopter crash in Sirnak, on Wednesday, at Ahmet Hamdi Akseki Mosque in Ankara, Turkey, June 1, 2017. - REUTERS/Umit Bektas

After months of speculation, Turkey’s chief of the General Staff, Hulusi Akar, survived a shake-up of Turkey's top brass on Wednesday that saw the heads of the army, the air force and navy replaced. Doubt had fallen on the prospects for Akar’s continued leadership after the failed July coup attempt last year and conflicting accounts of his actions that day.

Guler’s shift to the Land Forces Command suggests that the path has been cleared for him to become the next chief of the General Staff when Akar, whose handling of the coup is seen by many as riddled with contradictions and incompetence, likely retires next year. As Al-Monitor columnist Metin Gurcan has noted, Guler is known for his ferocious opposition to Fethullah Gulen, the Pennsylvania-based Sunni cleric the government has accused of orchestrating the July 15 coup.

At a panel in Washington last month, Guler described the botched putsch as a “terrorist act” and called Gulen the leader of a “radical terrorist organization.” Fellow panelists rejected the notion that Gulenist perpetrators had joined forces with militantly pro-secular “Kemalist” officers in the attempt.

Hakan Yavuz, a political scientist at the University of Utah, said, "The argument that Gulenists allied themselves with ‘Kemalist’ officers isn’t viable, because Gulenists would never ever even sit with the Kemalist officers, because they would hide their true identity at all times." The 63-year-old general is known as a a pugnacious advocate of Turkish military intervention in Syria and of armed support for the Syrian rebels.

The reshuffle of the top military echelons coincides with the second day of the trial of nearly 500 people on charges of taking part in the coup. Gulen, the main defendant in the case, is being tried in absentia. The others include a former air force commander, Akin Ozturk, and other commanders from Ankara's Akinci air base, which is said to have been the nerve center of the failed operation. President Recep Tayyip Erdogan, Akar and the main opposition leader, Kemal Kilicdaroglu of the Republican People's Party, among others, have petitioned the court to testify at the hearings.

The debate over who led and organized the coup has not abated, but some prominent columnists in the pro-secular media have echoed Guler’s assertion that the Kemalists had nothing to do with the coup. Such labels can, however, be misleading, and power often trumps ideology in Turkey’s once-omnipotent armed forces. Kemalist credentials long served as a fig leaf for those eager to rise in the ranks. In today’s Turkey, unswerving loyalty to Erdogan topped with a dollop of overt piety appears to be the formula for success.

One consensus opinion is that many Gulenist officers who knew they were going to be purged last year by the Supreme Military Council were at the forefront of the putsch but that assorted others opposed to Erdogan were involved as well. This explanation chimes with the broader pattern of Gulen marshaling all of his now-mostly-purged disciples in the security services and the judiciary to overthrow Erdogan. Another common narrative is that Erdogan had caught wind of the coup, but allowed it to unfold anyway, so he could smoke out his enemies.

In any case, Erdogan has used the coup as a pretext to crack down on myriad adversaries, real and perceived. Thousands of officers, including at least 149 generals and admirals, and hundreds of military attaches posted at NATO facilities across Europe and the United States have been fired, prompting comments that the Turkish Armed Forces, NATO’s second-largest army, is a lame duck. An administration official recently told Al-Monitor, “We have few people left in the Turkish military that we can talk to. And the rest are too scared.”

On the bright side, military tutelage, at least on paper, is no longer a threat. Under new rules rammed through by the government last August, the land forces, navy and air force now all report to the minister of defense, a civilian. All military-run academies and lycees have been shuttered, and the president will appoint the rector of the National Defense University being established in their place.

Graduates of Islamic clerical training schools, previously shunned by the military, will be permitted to enroll. Thus technically speaking, in the new Turkey, one can simultaneously be an imam and a general, rather like the Ottoman sultans, who were both caliph and commander. Then again, Erdogan might want to reserve those titles for himself.

Correction: August 3, 2017. An earlier version of this article said that Yasar Guler rejected the notion that Gulenists had joined forces with Kemalist officers in last year's coup attempt. The quote in question was instead from Hakan Yavuz. Apologies.