Turkey’s top commander may be on his way out

The Turkish president soon will decide whether to keep his embattled chief of general staff for a while or replace him immediately. 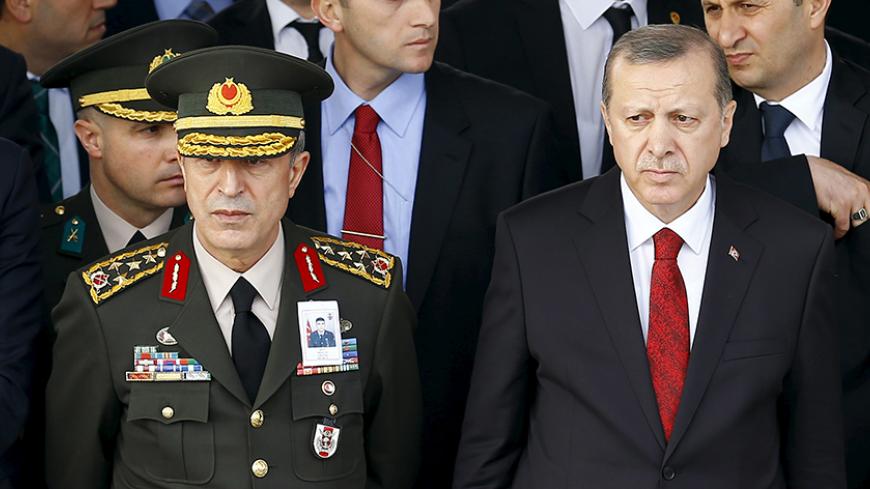 Turkish Chief of General Staff Gen. Hulusi Akar has been having a tough time the past couple of months. Turkish media printed his high school photographs with Turkey’s most prominent conservative ideologue, Necip Fazil, followed by photographs of him as a lieutenant with former President Abdullah Gul and notable right-wing columnist Fehmi Koru.

These aren't people the military looks upon favorably, and Akar suddenly found himself in the midst of a debate about his conservatism. Even more damaging has been the testimony of soldiers on trial for the July 15 coup attempt who said Akar did not try hard enough to foil the uprising and, even though he was not interned, opted to passively observe the developments of that fateful night.

Officers who were discharged about five years ago from the Turkish Armed Forces (TSK) because of their alleged involvement in the Ergenekon and Sledgehammer coup plot cases are accusing Akar of failing to notice pro-Gulen officers had penetrated his own offices. Erdogan blames followers of exiled cleric Fethullah Gulen for the coup attempt.

Opposition parties allege the attempt actually was to have been a "controlled coup" in which Akar played a major role. These charges, which are being widely discussed, emphasize Akar's dismal management of the crisis.

Recently there has been an increase in newspaper comments charging Akar with failing to block the coup attempt by not confining troops to their barracks, as is done during times of crises. The eight-page written testimony Akar sent to the Parliamentary Investigation Commission — after an eight-month delay — was not enough to put the accusations against him to bed.

Akar's fate will be determined by the Supreme Military Council, which will convene the first week of August and is to be chaired by President Recep Tayyip Erdogan. But the perception is that Akar’s image has been irreparably tarnished and that such accusations are likely to continue.

The fate of civilian politicians used to be determined by the chief of staff; today, Akar’s fate lies with Erdogan.

Curiously, while Akar has been pummeled with accusations incessantly for the past two months, Erdogan has been remarkably silent. Erdogan has not said anything that could imply support for Akar or help repair his image.

Erdogan faces three choices: Continue with Akar for one more year, thus backing him despite his rapidly eroding public image; go with what could be termed a "dishonorable discharge," terminating Akar’s term — that would associate Akar with the July coup attempt and possibly open the way for legal proceedings against him; or grant Akar an honorable retirement, easing him out with all his personal rights and the usual fanfare.

Which option will Erdogan prefer? If he wants to keep the failed coup in the public eye, he is likely to keep Akar for one more year. But if Erdogan thinks that it's time for normalization and that the country needs a new start, he will replace Akar and the branch commanders who were detained by the putschists that night.

I personally think Erdogan, as he hasn't responded to the escalating criticism of Akar, will decide Akar should retire at the beginning of August. Whether Akar ends his service with a dishonorable discharge or honorable retirement will depend on his strategic bargaining with Erdogan — though I don’t think Akar has much left in the way of negotiating leverage.

Should Erdogan decide it's best to end Akar’s term, the question then becomes who will replace him.

We have to keep in mind that since the coup attempt, commands of land forces, the air force and the navy — which used to be under the absolute control of the chief of staff — are now attached to the civilian-run Ministry of Defense. With such radical changes and other military reforms carried out since July 15, and since Erdogan's powers expanded greatly following a constitutional referendum April 16, the chief of staff's influence with the executive presidency and authority over branch commanders have significantly weakened. The chief of staff, who in the past used to shape the civilian politics of the country, has become a “coordinator/consultant’’ subordinate to the executive presidency. The chief of staff is very aware of the change and has been discreetly trying to preserve his standing in the protocol lineup.

But the chief of staff position is becoming a coordinating agent of symbolic importance who reports directly to the executive president. Bearing that in mind, who might be the next chief of staff?

The air force command has been lobbying for an air force general to become the chief of staff; that aside, there are three likely candidates. The first is the current commander of gendarmerie forces, Gen. Yasar Guler, who was detained and interned by the putschists. He is known for his anti-Gulen views and nationalist identity. Guler’s hawkish attitude of combating terror, his high media visibility and overall good relations with politicians, including the ruling Justice and Development Party, make him a good chief of staff candidate.

Another candidate is Deputy Chief of General Staff Gen. Umit Dundar, who, as the coup was in progress, appeared on TV to voice his opposition to the putsch attempt and show the public that the uprising was not approved by the chain of command. His low-profile shunning of contacts with the media for the past year, his polite demeanor and efforts to transform the TSK have resulted in plenty of praise.

The final likely candidate is Gen. Metin Temel, who was lieutenant general in charge of combating terror in southeast Turkey. For his robust anti-coup position, he was much praised and appointed commander of the second army, which is responsible for operations in Syria, Iraq and most of southeast Turkey. He is known for his hawkish anti-terror attitude, anti-US sentiments, field experience and fierce anti-Gulen stance. With his "fighting general" image, he is one of the most popular generals in Ankara.

July will be an interesting and eventful period. If Erdogan signals he doesn’t want to continue with Akar, we have to keep in mind that the traditional TSK criteria such as seniority and rank, which used to decide the next chief of staff, are not valid anymore. In the end, we can be sure Erdogan will choose a chief of staff he can easily work with and who will be absolutely loyal to the executive president.

Correction: (June 15, 2017): An earlier version of this article incorrectly stated that Gen. Metin Temel had been promoted to four stars. Apologies.