Hamas leaders believe that Israeli Prime Minister Benjamin Netanyahu is preparing for a military operation in the Gaza Strip to distract attention from police investigations against him. 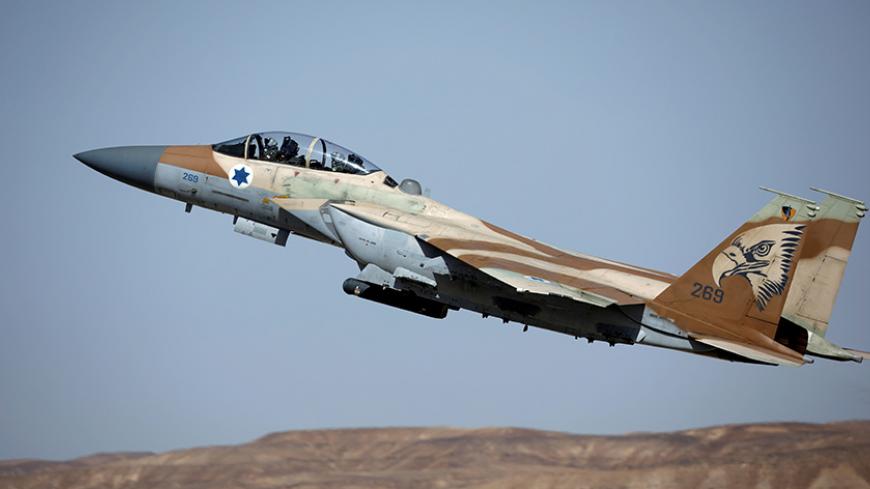 An Israeli F-15 fighter jet takes off during an exercise dubbed "Juniper Falcon" held between crews from the US and Israeli air forces, at Ovda Military Air Base, southern Israel, May 16. - REUTERS/Amir Cohen

Hamas has assessed that Israeli Prime Minister Benjamin Netanyahu is planning a military operation in the Gaza Strip to deflect public opinion from the criminal investigations against him in Israel. On Aug. 9, Israeli air force planes attacked two Hamas targets in northern Gaza in response to the firing of a rocket from Gaza that landed in an open area of the Hof Ashkelon Local Council. The attack on Hamas’ military posts and on the Shati refugee camp — where Ismail Haniyeh, the head of Hamas’ political bureau, lives — was viewed by the movement's leadership as additional proof of their assessment that Israel is planning an escalation and preparing for a major military operation.

The heads of Hamas’ military wing, Izz ad-Din al-Qassam Brigades, view the airstrikes as a clear attempt to draw Hamas into a confrontation. The announcement the organization made immediately after the attacks leaves no room for doubt about how they see the situation: “This is crossing a dangerous line for which Israel will bear the consequences. We will not allow Gaza to be turned into a testing field for Israeli ammunition.”

Tensions between Israel and the Gaza Strip in the last week reached heights not seen since the cease-fire at the conclusion of Israel's Operation Protective Edge in 2014. Al-Monitor learned that the organization’s military wing has beefed up its military forces along the length of the border with Israel. Hamas' military posts, including the two hit days ago, are now manned 24/7 due to concerns about an Israeli invasion.

Even if Hamas' evaluation of the situation is not based on verifiable sources but on circumstantial evidence alone, it shows that the group's higher-ups are well-informed about what goes on in Israel. The movement’s leaders receive a collection of translated news bits and commentaries from the Israeli media on a daily basis. In addition, they have access to analyses by Israel experts voicing their opinions on the politics and diplomacy behind events. Of course, Hamas is mainly interested in how events might affect the Gaza Strip.

This is not the first time that Hamas leaders have been convinced that Israel was planning a military operation to divert public opinion from domestic issues. They also thought this just before Operation Cast Lead in 2008. Some among the leadership, including Haniyeh and Mahmoud al-Zahar, argued that Israel was planning a comprehensive military operation to bolster Ehud Barak’s political standing. At the time, Barak was defense minister and Labor Party chairman, and general elections were scheduled for early 2009. This line of thinking was explicitly conveyed to me by Zahar and Abed Haniyeh, son of Ismail Haniyeh.

“Barak is planning a war on Gaza to cover up his screw-ups,” Zahar said. In a conversation a week before Operation Cast Lead, Haniyeh’s son asked me in all seriousness whether the Israeli public was aware that Barak was dragging the Israeli army into a war simply to improve his standing in the polls prior to the elections. My assertion that no Israeli statesman would ever initiate a war for political considerations was met with contempt by both men. Given that military operations indeed began a week later can easily explain why this view is widespread today among the Hamas leadership.

A Palestinian journalist from Gaza speaking on condition of anonymity told Al-Monitor that residents along the border with Israel in northern Gaza are saying that Hamas has been beefing up its forces since the beginning of the month, including posting lookouts to track the movement of Israeli forces. According to the journalist, Hamas’ military wing is only deployed in emergencies and when tensions between the sides increases. “The inhabitants here know that when there is movement along the length of the border, that is a sign of imminent war, and then they prepare as well,” he said.

One of the Hamas members with whom I spoke confirmed that the movement’s leadership is taking seriously the possibility that Netanyahu will initiate military moves. “We are prepared for anything and everything,” he said on condition of anonymity. “This is also what we said today, that we will not sit silently by while Israel starts up with us.” He added that residents and policemen had been injured in the Aug. 9 attack. He warned that the patience of Izz ad-Din al-Qassam Brigades will ultimately be worn down.

Meanwhile, the Israeli side is keeping a close watch on Hamas’ preparations for another confrontation. Maj. Gen. Eyal Zamir, the head of the Israel Defense Force's Southern Command, revealed Aug. 9 that Hamas has been working on restoring the terror infrastructure destroyed in the 2014 confrontation. Zamir told Israeli journalists that Israeli intelligence efforts have continuously worked to uncover Hamas’ military infrastructure since Operation Protective Edge. He said, “Hamas is operating in a civilian arena and under the cover of a civilian population, preparing its infrastructure for the next conflict within the civilian arena, such as civilian residences, schools and mosques. In these buildings are [military] headquarters, storerooms of weapons and rocket launchers.”

Even if Hamas' concerns over a politics-driven military confrontation are baseless, it would be a mistake to ignore them. This is because the concerns themselves and resultant tensions could lead to violent conflict. Take, for example, what happened this week with the rocket shot at Israel, most likely by one of the rogue organizations in the Gaza Strip that does not obey the Hamas leadership. Hamas argued that Israel made up the rocket story to ratchet up tension in Gaza and views the Israeli response as an attempt to escalate the violence. The actual facts of the incident do not make much of a difference.

The bottom line is that when each side misreads the intentions of the other, it can draw both into a round of fighting. Hamas is convinced that Israel is gearing up for a war by the end of the summer. Anyone who wants to avert this next conflagration had best convince them that they are mistaken.