The refusal of Defense Minister Avigdor Liberman to follow the line requested by the bereaved Goldin and Shaul families demonstrates his willingness to take the heat. 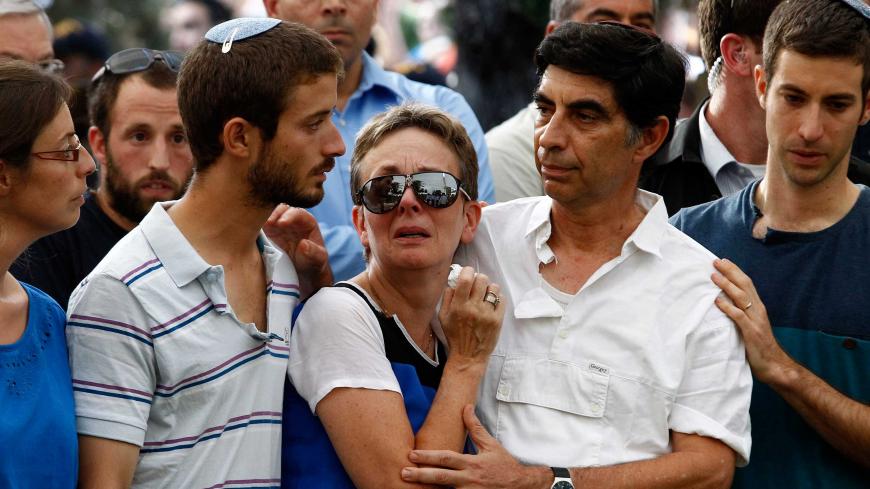 The Goldin family has been waging a media battle to have the body of their son, Lt. Hadar Goldin, returned to Israel for burial. Goldin was killed in 2014 in Operation Protective Edge, and Hamas refuses to hand over his remains. The Goldin family recently targeted Defense Minister Avigdor Liberman in its campaign.

On Aug. 25, Col. (Res.) Lior Lotan resigned his position in the prime minister's office as coordinator on POWs and MIAs. This only intensified the feeling of betrayal among the Goldin family and the family of Oron Shaul, another soldier whose remains are being held by Hamas. They had regarded Lotan on the job as proof that there was a channel in place for bringing their sons home. His resignation was the straw that broke the camel's back. At an angry press conference at their home in Kfar Saba, the Goldin family charged that Liberman was a “weak coward.”

The background to this eruption was a statement by Liberman. Israel, he said, “must not repeat the mistakes of the [Gilad] Shalit deal. As part of the deal, we released 1,027 terrorists, among them murderers and their handlers including Mahmoud Qawasmeh, who was expelled to Gaza and funded the kidnapping of the three teenage boys, and Yahya Sinwar, who leads Hamas in Gaza. … Some 202 people released in the Shalit deal have since been arrested by the security forces for their involvement in terrorism.”

The Goldin and Shaul families claim that the statement was all spin by the defense minister. They have never demanded the release of terrorists in exchange for their loved ones' bodies, but rather that pressure be exerted on Hamas.

“Any defense minister who says what he said today has no moral right to make decisions, command the army or lead it into battle,” said Hadar's father, Simcha Goldin. “Liberman is good at talking and weak in acting.” He continued, “We demand the implementation of the Cabinet's decision of last January that Israel will not return the bodies of Hamas terrorists, and that it will immediately halt all visits to prisoners held in Israeli jails. It's time to put an end to this day camp.”

A clash like this, pitting a politician against the family of a fallen soldier, is always a highly charged situation. After all, such families have paid the steepest price of all.

A clash like this, pitting a politician against the family of a fallen soldier, is always a highly charged situation. After all, such families have paid the steepest price of all. To make matters worse, this particular case pits a minister in the government that sent their sons into battle against two families who not only lost their sons, but who also have no grave at which they can properly mourn. Hamas continuing to hold their sons' bodies has led the Goldin and Shaul families to wage a public and media battle for the past three years just to get their remains.

It is not only the right of the Goldin and Shaul families to criticize the government and pressure its top ministers in any way they can so as to get their sons' bodies back. They are even obliged to do this. On the other hand, the defense minister and Prime Minister Benjamin Netanyahu alike are obliged to consider the whole picture. Israel's foreign and defense policies cannot, and must not, be based on emotions.

Liberman actually showed his mettle as a leader by refusing to make false promises to the Goldin and Shaul families and by not succumbing to cheap populism to win public support. He is prepared to suffer the blows and insults for his performance as defense minister.

In an Aug. 28 interview with the Walla website, Liberman tried to explain his position. He said, among other things, that the conquest of Gaza or its surrender are the immediate options for obtaining the release of two Israeli citizens also being held by Hamas and the two soldiers' bodies. Every other solution, he asserted, requires patience and perseverance. Pressure, whether from the public or the media, only weakens Israel's position.

In media interviews and at the press conference, Simcha Goldin tried to determine for the government how it should react toward Hamas and what it should do to apply effective pressure on the group. Both families are furious at Liberman, who said that the government should adopt the recommendations of the Shamgar Committee, which in 2012 set clear rules for how to negotiate for the release of abducted soldiers and civilians. What was effectively offered were a series of red lines to prevent deals like the Shalit deal from being repeated. The committee was appointed by former Defense Minister Ehud Barak in 2008, when Shalit was still being held by Hamas.

The Shalit swap was a watermark in the Israeli public's attitude toward prisoner deals. The joy felt over his return was accompanied by a sour taste over the heavy price that Israel paid for it, including the release of more than 1,000 terrorists. As was soon learned, many of the prisoners released in the deal soon returned to terrorist activities.

In summer 2016, Yesh Atid Knesset member Elazar Stern, a major general in the reserves, proposed a law to determine the principles that should underlie any future prisoner exchanges, based on the recommendations of the Shamgar Committee. Stern called on the Cabinet and the government to adopt these recommendations and pass his proposed law. In interviews with the press at that time, Hadar's mother, Leah Goldin, attacked Stern, claiming that he did not know anything about democracy. “His effort is driven only by fear, hysteria, and [is an] attempt to clear his own conscience,” she claimed. “He’s creating more barriers to negotiations [for the return of the two soldiers’ bodies].”

After the 2016 reconciliation agreement between Israel and Turkey, the two families again attacked the government, claiming that the prime minister had broken his promise to them to tie the return of their sons' remains to any future agreement with Turkey. After the Cabinet approved the agreement — with Liberman opposing it — the former head of the South Command, Yoav Galant, explained that the agreement “is vital to Israel's security and to stability in the region. … There are compromises in every agreement, but our responsibility in the security Cabinet is to identify what is strategically important for the long term.”

In this instance too, the Goldin family led the fight in the media, rejecting the claims of national security that led to the signing of the agreement. On Aug. 22, the family called the plan to reopen the Rafah crossing a “moral and ethical failure.”

No one disputes that the Goldin and Shaul families have the right to make demands on the government. What they cannot do is determine Israel's defense policy.