Why Israel-Turkey deal didn't include return of IDF soldiers' remains

Israel's Cabinet ministers made the decision that in the case of the agreement with Turkey, national interest prevailed over the human concern to return the bodies of killed soldiers. 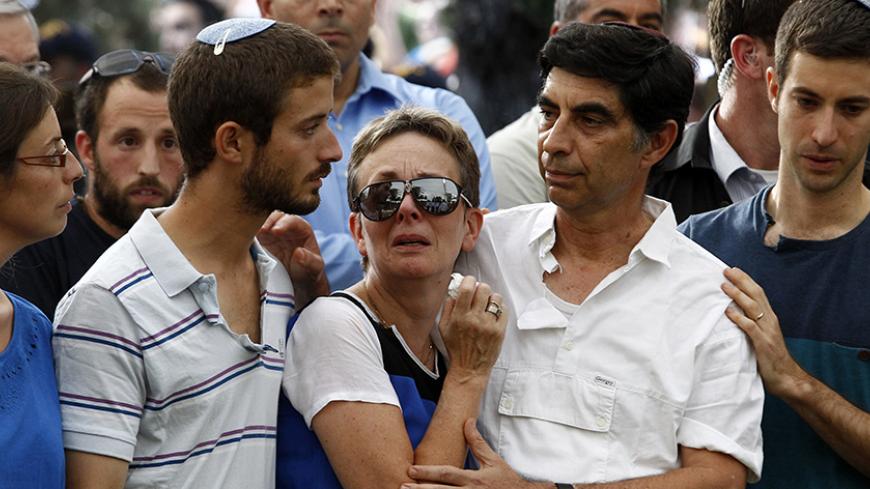 One by one, the members of the Security Cabinet stopped their cars beside the protest led by the parents of soldiers Hadar Goldin and Oron Shaul on the morning of June 29. These families wanted to convince the ministers to oppose the reconciliation agreement with Turkey. The public and political fight against the agreement was launched by the families as soon as they realized that the agreement would not include the return from Hamas the remains of the two soldiers killed in Operation Protective Edge in 2014.

As they made their way to the Cabinet meeting in the prime minister’s office, the ministers got out of their cars, spoke with the families, and embraced them. It was obvious to everyone involved that at that stage, the chances that the agreement would not be approved were meager. The agreement was indeed approved.

The criticism and rage that the families later voiced toward Prime Minister Benjamin Netanyahu are comprehensible, at least on an emotional level. In addition to the terrible tragedy that they already faced with their sons' deaths, they are now being forced to contend with another burden: the ongoing struggle to have the remains of their loved ones returned to them. Nevertheless, there is something confusing about their demands that if Hamas refuses to return the remains, the ministers must stop everything and withdraw their support for the reconciliation agreement with Turkey, which is so vital to Israel’s diplomatic and security interests.

Simcha Goldin, the father of Lt. Hadar Goldin, described the approval of the agreement without the return of the bodies as “a huge failure, and the prime minister bears responsibility for it. He sent our sons into Gaza, so he is responsible to get them out.” In media interviews, Goldin said that in his meetings with Netanyahu, the prime minister assured him that any deal involving Gaza would include the return of the soldiers’ bodies, but, “He did not keep his word. More than one minister told me that particular clause was part of the earlier talks, but that it was dropped.”

A conversation like this, assuming it took place, is problematic as far as Netanyahu is concerned. The prime minister should not be negotiating with the parents of fallen soldiers over matters that impact the State of Israel’s vital interests. He should certainly show empathy. He should take many different factors into consideration, including the suffering of families, whose sons were sent by the state on a military mission. Ultimately, however, as prime minister, he must detach himself from the emotional aspect and make a decision that matches the broader national interest.

In the conference room, where the Cabinet met, members of the defense establishment presented the ministers with their positions in support of the agreement by providing a comprehensive overview of the situation. The ministers were told, among other things, that the agreement would allow Israel and Turkey to cooperate against Iran again, and to take action against the growing Iranian presence in Syria and Lebanon. They also made it clear to the ministers that if the agreement is not approved, the crisis between the two countries would only get worse, harming Israeli interests. These are national interests of the highest order for Israel, while the region is in turmoil. Placing this in opposition to the families’ demands leaves a state of emotional confusion.

This is not the first time that emotional and human concerns have attempted to take precedence over Israel’s national interests. On some occasions they succeeded, as happened with the agreement that led to the release of another soldier, Gilad Shalit in 2011, or of Elhanan Tannenbaum, a civilian, in 2004.

About a thousand prisoners, some of them murderers, were released from prison in exchange for a single soldier abducted by Hamas. The Shalit deal — the most expensive ever — was a response to the yearnings of a public that regarded Shalit as the “child of all of us,” due to a particularly successful campaign. Some of the prisoners released in the Shalit deal went back to committing acts of terror, just as sources in the Israeli security establishment predicted. Was Shalit’s release in exchange for them in the national interest? Obviously not.

Tannenbaum, who was abducted by Hezbollah under problematic circumstances, was released in a deal that involved the release of hundreds of prisoners. Then-Prime Minister Ariel Sharon preferred the personal, human considerations over the national interest.

The mingling of the emotions with the national interest is not some development of the past few years. It is a process that reached its climax with the Shalit deal, but which also led to soul searching and the realization that some of the toughest dilemmas leaders faced encompass the human component of the individual, his suffering, and his expectations that he will not be abandoned in the hardest times.

Some believe that the watershed moment in the relationship between families and the country’s leaders was the release of the eight Nahal Brigade soldiers from the First Lebanon War in the two Jibril deals in 1983 and 1985. These deals are etched in the country’s collective memory as signs of the government’s weakness and surrender to terrorist organizations. This is not only because thousands of prisoners were released for eight soldiers. It is also because the circumstances in which the soldiers were taken captive were far from heroic. There was no battle; in fact, they didn’t fire a single shot even though they were armed. At the time, Nahal Commander Brigadier General Yoram Gilboa even called them cowards. It is hard to imagine any IDF officer calling the “children of all of us” cowards today.

The struggle of Miriam Grof, mother of the soldier Yosef Grof, is the most memorable case in that particular prisoner exchange. She would not ease up on decision-makers until her son was returned home in May 1985 with the second Jibril deal. Then, too, it was obvious that the deal ran counter to the public interest. For example, Labor Party Minister Yitzhak Navon (Israel's president later on), who was known to be a warm person with close, unmediated ties to the public, opposed the first Jibril deal in 1983, saying in a Cabinet meeting that the state should tell the prisoners’ families that there is a line that the state cannot cross.

These days, when emotions are so intertwined with the national interest, very few politicians or military leaders would dare to express themselves that way. In an age of reality TV, with people so intent on chasing public support, it's practically impossible to imagine the ministers who voted for the reconciliation agreement with Turkey courageously confronting the families and saying that which should be obvious to everyone.