Israel won't compromise on the return of the bodies of IDF soldiers, and Hamas Gaza leader Yahya Sinwar won’t compromise on a large-scale prisoner-exchange deal. 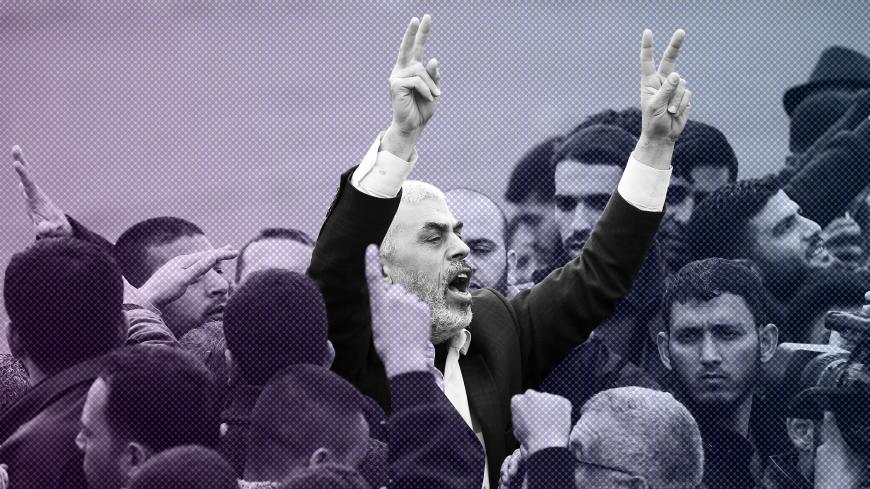 Israel and Hamas are caught up in an endless circle, made up of two conflicting narratives, each set in stone. The vectors of these two forces leave both Israel and Hamas trapped in a blood-soaked alleyway with no apparent way to get out.

Both are ready for a long-term solution to reduce tensions in Gaza. A perfect example of this was the speed with which Hamas leaders pleaded with every possible mediator between them and the Israelis on July 20 to help stop the exchange of gunfire and reinstate the cease-fire. Similarly, there was the speed with which Israel had enough of its formidable wave of airstrikes and returned its sword to its sheath.

Hamas knows exactly what to expect if it launches another round of warfare against Israel. Israel also knows that such a round of fighting would result in the deaths of dozens of its troops and maybe even a few civilians, too, just as its predecessor in 2014 did. Once another such round would be over, things would simply stand as they were before, back at square one. The futility of it all is frustrating, but almost inevitable.

Hamas holds the bodies of two Israel Defense Forces (IDF) soldiers, Hadar Goldin and Oron Shaul, who died in the 2014 Protective Edge operation. Israel demands that the bodies be returned. Gaza leader Yahya Sinwar cannot allow himself to return the bodies without receiving a hefty payment in Palestinian prisoners. Israel can’t allow itself to release Palestinian terrorists in exchange for the corpses of its soldiers, but it also can’t reach any agreement with Hamas before the bodies of these soldiers are returned to Israel for burial. Neither party can break through this barrier, so they are trapped in the same blood-soaked alleyway in a situation that repeats itself regularly with the precision of a Swiss watch. At this point, it is every weekend.

Talking to Al-Monitor on condition of anonymity, one Israeli minister described the situation as, “The Goldin family is terrorizing the Cabinet.” It is a cruel, tasteless statement, lacking even a modicum of tact. He was talking about a family that sacrificed one of its sons, Lt. Hadar Goldin, the nephew of former Defense Minister Moshe Ya’alon. They rightfully expect their son’s corpse to be returned to them so that it can be brought to Israel for burial. In exchange for the return of Goldin’s corpse, and the body of 1st Sgt. Oron Shaul, which was also seized, Hamas is demanding a steep ransom to be paid in the release of Palestinian prisoners held by Israel.

Israel has yet to recover from the trauma associated with the Gilad Shalit deal in 2011, in which more than 1,000 terrorists, many of them with blood on their hands, were released in exchange for a single soldier. Under no circumstances will Israel grant legitimacy to the release of terrorists, particularly terrorists with blood on their hands. Israelis certainly would not accept such a deal in exchange for the bodies of dead soldiers. But there is another side to this equation. The Goldin family has been waging a relentless public campaign, calling on the Cabinet not to reach any arrangement with Gaza and not to help Hamas by easing restrictions on the Gaza siege until the bodies are returned. This campaign has stable moral footing and a healthy logic to it. “A humanitarian gesture in exchange for a humanitarian gesture,” say Goldin’s parents, and they are right. There is no reason for Hamas to get involved in horse-trading over the bodies of their boys, especially if Israel’s Supreme Court orders the government to return the corpses of Palestinian terrorists without delay.

Right now, there is not a single leader in Israel who can look the people squarely in the eyes and declare wholeheartedly that the country’s interest in resolving the situation in Gaza takes precedence over its interest in getting a dead soldier’s body back for burial. Prime Minister Benjamin Netanyahu can’t do it. Nor can Defense Minister Avigdor Liberman. Even Chief of Staff Lt. Gen. Gadi Eizenkot can’t do it. And so, as frustrating as it may be, we’re all stuck on square one again.

Given the current situation, after suffering a devastating blow in 2014 and losing its terrorist tunnels (only a few are still left, and Israel’s underground obstacle will be completed next year), Hamas has found its relief in the most negligible, primitive and unexpected form: fire kites. The advanced technology of Israel’s anti-missile system “Iron Dome” and the power of its F-16s and F-35s, its comprehensive intelligence operations, and its absolute control of the land, sea and air are not enough to find a solution to this ancient weapon, which has left the areas surrounding Gaza in flames for the last three months. In the past two weeks, Israel has ramped up its preparations significantly and taken very obvious steps to prepare itself for full-fledged war against Gaza. It hopes that Hamas will get the hint, and in fact, by last weekend, it finally seemed as if Hamas did get the hint. There has been a significant decline in the number of incendiary kites and balloons launched from Gaza and landing in Israeli territory. The problem is that the basic situation has not changed. It is as futile and frustrating as it was before.

“Sinwar is making a very serious strategic mistake,” a very high-ranking source in the IDF told Al-Monitor on condition of anonymity. “He regards the bodies of the dead Israeli soldiers as leverage to win the return of prisoners, instead of seeing the bodies as a tool to improve the miserable lives of 2 million Palestinians who are being held hostage.”

This source claimed, “Hamas knows how far Israel and the international community are willing to go in order to reach an arrangement, yet they still continue to refuse to return the bodies.” He said that this is irrational, illogical behavior that would make no sense to any country with a relatively Western orientation, such as Israel. “The fact that they are prepared to live with four hours of electricity a day, sky-high unemployment, sewage running in the streets, and collapsing water, education and health infrastructures, and yet continue to insist that they will not return the bodies of two Israeli soldiers, is inconceivable,” he admitted.

Among the top command of the IDF, too, the rationale that it is more important to restore quiet to the south for a significant amount of time is more important than insisting on getting the bodies back cannot gain enough traction to overcome moral and ethical values, notably the sacred value of bringing captured soldiers home, or even of bringing their bodies home for burial. It is a daunting Catch-22 situation, and it is here to stay.

The only person who tried to fight against this at the start of his term in the Defense Ministry is current Defense Minister Avigdor Liberman. He gave the impression that Israel has no plans to get trapped again in an endless circle of deals with Hamas over abducted and missing soldiers, as it did in the Shalit deal. Liberman tried to break out of this dead end, but in the end, he was forced to toe the line. He came to recognize the moral intensity of the Goldin and Shaul families’ position.

And so, Israel and Hamas remain locked in their positions as they face off against each other. Each of them has its own sacred principles. For Hamas, the release of prisoners is everything, while Israel is not willing to give up on getting the bodies of its soldiers back, even if it got burned for that in the past. See you next round.