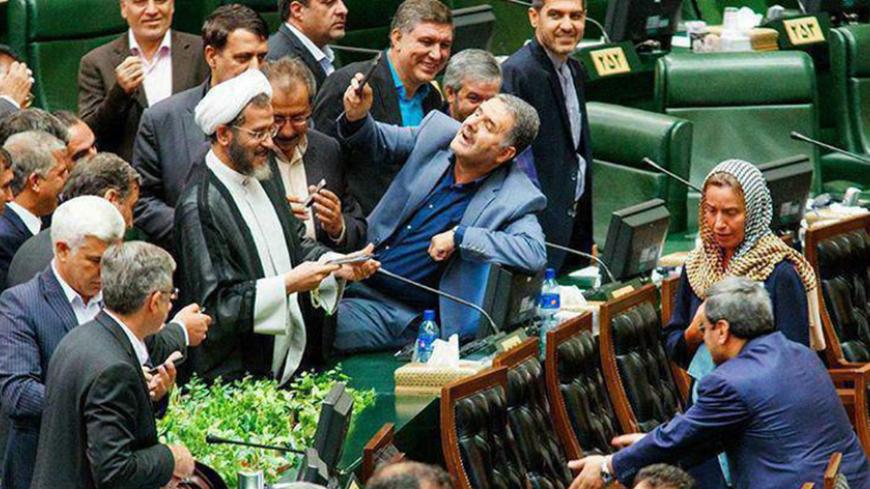 Hassan Rouhani was inaugurated for a second presidential term during an Aug. 5 ceremony at Iran’s parliament. During a 30-minute speech, he spoke of more cooperation with the world. It was a relatively mild speech, with the exception of his vowing to reciprocate against sanctions and his stating that this was the era of the “mother of all negotiations” and not the “mother of all bombs.”

On Iranian social media and in news reports, much of the substance of Rouhani’s speech was overshadowed, however, by events taking place on the sidelines of the inauguration. A number of Reformist parliamentarians from the List of Hope faction enthusiastically lined up to take pictures and selfies with the EU’s top diplomat, Federica Mogherini, who was instrumental in negotiating the nuclear deal between Iran and the six world powers.

Mogherini was seated in the center of the parliament floor, where seats had been placed for hundreds of foreign officials and official guests of the Iranian government. The legislators were physically separated from the guests by the parliament's stadium-like seating and by desks. This arrangement forced a few members of parliament to undertake some uncomfortable physical maneuvering. One parliamentarian, Farajollah Rajabi, had to twist and contort his body, while sitting on the counter and leaning on a screen, to get closer to Mogherini and take a selfie with her in the background. He later apologized.

If the parliamentarians had taken normal pictures, standing alongside Mogherini, the picture session would most likely have passed without controversy. However, given the physical distance and the jovial, highly enthusiastic nature of the members of parliament, who were all laughing and smiling while holding their cellphones, like tourists photographing a celebrity, the scene was bound to cause a stir.

Much of the criticism directed at the Reformist parliamentarians came from conservatives who are critics of the nuclear deal. They tweeted about it with a hashtag that loosely translates to “selfie of humiliation.” Some contrasted the selfie with Mogherini to soldiers on the front line posing with commander of the Quds Force, Qasem Soleimani. Others sarcastically noted that the selfie with Mogherini is the only thing Iran has gotten out of the nuclear deal.

Many Reformist-minded journalists and Twitter users also criticized the selfies, though in a more subdued way. They felt the incident was more of a cultural rather than a political issue. Hesamodin Ashna, an adviser to Rouhani, tweeted, “It is not a political problem, it is a cultural problem.”

Alireza Salimi, a legislator and member of parliament’s supervisory board, said that the behavior of the parliamentarians taking pictures with Mogherini was “contrary to the dignity of a representative” and that the supervisory board would review their actions at their next meeting Aug. 9. In an indirect attack on moderates and Reformists who favor having closer relations with the West, Salimi said that the excitement of the parliamentarians at the prospect of a selfie with Mogherini showed that some politicians “lose themselves in the face of Westerners.” Mohammad Nabi Habibi, secretary-general of the conservative Islamic Coalition Party, criticized the whole affair, saying that while Iranian soldiers are fighting thousands of miles away, their representatives are taking pictures.