The increased attacks against Iranian forces by Iranian Kurdish opposition groups based in Iraq raise questions about the future of relations between Erbil and Tehran. 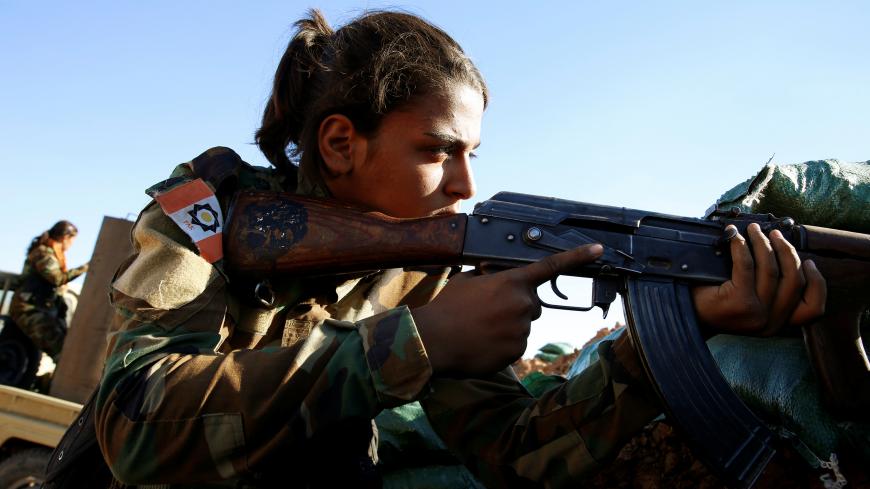 An Iranian-Kurdish female fighter fires her rifle during a fight with Islamic State militants in Bashiqa, near Mosul, Iraq, Nov. 3, 2016. - REUTERS/Ahmed Jadallah

Iranian Kurdish opposition groups based in Iraqi Kurdistan appear to have stepped up their armed activities inside Iran in recent weeks, undermining the Kurdistan Regional Government's (KRG) efforts to promote its upcoming independence referendum as a peaceful development.

Iranian Kurdish fighters based in Iraq have repeatedly crossed the border into Iran and engaged in numerous clashes with Iranian security forces, leading to casualties on both sides. Iran has responded by shelling border areas with heavy artillery, causing huge fires, destroying wildlife and forcing many civilians to flee.

The recent clashes contradict claims by Iraqi Kurdish officials that the Sept. 25 independence referendum will not lead to instability. It also refutes their insistence that Erbil wishes to enjoy cordial relations with its neighbors, including Baghdad, Tehran and Ankara.

Iran has long urged KRG officials to restrain opposition groups that have been based in Iraqi Kurdistan since the early 1990s. Indeed, high-level Iranian delegations have repeatedly met with Iraqi Kurdish officials to convey discontent with the activities of such armed factions.

Nonetheless, the main opposition group Kurdistan Democratic Party of Iran (KDPI) has deployed hundreds of fighters to the Iranian border over the past year and spoken about a new round of fighting. In this vein, its leadership has openly requested foreign assistance to weaken the Iranian state.

"There is an attempt by Western and Arab countries to create obstacles for the unlimited power Iran wields in the region," Hassan Sharafi, the deputy head of KDPI, stated in a lengthy interview with the Rudaw news network on Aug. 10. "Naturally, any pressure on the Islamic Republic to weaken its position in the region … the Iranian opposition and we, as Kurds, could use the opportunity." Sharafi revealed in the same interview that his group will change tactics and increase clandestine activities on the ground inside Iran.

The tension between Iran and armed Kurdish groups in the border area complicates things for Erbil at a time when Iraqi Kurdish officials insist that they want an amicable divorce from Baghdad.

Recent clashes have alarmed Tehran that the Kurds may use foreign assistance from countries such as Saudi Arabia to cause havoc inside Iran. In a rare visit to Turkey earlier this week, the Iranian armed forces' Chief of Staff Maj. Gen. Mohammad Bagheri discussed with senior Turkish military and political figures how to confront Kurdish opposition groups operating in the border areas. Reiterating Iran's disagreement with the KRG's independence referendum, Bagheri warned on Aug. 16 that the plebiscite will usher new tensions and clashes inside Iraq, with negative effects on neighboring countries.

In apparent response, a spokesman for the KRG's peshmerga ministry told Kurdistan24 Aug. 18, "We want to tell all the parties that are speaking about the rights of the people of Kurdistan that it is not their job [to do so] and this is considered a clear interference in the internal affairs of Kurdistan." The spokesman added, "Holding the referendum is a justified and natural right of the Kurdish people, and no one apart from the people of Kurdistan has the right to speak about it."

One of the main policies of the Islamic Republic since its establishment in 1979 has been to fight outside threats using proxy groups. But Tehran is now worried that its adversaries may use the same tactic against it. Iran is presently at loggerheads with Saudi Arabia in Yemen and Syria. Amid this regional contest, it should be noted that the weakest link for Iran is its long border with the Kurdistan Region of Iraq, where thousands of armed members of Iranian Kurdish opposition groups are based.

In a September 2016 interview with the Persian-language service of the BBC, KDPI head Mustafa Hijri revealed that his group has asked many countries for assistance in its fight against the Iranian government.

While Hijri denied receiving any assistance from Israel or Saudi Arabia, his message triggered alarm in Tehran. "What is important for us is to weaken the Islamic Republic and we think foreign assistance could be effective," he said. "We want financial, military, political and propaganda help," Hijri responded when asked what kind of assistance he would accept from foreign powers.

"Kurdistan will be the best neighbor for Iran and Turkey, there is no doubt about that," Najmaldin Karim, the Kurdish governor of disputed Kirkuk province and one of the main champions of the independence referendum, said Aug. 16. "Iran is a special case. … In August 2014, Iran truthfully came to the rescue of Kurdistan [amid the onslaught of Islamic State]. … We should never forget that."

While Iraqi Kurdish officials thank Iran for the support it has offered them over the years and hope to ease Tehran's fears over the planned plebiscite, questions are being raised about why the KRG would allow its territory to be used against Tehran under the current heightened sensitivities. Indeed, perhaps more than ever, such a policy carries risks that may far outweigh whatever leverage it may provide.

"At a time when the Kurdistan region needs the trust of its neighboring countries the most, there is no logic in allowing these groups to launch attacks inside Iran," Mohammad Bakhtyar, an expert on Iran-KRG relations, told Al-Monitor. "Iran could use these clashes to interfere in the referendum and even intervene in the Kurdistan region militarily."