The limits of Egypt's role in the Syria crisis

Egypt's cordial relations with many parties to the Syria conflict has made Cairo an ideal location for recent negotiations, but can Egypt play a larger role in bringing about a resolution? 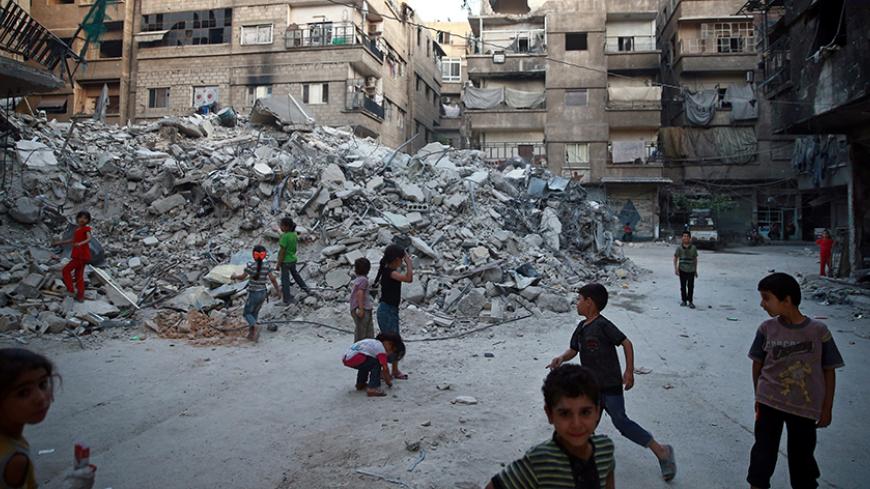 CAIRO — Egypt has recently upped its role in the Syrian crisis, sponsoring a new de-escalation deal in Syria’s Homs on Aug. 2. This came after Egypt succeeded in mediating a cease-fire agreement in Eastern Ghouta after hosting three days of negotiations in Cairo between representatives of some Syrian opposition factions and the Russian Defense Ministry.

As a result of the cease-fire agreement in Eastern Ghouta, signed in Cairo on July 20, the Syrian armed forces general command announced the cessation of hostilities in a number of areas in Rif Dimashq. “The general command said in a statement that the cessation of hostilities enters into effect in a number of areas in the Eastern Ghouta as of July 22,” the Syrian Arab News Agency said.

Mohammad Alloush, the political leader of Jaish al-Islam (Army of Islam) — a large opposition faction backed by Saudi Arabia in Eastern Ghouta — participated in the negotiations. He told the Russian news agency Sputnik on July 22, “It is true; the agreement was reached and now it has come into force.” Alloush said he expected humanitarian aid to be delivered to Ghouta under the agreement.

In an interview with the Portuguese TV channel RTP on Nov. 22, 2016, Egyptian President Abdel Fattah al-Sisi expressed Egypt’s support for the Syrian army in its operations inside Syrian territory and for a political solution of the crisis.

Egypt’s position on the Syrian crisis was confirmed by Cairo's vote on Oct. 7, 2016, in the UN Security Council in favor of a Russian draft resolution on Syria that urged an immediate cessation of hostilities, particularly in Aleppo. The Egyptian position siding with Moscow angered Saudi Arabia.

Ahmed Jarba, the head of the Syrian al-Ghad Movement — a Syrian political opposition faction that participated in the Eastern Ghouta de-escalation agreement — announced at a press conference in Cairo on Aug. 5 that Egypt is brokering a new cease-fire agreement in Homs that was signed July 31. It provides for a cessation of hostilities between the moderate armed opposition and the Syrian regime's forces in the northern Homs countryside, under the sponsorship of the Egyptian government and the guarantee of the Russian Defense Ministry.

The Egyptian brokerage of the Eastern Ghouta and Homs' cease-fire agreements comes after a number of events hosted by Cairo for Syrian opposition factions, most notably the Syrian opposition conference May 3 in parallel with secret and public visits and contacts between the Syrian and Egyptian intelligence services.

The last publicly announced meeting between Egyptian and Syrian security chiefs took place Oct. 18, 2016, when the head of the Syrian National Security Bureau, Maj. Gen. Ali al-Mamlouk, paid an official visit to Cairo upon an invitation from the Egyptian side, accompanied by six Syrian officials. During the visit, Mamlouk met the director of the Egyptian General Intelligence Directorate, Maj. Gen. Khaled Fawzy.

Qasim al-Khatib, a member of the general secretariat of al-Ghad Movement, told Al-Monitor, “Egypt’s role in the Eastern Ghouta de-escalation agreements was limited to hosting negotiations under Russian support between the parties to these agreements on Egyptian territory, without any interference by the Egyptian authorities in the clauses of these agreements or any attempt to impose its vision on the parties involved.”

He added, “The participants in the negotiations for both cease-fire agreements included the representatives of the Egyptian government, the Russian Defense Ministry, Jaish al-Islam and the head of the Syrian al-Ghad movement, Ahmad Jarba.”

He continued, “Moscow is the guarantor of this agreement through the deployment of Russian military police forces in the eastern region of Ghouta and in the city of Homs, to monitor the border crossings and observe abidance of the cease-fire by all factions within this area. Egypt will be sponsoring more than [one] truce agreement within the Syrian regions in the coming days. More than one party in the Syrian crisis wants Egypt to take on this role, except for extremist organizations backed by Qatar, as well as Iran, which seeks military escalation.”

“Egypt did not contribute in drafting the clauses of the Eastern Ghouta agreement and did not enter into the details of the negotiations,” said Tarek Fahmi, a professor of political science at the American University in Cairo.

Fahmi asserted that this requires continuous efforts by Egypt at all levels, which means mending relations with the Syrian regime and coordinating positions with Russia.

In turn, Rabiha Saif Allam, a researcher at the Al-Ahram Center for Political and Strategic Studies, told Al-Monitor, “Since the outbreak of the Syrian crisis, Egypt has never taken radical positions. It rather maintained balanced relations with the moderate Syrian opposition and offered it platforms in the Egyptian capital. At the same time, it maintained contact with the Syrian regime and did not close the Egyptian Embassy in Damascus. This turned Egypt into a perfect choice to host these negotiations.”

Regarding the possible difficulties that may hinder Egypt’s sponsorship of the cease-fire agreement, Saif Allam said, “The Egyptian sponsorship in other areas may be threatened by pro-Turkish Syrian factions such as Ahrar al-Sham, which is active in northern Syria. But the Egyptian sponsorship of the Eastern Ghouta de-escalation agreement was accepted and successful given the close connections between al-Ghad and the main factions in the eastern region, especially in the absence of any control by the regime in this area.”

Allam said Jaish al-Islam, which is backed by Saudi Arabia, took part in these negotiations since it is in a weak position and is no longer the sole power in the eastern region of Ghouta. Allam said that even if Saudi Arabia encouraged the faction to participate in the negotiations, this does not mean that the kingdom has changed its stance on the Syrian crisis.