In a letter to Congress protesting a US travel advisory, an Egyptian parliamentary delegation downplayed the threats to Coptic Christians in the country, comparing the statistics on violence against them to shootings in US cities. 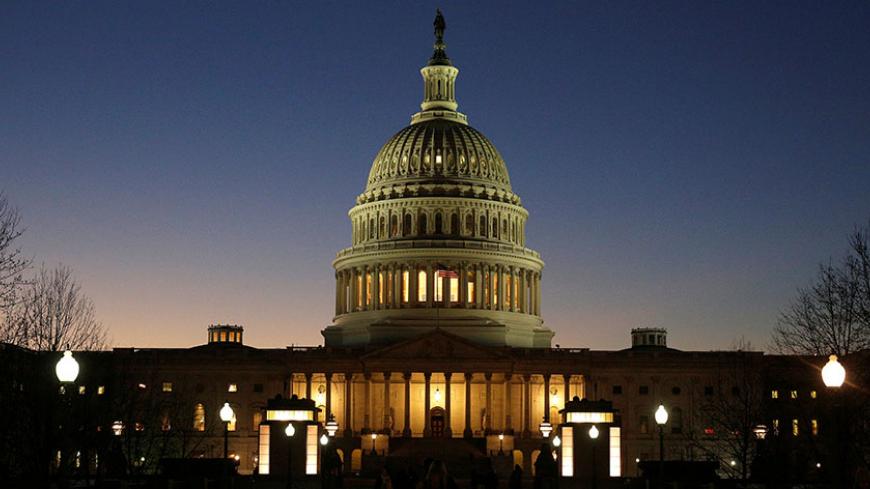 The US Capitol Building is lit at sunset in Washington, Dec. 20, 2016. - REUTERS/Joshua Roberts

An Egyptian delegation’s angry assertion that the death of “less than 100” Christian Copts is “non comparable” to US gun violence is backfiring on Capitol Hill.

In a letter dated July 26, 18 Egyptian lawmakers furious at a recent State Department travel warning insist that “perception is always worse than the truth in this part of the world.” The letter was leaked by a congressional source dismayed by the apparent downplaying of the terrorist threat against religious minorities.

“All it does is irritate Americans enormously,” a former senior State Department official told Al-Monitor. “It’s dumb and all it’s going to do is irritate people and it’ll make [the authors] look sort of stupid in Congress.”

Coptic Solidarity, a watchdog group advocating for the rights of Egyptian Christians, denounced the gun violence comparison as a false equivalency.

“The comparison of terrorist activities in Egypt to gun violence in Baltimore and Chicago is a conflation of entirely different issues and is a fallacious claim,” said Lindsay Griffin, the group’s director of development and advocacy. “The government fails to protect Copts throughout the country and is complicit in the culture of discrimination and impunity that drives increasing numbers of attacks against Copts.”

Griffin went on to denounce the “repeated targeting of houses of worship in Egypt” as the kind of “hate crime” that would trigger an “immediate investigation” by the FBI if it were to occur in the United States.

The letter was spearheaded by Egyptian Foreign Relations Committee member Dalia Youssef, who participated in a delegation to Washington in June. It takes issue with a routine State Department travel advisory dated July 19 that reiterated a previous US warning to American citizens “to consider the risks of travel to Egypt due to threats from terrorist and violent political opposition groups.”

“The US Embassy in Cairo explained that this warning was triggered by the three church bombings that occurred during this year, which led to the unfortunate loss of life of less than 100 Egyptians,” Youssef and her colleagues wrote. “[That death toll] is non comparable to the number of shootings Chicago and Baltimore have witnessed in one year, resulting in approximately 950 Americans dead according to recent statistics of gun violence in 2016.”

Neither Youssef nor the Egyptian Embassy in Washington responded to Al-Monitor’s repeated requests for comment on the letter.

While the July travel advisory cited the general terrorist threat in Egypt, it did single out attacks on Egyptian Copts. Separately, the latest report from the US Commission on International Religious Freedom notes that Egypt continues to struggle with religious discrimination, including a recent uptick in blasphemy cases, while praising President Abdel Fattah al-Sisi for his crackdown on religious incitement.

“Terrorists continue to threaten Egypt’s religious minorities and have attacked sites and people associated with the Egyptian Coptic Church,” read the travel advisory.

According to the Cairo-based daily Egypt Today, Youssef was part of a delegation of 14 parliamentarians led by Foreign Affairs Committee Chairman Ahmed Said. Interestingly, Said and eight other members of his delegations declined to sign Youssef’s letter. The Egyptian daily also reported that the delegation discussed the grievances of Egypt’s repressed Coptic community with their House counterparts.

The former US State Department official also disputed the basis of the letter’s complaint that the State Department issued the travel advisory “with no prior coordination whatsoever with any Egyptian entity nor their counterparts, or with any explanation regarding the reasons that led to it.” The source told Al-Monitor that the United States rarely gives advance notice or coordinates with another country before issuing such an advisory.

“Every single country with a travel warning complains about it. … They’re really for the most inexperienced traveler and I know countries get upset about them because it has a big impact on tourism, but they’re hugely widespread,” the former official said. “I don’t know what [the one for] Mexico says, but I bet it’s worse than Egypt.”

While the State Department refused to comment on the letter’s language regarding terrorist attacks on Egyptian Copts, a current State Department official stressed, “Travel warnings are not indicative of our bilateral relations with a country. They are part of our commitment to protect US citizens traveling and residing abroad.”

The United States was itself beset with an unusually high volume of travel advisories last year, for myriad reasons. USA Today reported that the United Arab Emirates, Bahrain, the United Kingdom, Canada, France, New Zealand, Germany and the Bahamas all urged their citizens to be vigilant when traveling throughout the United States, citing reasons as diverse as anti-Muslim and anti-LGBT violence, mass shootings, police violence and the Zika epidemic.