In a positive sign for US-Turkish ties, US Secretary of State Rex Tillerson held reportedly friendly and lengthy talks with Turkish leaders in Istanbul on the sidelines of a World Petroleum Congress. 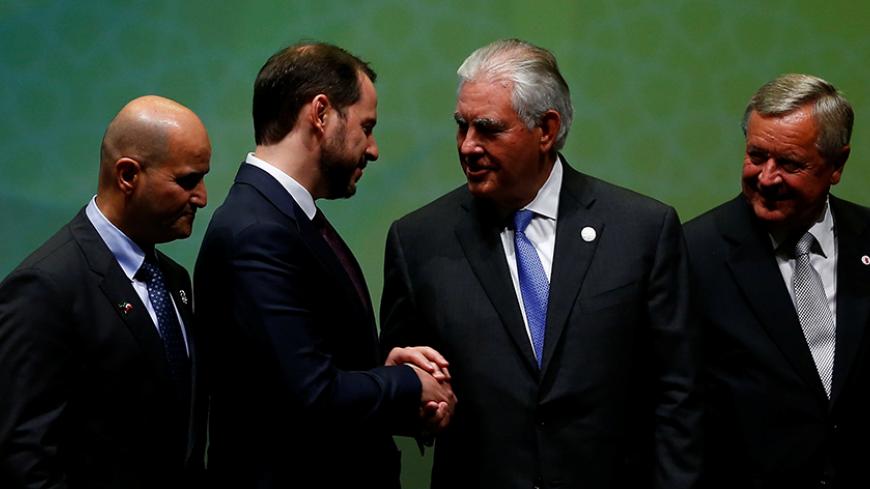 After a prolonged period of sharp tensions between NATO partners Turkey and the United States, there is budding if cautious optimism shared by officials on both sides that frayed relations may be on the mend.

Hopes of a thaw emerged this week when US Secretary of State Rex Tillerson met with Turkish leaders in Istanbul on the sidelines of a World Petroleum Congress, where the former ExxonMobil chairman was awarded a lifetime achievement prize for his career in the energy business.

An American official who briefed Al-Monitor on the meetings said that Cavusoglu and Tillerson spoke for an hour at the Dolmabahce Palace before heading off together to the congress. Tillerson then met with Erdogan at his summer residence in Tarabya.

The official, who spoke on condition of anonymity, said that attendance at both meetings was very limited and that “the atmospherics were slightly more relaxed” than in previous meetings between Tillerson and the Turkish leaders. The talks with Erdogan lasted two hours “longer than either side expected,” the official said.

Tillerson’s chief of staff, Margaret Peterlin, communications adviser R.C. Hammond and US Ambassador to Turkey John Bass accompanied Tillerson on his rendezvous with the Turkish president.

Tillerson made his desire to fix the troubled alliance crystal clear in unprepared remarks delivered during a meet and greet with American diplomats in Istanbul. “This is an extraordinarily important relationship to the United States for many, many reasons that you would well understand, from a security standpoint to future economic opportunities as well … which is why we must put the relationship on the mend.” He acknowledged that trust had been eroded on both sides, saying, “I think we are beginning to rebuild some of that trust that we lost in one another.”

The official briefing Al-Monitor said, “Tillerson would like us to have a fresh, positive, mutually beneficial working relationship based on mutual goals.”

The Donald Trump administration’s overriding foreign policy goal remains to defeat the Islamic State and its decision to continue the previous administration’s policy of partnering with the Syrian Kurdish People’s Protection Units (YPG) against the jihadis in Syria is the main source of friction between the two countries. The YPG is closely affiliated with the Kurdistan Workers Party (PKK), the rebel group that is fighting for Kurdish self-rule inside Turkey. The other big thorn is Washington’s refusal to extradite Fethullah Gulen, the power-hungry Turkish imam who is accused of engineering last summer’s botched coup.

Relations took a nosedive in April when Trump authorized the Pentagon to directly arm the YPG in preparation for the campaign to liberate Raqqa, the so-called capital of the Islamic State.

Subsequent exchanges between Tillerson and Cavusoglu were unusually heated with the secretary of state reportedly telling his Turkish counterpart that Turkey and the United States could go their separate ways.

Tillerson is believed, however, to be firmly opposed to expanding the US campaign beyond Raqqa to Deir ez-Zor, the strategic outpost near the Iraqi border where IS militants fleeing Raqqa are thought to be embedded. In any case, the YPG and its affiliates would likely resist freeing the mainly Arab city from the jihadis without ironclad guarantees that their sacrifices would be rewarded with US recognition of their political status. So far, the United States has turned a deaf ear to Kurdish demands, in part because of the further damage it would inflict on relations with Turkey.

In his comments to US diplomats in Istanbul, Tillerson suggested that differences with Turkey over Syria might be narrowing. “We’re making some progress down in Syria. We are hopeful that we can replicate that with Turkey on some areas in the northern part of Syria … and that will also form a basis for improving the trust, as well.”

Erdogan will have been pleased by what The Washington Post called in a blistering editorial today Tillerson's "dispiriting silence" over Turkey's "blatant assault on dissent."

A Turkish official speaking to Al-Monitor on condition of anonymity reported hearing that “Tillerson wants out after Raqqa,” adding, “If [the United States] don’t go to Deir ez-Zor with the YPG, that would be a nice gesture to Turkey. We scent a desire to reset relations and also a measure of guilt among some administration officials.” The official warned, however, that “many hurdles remain” and expressed deep skepticism over US pledges to reclaim weapons given to the YPG once the war against IS is over.

Much depends on where Secretary of Defense James Mattis stands with regard to the strategy to be charted after Raqqa. The retired general has made hawkish noises about Iran and Turkey’s support would be critical to any effort to further isolate Iran’s clerical regime.

“And when Tillerson and Mattis agree, that generally becomes the policy,” a second US official told Al-Monitor on condition of anonymity.

James F. Jeffrey is a former US ambassador to Turkey and currently a Philip Solondz distinguished fellow at the Washington Institute for Near East Policy. He observed in comments emailed to Al-Monitor, “Once Raqqa is taken the US will have a decision — does it pull out of northern and southern Syria (and Iraq) and thus turn the region (and those who have fought with us) over to, as Erdogan terms it, ‘Persian expansionism’ or do we find a way to stay on and put together a set of no-fly zones to pressure for a compromise political solution to Syria rather than a total victory for Assad?”

Jeffrey went on, “Turkey and its [Euphrates Shield] zone in Syria would be essential to this so the US might be more flexible on the YPG. But then Turkey has to decide whether it wants a YPG ‘monitored’ by the US on its southern border or Assad, Iranians and Hezbollah (who are capable of using the Kurds against Turkey as we have seen Iran do with the PKK).” He concluded, “Big decisions are coming up and the Tillerson visit will help facilitate thinking.”