Turkey's pervasive president may be wearing out his welcome

"Erdoganmania" is evolving into Erdogan fatigue as he exhausts people with his constant interference in their lives. 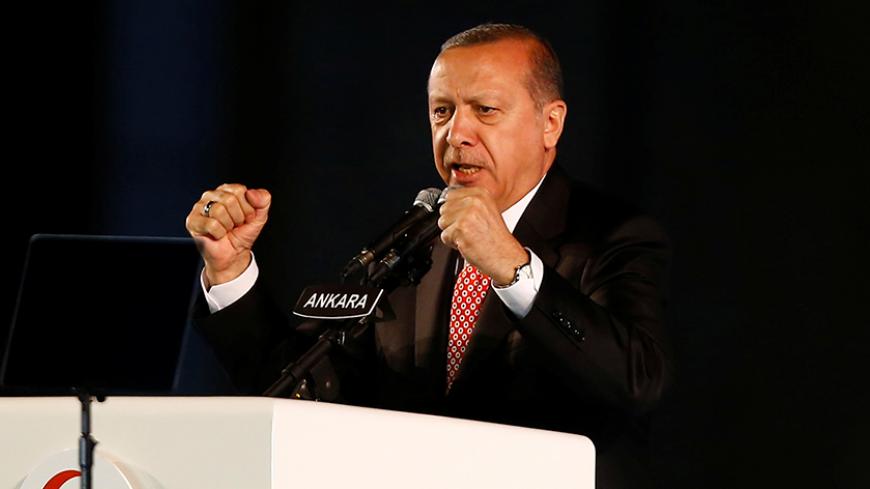 Turkey's President Recep Tayyip Erdogan addresses his supporters during a ceremony marking the first anniversary of the attempted coup in front of the Turkish parliament in Ankara, Turkey, July 16, 2017. - REUTERS/Umit Bektas

Celebrities sometimes suffer the consequences of overexposure, when their audiences turn away, tired of seeing them everywhere. Turkey's ubiquitous president, Recep Tayyip Erdogan, appears to be feeling the effects of something similar: Erdogan fatigue.

Erdogan watches public opinion polls closely. His ruling Justice and Development Party (AKP) routinely employs polling agencies to check the pulse of the nation, particularly those who identify with the party: That's one of the reasons why Erdogan has been able to claim and supposedly sustain his popularity. These polls are usually just for party insiders' eyes. However, in mid-July, Nuray Babacan from the daily newspaper Hurriyet reported that the results of two polls conducted after the April 16 constitutional referendum were leaked to the press.

One of the polls was about AKP voters' choice on the April 16 referendum, which greatly expanded the powers of the presidency. The poll showed that about 4% to 12% of the AKP base voted against the referendum. Also, Erdogan's fear of losing the youth vote was real: Only 35% of the AKP youth voted for the constitutional amendments.

The overall results of the April 16 referendum weren't pleasant for Erdogan, either; his dubious victory came with a significant loss of major cities, including Istanbul, Ankara and Izmir. Out of 30 major cities, 17 voted no. Also, about 60% of first-time voters voted no. The long-dreaded truth has become clear: Erdogan lost the support of urban youth between the ages of 16 and 25.

Even more worrisome for Erdogan is that 76% of the population polled doesn't trust the justice system.

Hence, on May 30, after becoming AKP chairman once again, Erdogan said, "We will review and update all our provincial organizations in the cities, districts and villages because there is a metal fatigue that we need to [overcome]. We have to get ready for the 2019 elections with more dynamic and hardworking teams."

The strongest response to Erdogan's words came from Temel Karamollaoglu, the chairman of the Islamist Felicity Party. Karamollaoglu said changing the cadres of the AKP will be useless as long as the mentality — the fatigued metal — does not change.

Is it fair for one man to claim a victory as his own accomplishment while blaming the loss on the party? Since the end of May, Erdogan has used various opportunities to tell AKP members to be ready for a shakeup. Meanwhile, pro-AKP columnists keep busy explaining ways to overcome this exhaustion.

Yet, is altering the party ranks sufficient to shake off the exhaustion? The Cabinet was shuffled recently, but it didn't cause much excitement. People know well that Cabinet members, the prime minister or senior bureaucrats are only a means to serve Erdogan’s agenda — or as it is commonly referred to in Ankara, the palace's wishes. So, are the party cadres really the problem, or is the entire country feeling Erdogan fatigue?

The phrase "Erdogan fatigue" has been used now and then since he became president in 2014, after serving as prime minister since 2003. It's unlikely that any political leader who serves longer than a decade will have consistently high popularity ratings. It's normal for people to demand new figures in politics.

No one is mentioning potential challengers to Erdogan for the 2019 elections; still, Turks are increasingly exhausted by Erdogan's omnipresence. The AKP's leaked post-referendum polls are one indication. Another came during late-night ceremonies marking the one-year anniversary of the failed coup July 15. Before cellphone users could make calls, they were subjected to a 16-second automated anniversary statement from Erdogan, prompting an outburst by annoyed social media users. As emergency law becomes the new normal in Turkey, with arbitrary acts by law enforcement and courts, people are growing weary.

Plus, political snitching is encouraged and surveillance of ordinary people is becoming common in Turkey. For example, the AKP's Istanbul metropolitan municipality will start a program that requires all taxis to have audio and visual recordings of passengers. As public discontent increases, so does the surveillance.

When faced with criticism, Erdogan is not known to avoid confrontation. To the contrary, his popularity once thrived on displays of angry outbursts and macho tantrums. Yet, the returns on Erdogan's anger are diminishing. So another reason for Erdogan fatigue is the high cost Turks have accrued due to unsuccessful policies. This is most visible on the international front, where hiding facts may not be so easy for the AKP government.

For example, the EU Parliament has voted to suspend Turkey's accession talks. Germany and Greece are only a few of the countries that refuse to extradite Turkish soldiers and other alleged coup participants. Even though Turkey is a fellow NATO member, Germany is not only relocating its troops from Incirlik Air Base to Jordan; it just warned its citizens against traveling and investing in Turkey. After Turkey suffered sanctions for shooting down a Russian jet, Erdogan took numerous measures to make amends, but he still hasn't even managed to get Moscow's permission to resume tomato exports to Russia. The financial and human cost of Turkish involvement in Syria is still unknown. Despite all promises about drying mother's tears, Erdogan has failed to provide a sustainable peace with the Kurds. Plus, he wasn't able to convince the United States to stop providing military aid to the Kurdish People's Protection Units in Syria.

There is no credible data to compile a complete picture of Turkish gains and losses. But given that Turkey ranks sixth in the world in number of diplomatic missions abroad, Turkish foreign policy has not been able to deliver most of its stated goals. To the contrary, just the above-mentioned few facts cost various segments of Turkish society dearly, from farming to hospitality industries. As Turkey's credibility in the international realm melts like ice cubes in the desert, Turks find it rather difficult to blame anyone but Erdogan.

As for domestic politics, just looking at the wild and generous promises Erdogan made before the April 16 referendum is sufficient to see how big the disappointment must be for those who supported him. Erdogan promised the world to his voters if the referendum passed. Now, however, with a razor-thin and contested victory, the only promise is an intra-party shakeup.

A seasoned pro-AKP communications scholar told Al-Monitor, "Backbiting has reached its peak in AKP ranks after the July 15 coup. Loyalty to Erdogan is the foremost important criteria for survival." Some people are very unhappy "despite cushy jobs in government."

The scholar added, "However, they cannot leave. Any resignation or firing right now means you are marked as a Gulen movement supporter [and therefore part of the coup attempt]. No one can afford that. Yet, 'yes men' do not help produce sound policies. They are only good to generate save-the-day sound bites. This leads to an extremely lonely Erdogan, without access to wise guidance or opportunity to see his errors."

Given all his fears, we can only expect Erdogan to keep increasing the pressure on any critic, domestic or international.

Erdogan gained and sustained his popularity to an extent by projecting the image of an underdog. He has situated himself and his Islamist movement as victims of a staunchly secularist system. Yet, this routine has been wearing thin for quite some time. Erdogan has proved that he can flip-flop on his promises and most endearing commitments — as he did with Israel over the Gaza flotilla dispute. Abuse of state power as well as increasing nepotism are only a few of the mounting problems adding to Erdogan fatigue.

Most people in Turkey are tired of listening to Erdogan's undeliverable promises and angry rhetoric. Yet, when you turn off the television or the internet, he appears on your phone at midnight. The fatigue cycle continues.