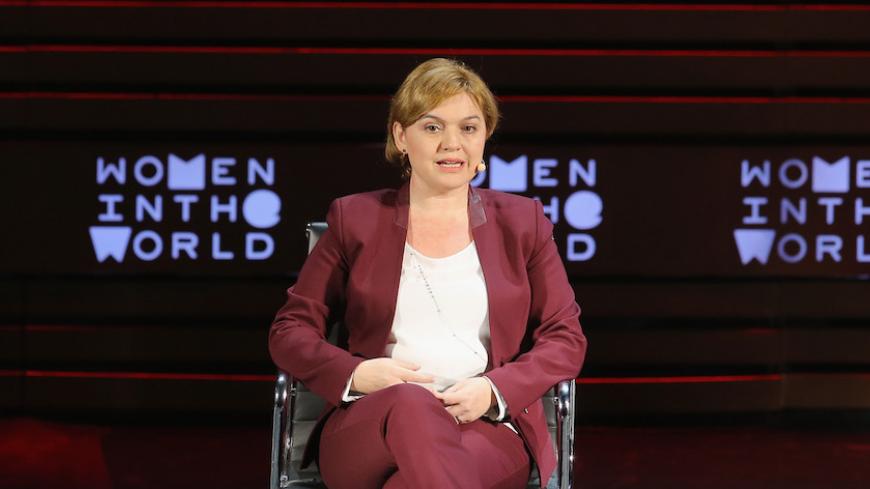 In the wake of Turkey’s historic April 16 referendum, the main opposition Republican People’s Party (CHP) is facing a shakeup. The CHP’s rising star, US-educated economist Selin Sayek Boke, resigned from her positions as deputy chair and party spokesperson May 6.

Boke’s resignation announcement, shared on Twitter, read, “On April 16, at least 50% of Turkey’s voters opposed the one-man regime but their will was usurped through non-legal means,” referring to fraud allegations in the referendum. Without naming CHP chairman Kemal Kilicdaroglu, Boke criticized the party’s inability to formulate an effective response to the impending new political regime in Turkey and added, “The prevalent attitude in the CHP administration, instead of strengthening the voice of the millions coalescing around democracy, has acted in a manner that casts doubt on democracy within the party.”

Joining the CHP in 2014, Boke offered a fresh face and voice to Turkey’s male-dominated political environment. Her academic work on foreign investment, growth-promotion strategies, productivity and labor markets was a major plus for the CHP, which often appears unable to challenge the allegedly market-friendly policies of the ruling Justice and Development Party (AKP).

As a politician, Boke has shown courage under fire. In February 2016, the pro-AKP newspaper Bugun found out that Boke’s father, the prestigious physician Iskender Sayek, is an Arab Christian from Hatay province, and that Boke may have been baptized as a baby. As Al-Monitor’s Pinar Tremblay observed at the time, Boke’s response was measured, cool-headed and embracing of Turkey’s diverse social fabric.

So how could this high-profile resignation affect Turkey’s second largest party?

Aykan Erdemir, a senior fellow at the Foundation for Defense of Democracies in Washington and a former CHP member of parliament, told Al-Monitor in an email exchange, “While some in the opposition camp would like to focus their efforts on preparing for the November 2019 presidential elections, Boke and many others insist on challenging the referendum results and the ensuing legitimacy crisis.”

Erdemir pointed out that Boke’s attacks against the AKP over the fraud rumors have already rattled the ruling party and its supporters. “Boke was accused by the pro-government media to have resigned after meeting with the US ambassador in Ankara, as part of an American conspiracy. Such smear campaigns show that the issue of legitimacy deficit continues to be a highly sensitive matter for Erdogan.” He added, “If Boke can connect with Turkey's naysaying half to raise the illegitimacy of the referendum and the presidential system, this could become the Achilles heel for Erdogan.”

Other members of the secular opposition beg to differ. One CHP member who has been active in get-out-the-vote efforts in Turkey and overseas told Al-Monitor on condition of anonymity that he did not find Boke’s resignation and her veiled criticism of Kilicdaroglu “sincere.” “On the issue of internal party democracy, Boke voted in favor of referring the case of Fikri Saglar [who criticized Kilicdaroglu for being indecisive and for ruling the party in an absolutist fashion] to the CHP’s disciplinary organs. She then announced the party central committee’s decision [on Saglar] on May 3. She could’ve refused to vote; she could’ve expressed her disapproval.“

The CHP activist, like Erdemir, thinks the real fight lies ahead: “As the ‘no’ camp [in the referendum], we are looking for ways to restart our struggle. We don’t have time to waste.”

But perhaps the bigger question is whether Boke will challenge Kilicdaroglu for party leadership. Her chances of defeating Kilicdaroglu in the party congress appear marginal right now. But if (and these are big ifs) the far-right Nationalist Action Party decides to get rid of its own ineffective chairman, Devlet Bahceli, and replace him with charismatic history professor Meral Aksener, Erdogan could end up facing two women academics in the 2019 elections.