No time for rest as Turkey's Justice March reaches Istanbul

The Turkish opposition's Justice March has ended in a triumphant rally of over a million people, but can Kilicdaroglu leverage the march into a coalition broad enough to challenge the Justice and Development Party in the 2019 elections? 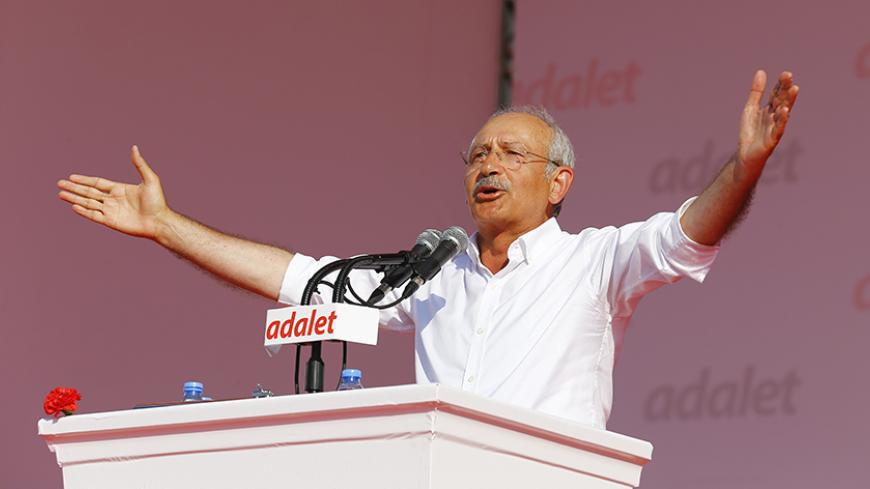 Turkey’s Justice March, led by the main opposition leader Kemal Kilicdaroglu, crescendoed on its 25th day in the Istanbul suburb of Maltepe with a mass rally that drew well over a million people protesting authoritarian rule in the country.

In his address to the crowds assembled at the Sea of Marmara, where his nemesis, Turkish President Recep Tayyip Erdogan, has stumped many times, Kilicdaroglu called his grueling 432-kilometer march from the capital, Ankara, “our first step” and a “rebirth.”

Though the 69-year-old leader of the secular Republican People’s Party (CHP) lacks Erdogan’s oratory skills and charisma, he drew wild cheers as he took aim at Erdogan and the climate of repression that has sharply intensified since last summer’s coup attempt. Kilicdaroglu read out a 10-point manifesto demanding, among other things, that the state of emergency declared after the coup be lifted, that judicial independence be restored and that some 150 journalists and over a dozen members of parliament be freed.

“How lovely it is to stand shoulder to shoulder again … to say ‘enough.’” wrote Aydin Selcen, a former Turkish diplomat in his column for the independent online news portal Duvar. "Kilicdaroglu … reminded us that we are not guests in this country but its owners."

Aykan Erdemir, a former CHP lawmaker and now senior fellow at the Foundation for Defense of Democracies, told Al-Monitor, “Erdogan’s single-man rule birthed the Justice March.” He went on, “This was a learning process for the CHP. It has discovered that by tapping into the nation’s thirst for justice it can bring together different constituents.”

Even the Western media, which habitually treats Kilicdaroglu with a mix of scorn and indifference, was jolted into action with a flurry of articles appearing in The New York Times and other prominent outlets during the last days of his trek. “It seems like the secular opposition has now gotten the full backing that the Western media gives to whoever they identify as the democratic underdog,” observed Nicholas Danforth, a Turkey scholar at the Bipartisan Policy Center, in an interview.

But amid all the euphoria, many are already asking what will come next. Can Kilicdaroglu leverage the march into a coalition broad enough to pose a meaningful challenge to Erdogan and his Justice and Development Party? The question is gaining urgency as presidential and parliamentary elections due to be held concurrently in November 2019 edge nearer. Danforth cautioned, “If this [march] focuses Western attention on the fact that the battle for democracy in Turkey isn’t over, it distracts from the more frightening possibility that if the battle is lost, it could easily end in chaos and violence.”

The executive presidential system that was narrowly approved in a controversy-tainted referendum in April will kick in after that election, effectively leaving the country with single-man rule. Between now and then, the opposition needs to come up with a strategy to prevent Erdogan from further cementing his grip. The plan would necessarily entail agreeing on a presidential candidate who can draw enough votes to force a second round of balloting and go on to defeat Erdogan. Many question whether Kilicdaroglu, who insists that he won’t run, is up to the task.

And Erdogan himself, who predictably dismissed the marchers as allies of the coup plotters, could easily burst the balloon.

In an analyis shared with clients, Wolfang Piccoli of the risk consultancy Teneo Intelligence, noted, 'The first anniversary of last year’s coup attempt [on July 15] provides Erdogan with a great opportunity to 'bury' the March for Justice, as the country will soon embark on a week-long commemoration that will feature multiple events across the country." The commemoration will run July 11-16.

From the outset, Kilicdaroglu kept his march determinedly above party politics, framing it as a national quest for justice as the government continues to prosecute and jail tens of thousands of civil servants, academics, politicians and others accused of links to Islamic cleric Fethullah Gulen, the alleged mastermind of the coup, or to the outlawed Kurdistan Workers Party (PKK), which is fighting for Kurdish self-rule inside Turkey and beyond.

Last week, the government provoked a further outcry when it detained eight prominent human rights defenders, among them Amnesty International’s Turkey director Idil Eser and two international trainers as they were conducting a workshop in Istanbul’s Princes’ Islands. Today, police detained 72 people including prominent academics in separate raids on the prestigious Bosporus and Medeniyet universities.

While Kilicdaroglu’s nonpartisan approach, shedding his party’s firm secularism and reaching out to pious Muslims, is proving successful in the short term, it may not be sustainable. The Kurds, who are Turkey’s fastest growing demographic, felt affronted that he did not utter the word “Kurd” a single time or mention their imprisoned leader, Selahattin Demirtas, by name. Many recall that Kilicdaroglu gave his party free rein to vote in favor of an amendment that lifted parliamentary immunity for deputies facing prosecution, thus clearing the path for Demirtas’ incarceration and that of 11 other lawmakers from his People’s Democratic Party (HDP).

Meanwhile, from pulling down signposts in the Kurdish language, removing statues of Kurdish notables and shuttering Kurdish-language newspapers to proposing to criminalize the word “Kurdistan,” the government’s assault on the Kurdish identity is unremitting. Kilicdaroglu has not made a peep. The result, said Ramazan Tunc, an adviser to the Democratic Regions Party, an HDP affiliate, is that many Kurds, especially younger ones, “couldn’t care less about Kilicdaroglu’s march.” Tunc told Al-Monitor, “Nobody dares say so but the truth is that the Kurds, especially the younger generation, are emotionally divorced from Turkey.”

Tunc argued that such feelings have been sharpened by the success of the Syrian Kurds, who in partnership with the United States have steadily expanded their control over a broad swath of territory along the Turkish border. “There are many Kurds from the north [Turkey] who are helping run their administration. While an independent Kurdistan in Iraq would be viewed by [Turkey’s] Kurds as a gain, Kurdish autonomy or federalism in Syria would be celebrated with joy and excitement,” he said.

HDP lawmaker Hishyar Ozsoy agrees that Kilicdaroglu ought to have mustered the courage to speak up for the Kurds. “Leaders need to take risks,” he told Al-Monitor. Ozsoy nonetheless acknowledged the difficulties of reaching out to the Kurds without alienating the CHP’s traditional base and assorted nationalists whose support is key to forging an effective alternative to Erdogan. That’s been the CHP leader’s conundrum all along. And the resumption of the war between the army and the PKK in 2015 has hardened public opinion with plenty of encouragement from Erdogan.

Even so, many Kurds believe that Kilicdaroglu’s background should make him more empathetic to their suffering. He is an Alevi and hails from Dersim, where with the apparent blessings of Kemal Ataturk, the founder of modern Turkey and the CHP, the Turkish air force rained bombs on local civilians during their 1938 rebellion against central rule. Kilicdaroglu lost 80 relatives in the massacres and though he says he is descended of Turkmen stock, he may well be partly Kurdish. His engagingly frank wife Sevim, who is also from Dersim, freely admits that her mother tongue is the Zaza dialect of Kurdish and that she learned Turkish later.

Kilicdaroglu could have spent much of his career as a civil servant, rising to become the head of the country’s social security service, downplaying his Alevi identity. Yet, even as he appeared to be the model Turkish bureaucrat, Kilicdaroglu was collecting an impressive archive on the Dersim massacres on the side. This other, quietly defiant persona may well have propelled Kilicdaroglu into action, giving millions of Turkish citizens hope, if only fleetingly. That sentiment was poignantly summed up by a woman called Tulin Aydin in a tweet: “Dear foreign Turkey observers, stop discussing what will come next after #justice meeting & give us a minute of joy and freedom. Thanks.”