A newspaper's revelation about the Christian heritage of an opposition parliamentarian has created another rift in the ruling AKP and opened a dialogue on interfaith marriage. 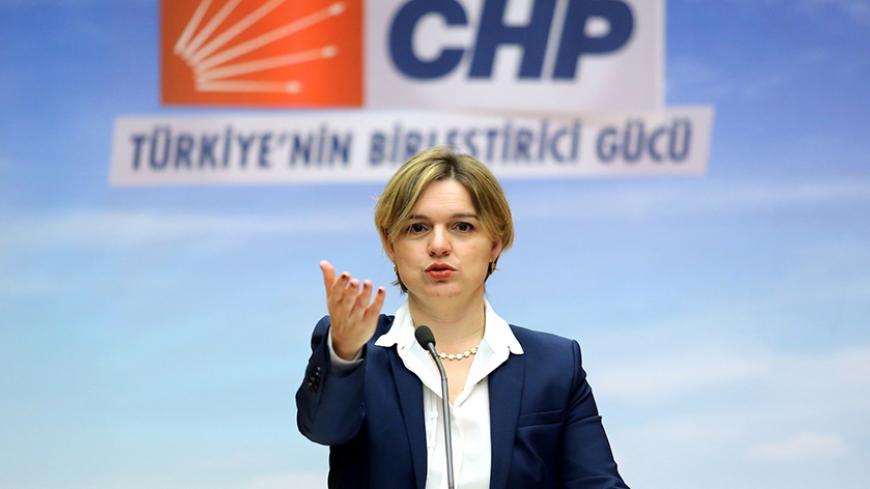 The Feb. 9 headline in the pro-government daily Bugun proclaimed, “CHP spokesperson Boke has been baptized.” The newspaper claimed that the Republican People’s Party, the main opposition, was facing a crisis over the religious identity of its public voice, Selin Sayek Boke. The report detailed Boke’s family's roots, revealing that her father was from Hatay province and an Orthodox Christian.

Boke is a young, US-educated former economics professor. Having left a successful academic career, she joined the CHP and is considered a rising star in the party. Boke had recently emerged as the fiercest critic of the government, in particular of Turkish President Recep Tayyip Erdogan. On Feb. 3, Boke went on the record criticizing Erdogan’s insistence on Turkey switching to a presidential system of government. “Contrary to [Justice and Development Party] statements, Turkey does not have a political regime problem. Rather, President Erdogan has a personal problem, to become the one-man [rule],” Boke remarked. It is not surprising that Boke’s tough criticism, coupled with her perfect resume, could only be tarnished through ad hominem attacks.

The Bugun report caused quite a stir. Most initial reactions came from members of the opposition, whose basic response was, so what if she's a Christian? A day after the Bugun story appeared, Boke held a press conference and said the following:

"Today my family and I have been targets of a hate crime. We are not the first and not the only ones. … I will make this statement once and for all. And let me be clear, as a citizen of the Turkish republic, in this day and age, I am ashamed to make a statement against such a hate crime. I am ashamed not as Selin Sayek Boke. I am ashamed as a proud citizen of Turkey. … There is nothing for me to hide or be concerned about regarding my family history. Those who thought I have something to hide about my family — therefore, committing a hate crime — should be the ones who are ashamed. My family has been living in these lands for centuries. They belong to this country as much as anyone else and have dedicated their lives to serving this country. Now, for those interested in family ancestry, let me curb their curiosity: A part of my family is Christian, while the other part is Muslim."

Despite the audio record of Boke's statement and its availability on YouTube, Bugun and other pro-government media outlets ran preposterous headlines misrepresenting her words. For example, Yeni Akit reported Boke as saying, “I am proud of my Christian identity and ashamed of being a Turkish citizen.” Several social media trolls lashed out, telling Boke to leave the country and saying that they were ashamed of her. Several Twitter users posted an inaccurate Boke family tree.

During the first days of the attacks against Boke, Selahattin Demirtas, chairman of the pro-Kurdish Peoples' Democratic Party, was the highest-profile politician to stand in solidarity with her. “How can they question someone’s identity? What if someone is a Christian? This is the Islamic State’s mentality,” Demirtas said.

Hurriyet columnist Ahmet Hakan wrote a searing column under the title “Why are you silent, Mr. Etyen and Mr. Markar?” Etyen Mahcupyan is a former senior adviser to Erdogan and Markar Esayan is a Justice and Development Party (AKP) parliamentarian. Both are Christians. Hakan harshly criticized Bugun’s reporting. Other commentators joined in, questioning how the AKP, which came to power by championing religious rights and liberties, had become a party of such intolerance.

As pressure built, on Feb. 15 Turkish Prime Minister Ahmet Davutoglu said to the press, “To question someone’s identity and generate a debate out of it is against human rights.” Davutoglu also expressed his agreement with Boke’s statement. The next day, Justice Minister Bekir Bozdag condemned Bugun’s reporting, and Melih Gokcek, an important AKP figure and the colorful mayor of Ankara, tweeted about Yeni Akit’s manipulation of Boke's words and encouraged Boke to be proud of her Christian identity. Ironically, the Boke issue has created another rift in an already divided AKP.

It is important to see prominent names in the AKP come forward to criticize such a hateful attack, but the event highlights two ongoing issues. One is that slander by pro-government media in Turkey is the new normal, for which there is little or no legal recourse. The other is the seldom mentioned hardship of interfaith marriages. These so-called hybrid, or mixed, marriages are neither new nor rare in Anatolia, but they are almost always kept quiet.

“I married a Turkish Jew and was happy and excited to learn about Judaism,” a young Muslim woman raised in a secular family requesting anonymity told Al-Monitor. “We were in New York during Hanukkah. I saw menorahs in windows and suggested to my husband that we should do the same next year at home. He said, ‘Don’t you dare do that. We do not want people to be reminded of my religion.’ This was the first of many moments where I learned how strong anti-Semitism is in Turkey and also how being an interfaith couple could mean you will face challenges from members of both families and faiths.”

Erdal Dogan, a human rights attorney, is married to Selina Dogan, a Turkish Armenian CHP parliamentarian. Dogan was open about observations gleaned from being in an interfaith marriage. “Turkish society applauds the interfaith couple as long as it is no longer interfaith,” he told Al-Monitor. “That is, if the non-Muslim partner converts to Islam, then there is respect for the couple. If not, the validity of the marriage is questioned.”

Dogan said that even well-intentioned friends can sometimes utter offensive statements. “For example, sometimes people will comment, ‘Her religion is irrelevant as long as she is a good human,’ or ‘Oh well, she is human as well,’” he said.

Non-Muslims in Turkey face different layers of discrimination and challenges while constantly trying to “prove” they are Turks. Those in mixed marriages or children of interfaith couples face the confusion of not knowing how to respond when questioned about their religious identity or family tree. Keeping quiet often seems like the best solution, although that might not be the case. The attack on Boke, as horrible as it was, has actually provided an opportunity for a dialogue about the different religious and ethnic identities in Turkey.