An unprecedented number of minority candidates will run in Turkey’s June 7 general elections, promising representation for ethnic and religious communities after decades of parliamentary absence. 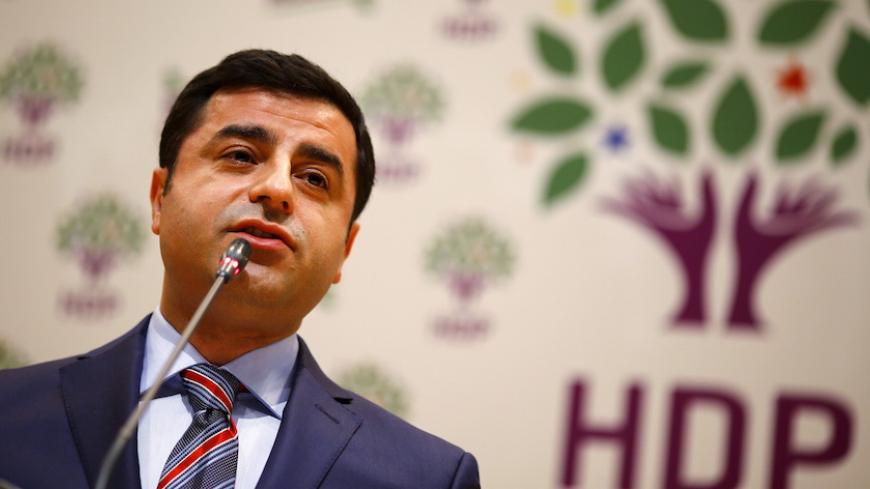 Selahattin Demirtas, co-chairman of the pro-Kurdish People's Democracy Party, addresses his party members as he starts his campaign for Turkey's June 7 parliamentary elections, during a meeting in Ankara, April 10, 2015. - REUTERS/Umit Bektas

Turkey’s political parties announced their ambitious candidate lists this week for the June 7 general elections, which will deliver a fateful verdict on President Recep Tayyip Erdogan’s ambitions to install a presidential system. In a remarkable development, the parties have opened up to minority groups, which have been largely sidelined from politics, excluding the early years of the modern republic. Members of the Greek, Armenian, Yazidi and Roma communities have been given favorable spots on the slates, raising the prospect of strong minority representation in the next parliament.

The pro-Kurdish People's Democracy Party (HDP), on a quest to become a nationwide party appealing to voters beyond its traditional Kurdish base, has fielded three Armenian candidates — Garo (Karabet) Paylan, Murad Mihci and Filor Uluk Benli — in addition to two Yazidis, Ali Atalan and Feleknaz Uca, and the Syriac Erol Dora. The list of the ruling Justice and Development Party (AKP) features Armenian journalist Markar Esayan.

The biggest surprise came from the main opposition Republican People’s Party (CHP), where an in-house struggle is underway between neonationalist and reformist wings. The party fielded ethnic Armenian lawyer Selina Ozuzun Dogan as its top candidate in Istanbul’s 2nd district, a move that sparked controversy within the CHP, where the camp denying the Armenian genocide holds the upper hand. CHP Chairman Kemal Kilicdaroglu reportedly had to make a choice between Dogan and Goksel Gulbey, head of the Association for Struggle Against False Armenian Claims, which has been at the forefront of genocide denial campaigns. Convinced that fielding both would be a contradiction, the CHP leader favored Dogan over Gulbey, who had applied to run in the eastern province of Igdir.

Dogan was immediately questioned whether she would bring up the “Armenian allegations” in parliament. In remarks to Al Jazeera Turk, she said she disliked the question, stressing that Turkey’s democratization was her first priority. Some in the party called on Dogan to withdraw her candidacy, while neonationalist circles slammed the CHP, saying that Ataturk’s party had fielded a candidate promoting the Armenian allegations. The daily Aydinlik, for instance, ran a story headlined, “The CHP’s centenary present to the [Armenian] diaspora,” evoking this year’s 100th anniversary of the Armenian massacres. Referring to Dogan’s husband, a well-known lawyer, the newspaper wrote that “the CHP fielded the wife of Erdal Dogan, who had branded the Turkish Republic a genocide perpetrator.”

Erosion through the years

The election of these Armenian candidates would mark an Armenian comeback in parliament after a 51-year absence. The last Armenian to hold a parliamentary seat was Berc Sahak Turan, who served in the now defunct Republican Senate from 1961 to 1964.

In total, only 24 representatives of non-Muslim minorities have held parliamentary seats in Turkey’s republican history. The first was Berc Keresteciyan, an Armenian who entered parliament in 1935 on Ataturk’s non-Muslim contingent. Besides Keresteciyan, who was re-elected twice, two Greeks, two Jews and an Orthodox Turk served in parliament during the CHP’s 27-year single-party rule, when no other party could contest the elections.

In the 1946 polls, which marked the beginning of the multiparty system, Nikola Fakacelli and Vasil Konos, both from the Greek Orthodox community, became parliament members on the CHP ticket. From 1950 to 1960, when the Democrat Party ruled Turkey, four Jews, three Greeks and three Armenians served in the legislature. The Founding Assembly created after the military coup of May 27, 1960, included Erol Dilek, Kaludi Laskari and Hermine Agavni Kalustyan as representatives of, respectively, the Jewish, Greek and Armenian minorities. Kalustyan was also the republic’s first non-Muslim minority woman to serve in parliament.

Vying for the Alevi vote

The election campaign has also produced surprises with respect to Muslim ethnic minorities. In an unprecedented move, the CHP fielded a Roma candidate, Ozcan Purcu, in the western province of Izmir, sparking excitement among one of Turkey’s most ostracized communities. Running against Purcu will be the AKP’s Cemal Bekle, who is also of Roma origin. The HDP, for its part, fielded a Roma candidate, Sedat Zimba, in the northwestern province of Edirne.

A remarkable CHP-HDP competition is also underway for the vote of the Alevi community, which the AKP government has seriously alienated and ostracized since the outbreak of the Syrian war. Both parties’ tickets feature prominent Alevis. The HDP’s list includes Turgut Oker, the head of the Confederation of European Alevi Unions; Ali Kenanoglu, chairman of the Hubyar Sultan Alevi Culture Association; and Muslum Dogan, head of the Pir Sultan Abdal Culture Association. On the CHP ticket, meanwhile, Alevi figures such as Elif Dogan Turkmen, Necati Yilmaz, Ali Haydar Hakverdi, Tufan Kose and Veli Agbaba are in spots that more or less guarantee their election.

The AKP, on the other hand, lacks any noticeable Alevi candidate, well aware it can no longer lure Alevi support after the 2013 Gezi Park protests, which saw a number of Alevi demonstrators killed. The Nationalist Action Party similarly lacks Alevi candidates.

Turkey’s next parliament is likely to be more pluralist than its predecessors, with members of ethnic and religious minorities standing a strong chance of clinching seats. But a question as important as their representation is whether they will be able to work free of pressure, without suppressing their diverse identities.

Turkey’s uniformist culture still dictates that “you can enter parliament as an Armenian, but you can’t bring up the genocide allegations.” The Alevis face a similar pressure, as reflected in the touching farewell speech of Ibrahim Yigit, the Alevi religious figure who is completing a second term as an AKP lawmaker. “I’m leaving parliament, having failed to get the cemevis recognized,” he said this week, referring to the Alevi houses of worship that are not officially acknowledged as such. “All Alevi openings [of the AKP] got snagged at a certain point.”

What’s the point of parliamentary representation for ethnic and religious minority members if they fail to raise and resolve the problems of their communities? The country’s near history has seen even the expulsion of elected Kurds from parliament. Turkey will make a real progress only when Armenians, Greeks, Syriacs, Yazidis and Roma have a free rostrum to raise their demands, without getting booed.