Demirtas looks beyond the 'Kurdish vote'

In seeking to unite the underrepresented on Turkey's left, Selahattin Demirtas, presidential candidate of the pro-Kurdish People’s Democracy Party, is leading a grassroots movement similar to that of Islamists in the 1990s. 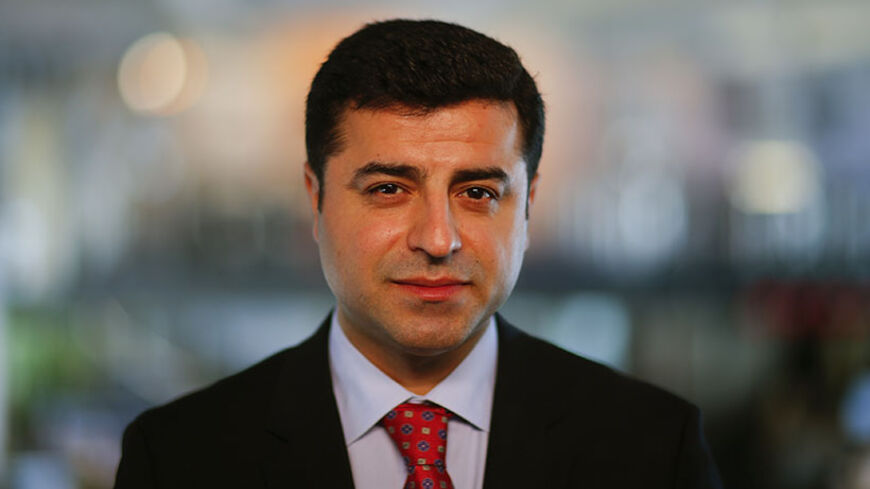 Selahattin Demirtas, named the presidential candidate for the pro-Kurdish People's Democracy Party on June 30, answers a question during an interview in Berlin, April 15, 2013. - REUTERS/Pawel Kopczynski

ANKARA, Turkey — On June 30 in the conference room of a small hotel in Ankara's Kucukesat district, the pro-Kurdish People's Democracy Party (HDP) officially nominated Selahattin Demirtas as its presidential candidate for elections scheduled for Aug. 10.

An elderly woman from the audience who introduced herself as Ayse Sari said she and her husband had traveled from the southeastern city of Mardin because they believe Demirtas to be a pious Muslim. She told Al-Monitor, “We had voted for the AKP [Justice and Development Party] for the last couple of elections, but then Demirtas and his colleagues came to our town and spoke with us. In particular, the women were from our own mindset. They listened to us. Now I will vote for Demirtas for president.”

In his speech before the small, yet diverse, audience, Demirtas emphasized not only how much he cares about women voters, but also how the HDP is the party of women, and how in the presidential race he feels incomplete without his female co-chair beside him. The HDP and its sister organization, the Peace and Democracy Party (BDP), had decided that each seat they sought in municipal races would involve a co-chair arrangement — each position contested jointly by one man and one woman. Such an arrangement is not, however, possible for the presidential race.

More than half those in attendance were women, a rare sight in Turkey's political scene. The women, young and old, with and without headscarves, clapped enthusiastically for Demirtas. As Sari commented with passion, “This is beyond the presidential race.”

Haltice Altinisik, HDP deputy chairwoman responsible for “people and their beliefs,” told Al-Monitor, “Women are not a 'color supplement' to our party, but an equal part of it. Women want a 50% quota in the party, their (percentage) in the society.”

When I expressed admiration for Kurdish women’s strong political participation through the HDP and the BDP, Altinisik gently corrected me. She said, “Please remember — even if we are perceived as a pro-Kurdish party, look around here. We are also pro-women, pro-Alevi, pro-Christian, pro-Muslim and pro-peace. When you listen to Demirtas, I believe you hear he is also in support of the working class, the oppressed. So being a Kurd is just one of the identities around you. We aim to unite the left in Turkey. Many unsatisfied CHP [Republican People's Party] voters will have a voice now.”

The hall, indeed, resembled a microcosm of Turkey's minorities. Absent one woman’s headscarf of yellow, red and green — the colors associated with Kurdistan — it would have been difficult to make any connection to the Kurdish movement.

Although Demirtas hails from the Kurdish movement, the BDP has embarked on a political journey to embrace all underrepresented groups in Turkey. Its logo combines all their symbols. Demirtas, at 41, is the face of a new generation of Kurds who have not spent decades in prison and looks beyond the issues of the southeast. His is not an easy position in a country that still struggles to utter the word “Kurdistan.” In addition, Demirtas’ candidacy is not merely symbolic, as his name on the ballot turns the contest into a three-way race and will significantly influence the first-round results.

Given that most of the Alevi establishment has expressed its disapproval of Ekmeleddin Ihsanoglu, the joint candidate of the CHP and the Nationalist Action Party (MHP), there is serious concern that many leftist voters are not yet sold on him.

On June 30, Ali Kenanoglu, head of the Hubyar Sultan Alevi Culture Association, told Al-Monitor, “We will support Demirtas, because he has demonstrated several times in parliament that he stands up for Alevi rights and demands.” Kenanoglu then asked and answered, “Would Ihsanoglu dare to come to the Sivas massacre commemoration ceremonies on July 2? I doubt it, because it would be against the status quo.”

On July 2, at the Siva ceremonies, Aydin Deniz, the general secretary of the Hubyar Sultan association, told Al-Monitor, “Ihsanoglu is not here. It was a good step for him to visit some Alevi sites, but that is not sufficient. We support Demirtas because he was the only candidate who voiced the need to abolish the Religious Affairs Directorate, along with our other needs. Demirtas was the only political party leader who came to Sivas. That takes courage.”

Alevis are not the only group fond of Demirtas’ political rhetoric and struggle. Tatyos Bebek, a member of the Armenian community’s Thought Platform, said, “Demirtas is one of us. We are the underrepresented and politically mistreated. He represents all these groups. He accepts our differences and struggles to find ways to coexist in harmony. In our quest to be equal citizens in Turkey, I support him.”

Other Christians expressed similar sentiments. Tuma Celik, the European Syriac community’s Turkey representative and the editor of the only Syriac-Turkish newspaper, Sabro, told Al-Monitor, “In Turkey a single status quo identity dominates politics. This understanding excludes Syriac identity. Not only were we never a part of the process, but even our existence was quietly ignored. Demirtas not only refuses to be coopted by the status quo, but he acknowledges the existence and wealth of different ethnic, religious and cultural identities of this land. He aims to represent the political demands and rights of these groups, hence he has emerged as the only candidate we can support.” Of note, the first Syriac parliamentarian, Erol Dora, was a BDP candidate, in 2011.

The HDP has proven itself to be inclusive of even controversial underrepresented identities. For example, in the March 30 municipal elections, five LGBT candidates out of a total of 10 countrywide were nominated on the HDP’s lists. The party has not only supported them in its rhetoric, but has also brought various groups into the political process, forcing other parties on the left to gradually alter their platforms.

Baris Azad, an Ezidi (Yezidi) sociologist, activist and writer, told Al-Monitor, “Just as for all other oppressed groups of Anatolia, for Ezidis, Demirtas’ political platform opens a door of possibilities.”

Demirtas, born Kurdish and Sunni in an eastern province and raised in the southeast, was educated in Ankara and now strives to be a part of national, not just regional, politics. He has brought together diverse groups whose common denominator is underrepresentation. Aliza Marcus, a seasoned journalist with Kurdish expertise, emphasized one important factor, however. “Even if all these groups go out to support Demirtas, that still would not be sufficient to win the presidency,” she said. Demirtas' presence on the ballot will, however, pose a challenge to both Ihsanoglu and the AKP's candidate, Prime Minister Recep Tayyip Erdogan.

So far in his brief political career, Demirtas seems to have been successful in winning over the people he has approached. Like the Islamist movement in the 1990s, the HDP stems from a grassroots movement. Also like the Islamists, it is on the threshold of moving from a marginal party of minorities to the mainstream.

As Kurdish groups become a center of attention in the Middle East, aiming to look beyond Kurdish identity, Demirtas has the potential to unite a coalition that could make a difference in Turkey's 2015 elections. Only a decade ago in Turkey, it would have been unthinkable for a mainstream party to take pride in attracting a large number of Kurdish votes. The success of a Kurdish party moving beyond Kurdish identity and unifying the left could well be in the realm of possibility in the next elections.

Demirtas is indeed worth watching.