Experts question the logic behind Ankara’s decision to station troops in Qatar and anger key Arab powers, just as matters are coming to a head in Syria and Iraq. 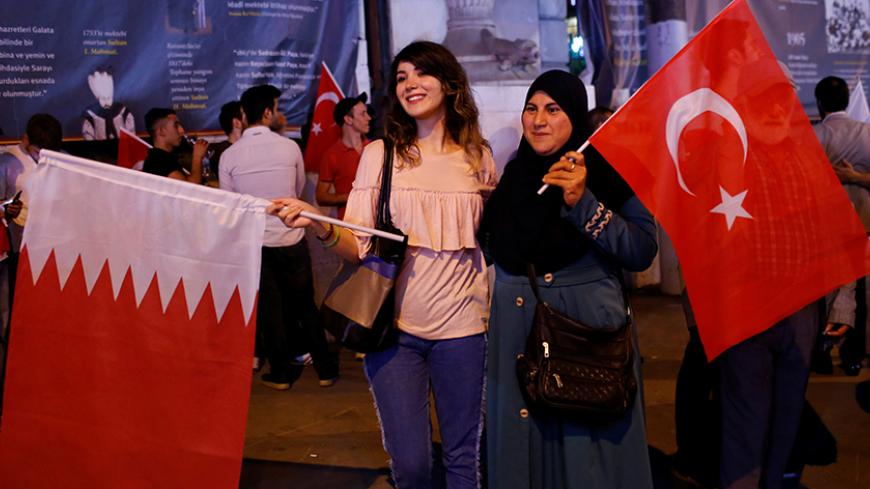 Women pose with Turkish and Qatari flags during a demonstration in favor of Qatar in central Istanbul, Turkey, June 7, 2017. - REUTERS/Murad Sezer

The Qatar crisis may be shaping up as another instance of President Recep Tayyip Erdogan’s “jump before you look” approach to foreign policy. Rowing against the current seems to have become a feature of Ankara’s relations with the Middle East since the start of the now all but dead Arab Spring.

Former Prime Minister Ahmet Davutoglu was clear about Turkey’s role five years ago, when he was still the foreign minister and the architect of many of Ankara’s regional failures. “Turkey is seen in all Middle Eastern societies today not just as a friendly and brotherly nation, but also [as] a country that has the power to lead a new idea and a new regional order,” he told parliament in April 2012.

Turkey, however, did not become the leading power that was reshaping the region. Ankara is happy today if it can protect its own security interests. Developments it never foresaw left it facing problems on more than one front in the Middle East.

The Qatar crisis has added a new dimension to these and will require diplomatic subtlety to manage. Instead of opting for the safety of the middle ground and avoiding jeopardizing its ties with the members of the Gulf Cooperation Council, Ankara has sided with Doha.

Erdogan said the treatment of Qatar was “inhuman,” and Ankara hastily decided to send troops to the blockaded Gulf state in a show of support. The agreement granting Turkey a military base in Qatar actually predates the current crisis, but its ratification by parliament was on hold due to technical reasons.

The timing of the government’s decision to fast-track the ratification through parliament was, nevertheless, significant. Coming immediately after the blockade on Qatar, this was seen as an act of defiance against the Saudi-led Arab coalition.

Ankara insists there is no link between the stationing of Turkish forces in Qatar and the dispute this country has with its neighbors. “The tension and dispute between the Gulf states is completely irrelevant [to the military base],” Deputy Prime Minister Numan Kurtulmus told reporters in Ankara July 3.

“Turkey’s military base in Qatar is not just for Qatar’s security, but for the security of the whole region,” he said, emphasizing that the base would stay.

Erdogan has rejected demands by Riyadh and its allies that Qatar close down the Turkish base, calling this demand “unlawful.”

The visit by Qatar’s Defense Minister Khalid bin Mohammed al-Attiyah to Ankara last week, which took place as Turkish troops started to trickle to their base in Qatar, merely added fuel to speculation about Ankara’s intentions.

Ankara’s determination to keep its troops in Qatar prompted Saudi Arabia and its allies to raise the urgency level of their demand that this base be closed down. This has become one of their top three demands on Qatar, which is being asked to concede to a 13-point list of demands for the blockade placed on it to be lifted.

This issue has also left Turkey and the Gulf States in a potentially adversarial position and may have ended Ankara’s desire to station troops in other Gulf states. Saudi Arabia has already refused Turkey’s offer on the grounds that it has no need for such a base on its territory.

Saudi Arabia’s ambassador to Turkey, Walid al-Khuraiji, made his position clear in an interview with Daily Sabah Arabic last week. “We hoped that Ankara would stay impartial for the sake of keeping good relations with all the Gulf countries,” Khuraiji said in his interview, which Saudi media also picked up.

“When it sided with Doha, Ankara lost its neutrality,” he added, warning that “bringing foreign armies from regional countries and armored mechanisms is a military escalation whose consequences Qatar will bear.”

Khuraiji echoed an earlier warning by Bahrain’s Foreign Minister Sheikh Khalid bin Ahmed al-Khalifa, who tweeted on June 25 that the “deployment of foreign troops with their armored vehicles is a military escalation for which Qatar will bear the consequences."

Khalifa’s remarks contradicted his words in Istanbul on June 10 during his visit to discuss the Qatar crisis with Erdogan. He said then that the Turkish base in Qatar aimed to protect the region from threats that might emerge. His volte-face shows that the Saudi-led coalition is determined to tighten the screw on Qatar and is annoyed by Turkey’s efforts to prevent this.

While Doha is clearly happy over the strong support it is getting from Ankara, many in Turkey are questioning the government’s motives in sending troops to Qatar at such a sensitive moment.

Retired Ambassador Ali Tuygan says the rationale of Turkey having a base in Qatar has not been properly explained to the public. “If this was just a matter of providing military training to a friendly country, why need a base? If the two countries faced ‘common’ threats, what were these?” Tuygan asked in an article he wrote for his blog, Diplomatic Opinion.

Turning to the much more immediate crisis for Turkey, Tuygan indicated that the stakeholders in Syria were preparing themselves for the imminent defeat of the Islamic State and jockeying for positions of strength.

“At this particular juncture, Qatar can’t be Ankara’s one and only friend in the world and Ankara can’t keep engaging in more and more battles,” Tuygan argued.

Retired Maj. Gen. Armagan Kuloglu told Al-Monitor that stationing combat troops in Qatar at this time sends the wrong signal to the world. “For example, does this mean Turkey will take on the other Gulf states for the sake of Qatar?” Kuloglu stated.

This crisis comes at a time when Turkey has been moving forces and heavy artillery to the Syrian border. Press reports indicate that Turkey is preparing for a possible operation in Syria to roll back territorial gains near its borders by Kurdish fighters from the People's Protection Units (YPG). Ankara says the YPG is a terrorist organization that targets Turkey.

Kuloglu said Ankara’s stance in the Qatar crisis has cooled Saudi Arabia and the other Gulf states toward Turkey. He said this makes it unlikely that Turkey would get enthusiastic support from these countries if it mounts a new military operation in Syria.

Mithat Rende, who was Turkey’s envoy in Qatar from 2007 to 2009, said this crisis caught Ankara by surprise. “We were not expecting it. No one from the region consulted us. They decided to trim Qatar’s sails and bring it into line without telling us,” Rende told Al-Monitor. “Turkey is not considered a player. If we were, they would have asked us to intervene.”

Rende said Turkey’s sending military forces to Qatar at such a moment was a gesture of support. “The blockade of Qatar is unacceptable and immoral. That is why Turkey’s standing by Qatar is understandable from a moral perspective,” he said. “It is clear, though, that the Turkish soldiers will not have to fight.”

Rende said Turkey should have played a better role — for example, as a facilitator between Kuwait (which is emerging as the principal mediator in this crisis) and Qatar — when issues emerged that needed an extra helping hand.

With many predicting that this crisis could take some time to resolve, Turkey may yet be forced to recalibrate its policy in order to bring it more in line with the realities on the ground.

by Haitham EL-TABEI with AFP correspondents in the Middle East | AFP | May 17, 2022
END_OF_DOCUMENT_TOKEN_TO_BE_REPLACED