Turkey’s immediate support of Qatar has exposed its lack of leverage with Saudi Arabia and other Gulf states and left it scrambling for a way out of an intractable situation. 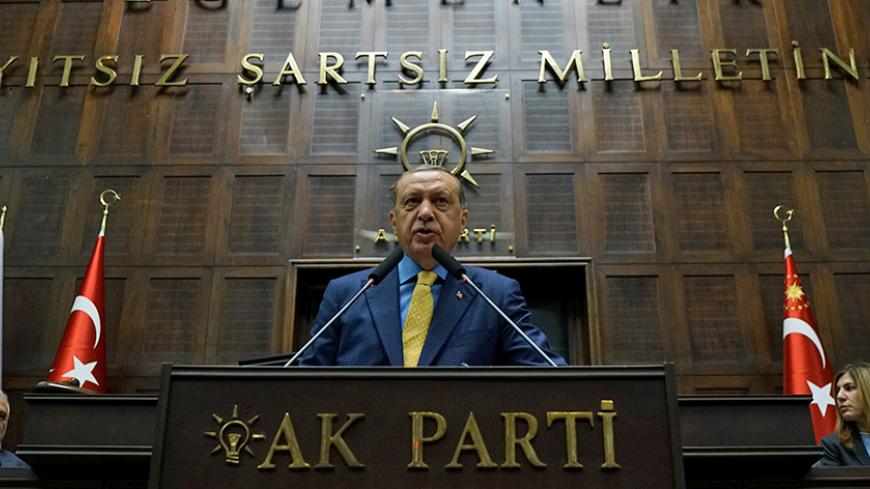 Turkish President Recep Tayyip Erdogan addresses lawmakers from his ruling Justice and Development Party during a meeting at the Turkish parliament in Ankara, Turkey, May 30, 2017. - REUTERS/Umit Bektas

Turkey may have recklessly jumped into the fray on Qatar’s side in its dispute with Saudi Arabia and other Gulf states without much forethought as to the medium- and long-term consequences. The realities Ankara faces on the ground, however, are forcing it to try to extricate itself from this crisis with minimal damage to its ties with Saudi Arabia and other the members of the Gulf Cooperation Council.

Foreign Minister Mevlut Cavusoglu was in the region last week on a tour through Qatar, Kuwait and Saudi Arabia, trying to carve out a niche for Turkey as a mediator. His mission failed due to conflicting signals from Ankara.

Turkey’s ties with the Gulf states were on a positive trajectory prior to this crisis and Ankara’s regional influence appeared set to increase at a time when matters in Iraq and Syria are coming to a head.

These ties are in question now, thanks to President Recep Tayyip Erdogan’s unequivocal support for his close friend the emir, Sheikh Tamim bin Hamad Al Thani. Simply put, Ankara is facing what looks like an impossible task. It regards Qatar as its main Gulf ally and is openly supporting it in the present crisis, but it is also wants to develop strategic ties with Saudi Arabia, Qatar’s main foe.

For a host of pragmatic considerations, Ankara also wants to maintain working relations with Iran, Saudi Arabia´s regional rival and a key backer of Qatar. How it hopes to achieve all of this, when the lines have been drawn so firmly, is not clear. This is not the first time that Ankara has misread the situation in the Middle East since the Arab Spring. There are indications that it underestimated the determination of the Saudi-led Arab coalition against Qatar, too.

Ankara was hoping to play the role of mediator despite having clearly taken sides. The timing of Erdogan’s move to fast-track a bill to send up to 5,000 troops to Qatar, even though the move was based on a decision by the two countries before the present crisis, also sticks out.

On June 18, retired Ambassador Oguz Demiralp wrote for the news site T24 that he believes Cavusoglu’s attempt to carve out a mediation role for Turkey reflects an awareness that supporting Qatar “has not increased our chances of being able to contribute to a resolution of this problem.”

He added, however, that everyone is aware of the intense relationship between Ankara and Doha, which clearly undermines Turkey’s efforts at mediation. Demiralp also questions the logic of sending forces to Qatar at such a delicate moment. “If the Saudis get angry and find a legal excuse to enter Qatar, does this mean Turkish soldiers will fight against them?” he asked.

Ankara’s inconsistent position appears not to have perturbed Cavusoglu, though. He claimed last week that Turkey has remained neutral and is “expending great efforts to resolve the problem between brothers.” Cavusoglu spoke before flying to Mecca, where he was to be received by King Salman bin Abdul-Aziz Al Saud on June 15, following his talks in Doha and Kuwait City earlier in the week.

Three days before Cavusoglu’s remark, during a June 13 meeting for his party's parliament members, Erdogan blasted the blockade on Qatar as “inhuman and un-Islamic.” He also rejected claims that Doha was supporting terrorism.

No official statement was issued after Cavusoglu’s talks with Salman, but the mood on the Saudi side was reflected by United Arab Emirates Foreign Minister Anwar Gargash while talking to reporters in Paris earlier this week. Gargash said that Qatar’s isolation could last years and urged Turkey to remain balanced in the crisis and understand that it is in its interest to support Arab efforts — meaning, of course, the Saudi-led effort against Qatar.

Cavusolgu said at a joint press conference later with his Bahraini counterpart that Erdogan had told Khalifa he wanted the Qatar crisis to be resolved by the end of Ramadan. Khalifa’s response, however, underlined Ankara’s weak position. He informed reporters he had told Erdogan that “they had no time to act politely as long as long as Qatar refused to honor its commitments.”

During the same press conference, Cavusoglu said Turkey’s decision to station troops in Qatar was not directed at any Gulf country and that the force would contribute to the security of the whole region. His words appeared to fly in the face of claims in the pro-government media that Turkish troops were being sent to Qatar as a sign of support for that country in its difficult time.

There were subsequent reports in the Arab media that Riyadh had rejected a Turkish request to station troops in Saudi Arabia, as it has done in Qatar. In a recent interview with the Portuguese broadcaster RTP, Erdogan said that during his last visit to Riyadh in February he had suggested that Turkey should establish a military base in Saudi Arabia, too.

Over the weekend in what was clearly a snub to Erdogan, the official Saudi Press Agency quoted an unnamed official as saying that "Saudi Arabia cannot allow Turkey to establish military bases on its territories."

Last week, in what was seen as another sign of dissatisfaction with Ankara, Saudi Arabia also detained two correspondents from the Turkish state-owned TRT World network, who were in the country to cover Cavusoglu’s visit. The reporters were released after Cavusoglu intervened.

Former Foreign Minister Yasar Yakis, who is also a former member of Erdogan’s Justice and Development Party, of which he was a co-founder, pointed out in an op-ed for Arab News that this crisis has to be regarded as an intra-Arab affair in which countries outside the Arab world — such as Turkey — should not interfere.

“Arab countries … will find ways to sort out the problem sooner or later. When they do they will be reconciled, but the bias of non-Arab countries will not be forgotten,” warned Yakis, who has served as as ambassador to Riyadh and Cairo.

Demiralp echoed the warning. “At first glance, it seems this crisis will continue for a long time. But these are Arab nations. All of a sudden you might see them kiss and make up with relish, while you are left offside,” Demiralp argued, using a soccer term. “This is why we have to be careful,” he added.

Having failed to heed such exhortations, and choosing instead to throw his weight behind Doha, Erdogan is likely to maintain this position, if for no other reason than to appear consistent in the eyes of his supporters. It is not clear, though, how he plans to ensure that ties with the Gulf states remain robust.

What is clear is that by sending Cavusoglu to the region last week, Erdogan at least acknowledged, albeit indirectly, that Turkey faces a difficult situation in Qatar and is seeking a way out without losing face.