By backing Qatar, Turkey faces economic losses in the Gulf but improved economic ties with Iran 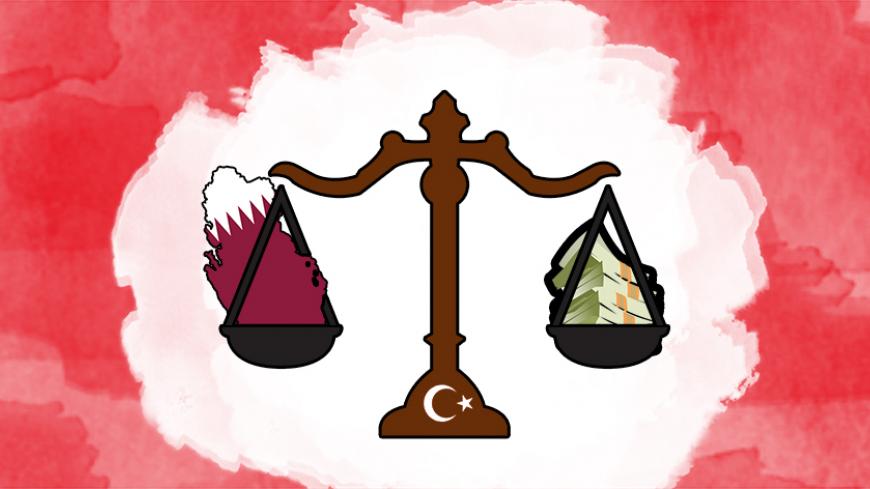 Turkey has suffered heavy economic losses over the past few years because of its misguided foreign policy in its relations with Egypt, Libya, Syria and Iraq and other regional markets. Its economy also received serious blows from Russian sanctions that followed Turkey’s shooting down a Russian jet in November 2015. Now, by taking a position supportive of Qatar in the blockade imposed by the Gulf countries and led by Saudi Arabia and Egypt, Turkey is risking further economic damages.

Even before alleviating the heavy losses inflicted by the Russian sanctions on its exports, tourism and foreign contracting, Turkey faces serious economic disadvantages by becoming a party to the Qatar crisis.

According to figures released on July 1 by Turkey’s Exporters Assembly, the country’s overall exports actually grew by 1.8% to $12.1 billion. But the negative trends with the Gulf countries have been causing concerns.

Meanwhile, exports to Qatar rose by 49% after the crisis erupted in June, rising to $53.4 million from $35.8 million. The Qatar crisis positively impacted the economy via trade relations with Iran, and exports to that country increased by 8.5% from $233 to $250 million.

Although monthly data may not be adequate to determine a firm, long-term trend, Turkey’s business world is questioning whether Turkey made the right move by taking a position against Gulf countries instead of standing as a mediator.

Mithat Yenigun, the president of the Turkish Contractors Union (TMB), is among those worried. “We are watching developments with wariness. Our member companies have major construction projects in Qatar, Saudi Arabia and all over the region. We were hoping that Turkey could have been a mediator in the crisis with a balanced approach to both sides,” he told Al-Monitor.

He noted that there were major developments in relations with Qatar because of the personal initiatives of President Recep Tayyip Erdogan. “Saudi Arabia leads the Gulf countries where our contractors operate. Qatar takes the second place. Until now, we have completed contracts totaling $19 billion in Qatar. Kuwait occupies the third place. We also have important projects in UAE and Bahrain. About 40% of our foreign contracting services are in Gulf countries. For the time being, the issue is more of a political nature, not economic. But developments worry us,” Yenigun said.

In a June report, Turkey’s Construction Materials Manufacturers Association — which groups companies exporting heavily to the region — said, “The crisis that indirectly implicates Turkey will negatively affect the exports by construction materials producers to those countries.” The report predicted the crisis is not likely to be overcome in the short term and warned, “Gulf countries could reduce their imports from Turkey, which is supporting Qatar. Moreover, exports to Qatar are becoming more difficult and costly because the embargoes imposed by Qatar’s foes.”

Turkey’s Economy Minister Nihat Zeybekci on July 12 met in Ankara with Qatar's Economy and Trade Minister Ahmed bin Jassim bin Mohamed al-Thani. Zeybekci said the actions taken against Qatar could be intended to cause mayhem. “But we prevented that … we met the daily needs of our Qatari brothers with 197 cargo planes, 16 semi-trailers and a ship,” he said during the joint press conference.

The Qatari minister said Turkey had been on their side from day one and expressed gratitude to Erdogan.

The support to Qatar prompted resistance against Turkish export products in Gulf countries, and campaigns were launched in social media against Turkish products. Yusuf Cevahir, the president of the Turkish-Saudi Business Council, said boycotts have not yet affected the situation on the ground, but the political trends may well disrupt new investments. Mehmet Habbab, the president of the Turkey-UAE Business Council, predicted the UAE will follow Saudi Arabia but noted Dubai and Abu Dhabi could have divergences over the crisis.

One positive aspect of the Qatar crisis was lowering tensions between Ankara and Tehran.

Only in February did Erdogan during a tour of the Gulf harshly criticize Iran and accuse it of “Shiite sectarianism and Persian nationalism.” Because of the prevailing tension, Zeybekci’s visit to Tehran in February and the opening of the Turkish Trade Center in Tehran were postponed.

Both countries then lined up with Qatar in the crisis, and bilateral ties between Turkey and Iran suddenly improved. On July 10, Zeybekci went to Tehran accompanied by industrialists, businessmen, contractors and exporters.

In short, the policy Ankara follows in the Qatar crisis made Turkey a party to the Gulf crisis. Political, military and economic consequences of such a stance are inevitable. Indications are that Turkey may well face an indirect embargo of Saudi Arabia, Gulf countries and other countries that support them.

Erdogan’s warm personal relations with the Qatari leaders, the increase in the flow of Qatari capital to Turkey and opening its doors wide open to Turkish export goods do not appear to be enough to make up for the losses with other Gulf countries.

While Turkey is still far from the $30 billion annual volume of its trade target with Tehran, to announce a new target of $50 billion is not compatible with economic realities.

Erdogan is now expected to go on a tour of the Gulf countries. But to make gains from such a tour while robustly supporting Qatar is not realistic.