Turkey’s main Kurdish political movement has called for street protests against government oppression but faced a stiff police blockade on the first day of the initiative. 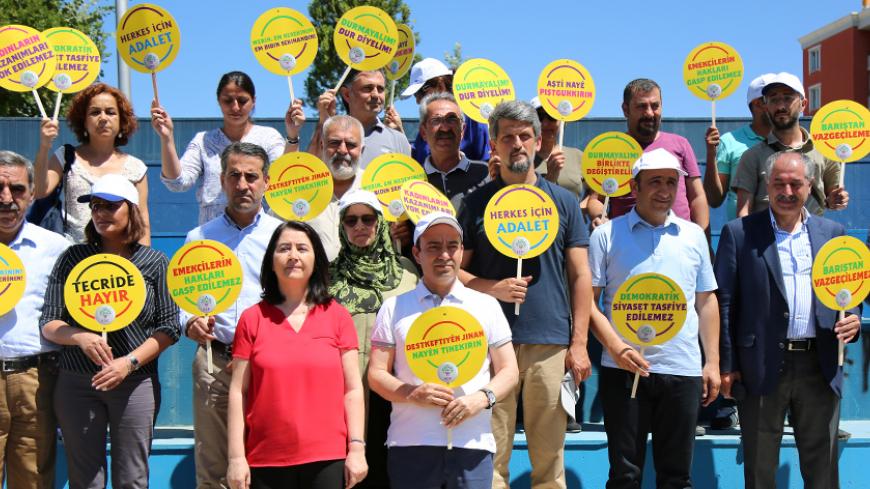 Pro-Kurdish opposition Peoples' Democratic Party lawmakers hold placards in Kurdish and Turkish during a protest against a state crackdown, which has seen dozens of lawmakers and mayors jailed over suspected links to militant separatists, in Diyarbakir, Turkey, July 26, 2017. - REUTERS/Sertac Kayar

DIYARBAKIR, Turkey — On the morning of July 25, Diyarbakir, the central city of Turkey’s mainly Kurdish southeast, was visibly gripped by commotion. The police had erected barriers around a park in the city and blocked all streets leading to the place. The reason for the extraordinary measures was the parliamentary group meeting that the Peoples’ Democratic Party (HDP), Turkey’s main Kurdish political movement, was planning to hold in the park.

The parties’ parliamentary group meetings are normally held in parliament, but the HDP this time opted for outdoors following a decision to take to the streets against the clampdown the party has faced since its landmark electoral success in June 2015. Ankara’s suppression campaign has intensified under the state of emergency since last year’s coup attempt, extending to all oppositional quarters. Hundreds of HDP members, including lawmakers and party leader Selahattin Demirtas, have landed behind bars, while dozens of Kurdish-run local administrations have been handed over to government-appointed trustees.

Under the state of emergency, the authorities had denied permission to almost all HDP applications to hold public demonstrations. This time permission was granted — or so the party believed until the participants began to gather for the event, which was to be followed by a weeklong sit-in called a “democracy watch.” Only the lawmakers were allowed to enter the park; all other party activists were barred from the venue despite all protests and arguments. The lawmakers, however, were up for further frustration. When they stepped into the park, they discovered that all green spaces had been cordoned off as well, with only the cement ground in the middle made available to them.

This meant the sit-in was supposed to proceed under a scorching sun, with summer temperatures often exceeding 40 degrees Celsius (104 degrees Fahrenheit) in Diyarbakir. Exasperated, HDP spokesman Osman Baydemir likened the scene to the Battle of Karbala, a milestone episode in Islamic history in which Husayn ibn Ali, the grandson of Prophet Muhammad, was left without water in the desert and then killed in fighting by the men of Umayyad caliph Yazid.

Speaking at the event, which Al-Monitor attended, Baydemir said, “Why are we here in this Karbala heat? They want to [kill] people. They want to suppress a people, to rule it through tyranny, oppression and isolation. So, we are here … to say 'no' to tyranny and call once again for equality, freedom and an honorable peace.”

A former mayor of Diyarbakir and a leading figure in the Kurdish movement, Baydemir said “the blockade” of the park illustrated the state of affairs in Turkey today. “This park was built during my tenure in Diyarbakir. The trees here grew with the labor of the people. But today, a party that has won 70% of the vote in this city cannot even hold a gathering here, and even the officials of our provincial and district branches are being barred from the park,” he said.

Stressing that they had been denied even the shade of the trees, he added, “It’s almost as if a Karbala is being imposed on the HDP. But if you insist on being Yazids, we swear we are ready to be Husayns.”

Baydemir then sang a part from Iraqi Kurdistan’s national anthem — “Ey Reqib” — a tune popular among all Kurds. In a symbolic protest, he and his fellow lawmakers paced back and forth at the venue, imitating prison conditions.

HDP lawmaker Nimetullah Erdogmus told Al-Monitor that the party’s protest aimed to contribute to efforts to overcome the political crisis gripping the country. “There is clearly a political crisis. The country is in a bottleneck — in a stalemate. The reason the HDP is here today is to initiate a debate [on how] to overcome this crisis,” he said. “And the reason why we are starting off from Diyarbakir is to have a debate on our own policies first as we look for a way out in terms of Turkish politics in general.”

HDP lawmaker Huda Kaya described the campaign against the HDP as a string of “detentions, arrests, character assassination campaigns, tens of thousands of human rights violations, disrespect to labor and human life, and millions of sufferings.” In further remarks to Al-Monitor, she said, “We are faced with a mentality that denies us even the shade of a tree. This is really bringing to mind Karbala. But we are going to keep up the struggle against this mentality.”

For the “democracy watch” that began after the speeches, the HDP group took refuge in a tiny corner of about 1 square meter (roughly 11 square feet) graced with shade at that time of day. The sit-in was scheduled to continue in various cities until the end of July.

The protest may bring to mind the 25-day “Justice March” from Ankara to Istanbul that the main opposition Republican People’s Party completed earlier in July, but there is one important difference: The HDP has not received support from any other oppositional quarter, and even its own activists are barred from taking part in the protest. The party is making an effort to raise its voice, but the authorities are taking all measures to muffle it.