Civil society groups in Syria’s Idlib are doing what they can to provide aid to about 1 million citizens, despite pressure by Hayat Tahrir al-Sham, an al-Qaeda-linked group that is trying to impose its own presence in the province. 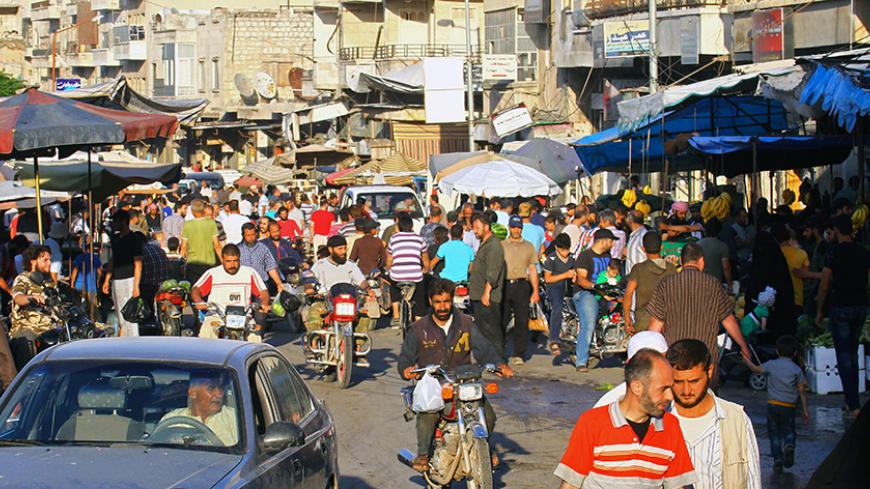 When Hayat Tahrir al-Sham (HTS) stormed into town, Yehiya Sobieh rounded up as many people as he could to start a protest. On June 9, the people of Maarat al-Numan, a small city located in Syria’s last rebel-held stronghold of Idlib, mobilized to protect local fighters from the al-Qaeda-linked group.

Many chanted “Shabiha, Shabiha, leave our city now,” which is a term that originally referred to state-sponsored gangs that terrorized protesters at the beginning of the Syrian revolution. That day, demonstrators held their ground until HTS retreated, signaling a clear victory for civil society.

“Al-Qaeda came to our streets to try to kill and arrest our soldiers. That’s why civil activists started encouraging everyone to protest,” Sobieh, an independent digital security activist from Maarat al-Numan, told Al-Monitor over the phone.

“[Al-Qaeda] tried to shoot in the air and then shoot at our feet, but we didn’t disperse,” he said.

Tensions have mounted between armed groups and activists in Idlib since Russia, Turkey and Iran brokered a cease-fire May 4. The halt in bombardments has enabled local councils and nongovernmental organizations (NGOs) to tend to the needs of nearly 1 million people trapped inside the province. But while the cease-fire holds for now, activists and analysts say that armed groups are undermining the role of civil society.

Omar Abu al-Huda, an activist who volunteers with Al-Khadra, an NGO that educates and provides relief to children and women in Idlib, told Al-Monitor that HTS is the biggest threat to civil society. The extremist group, he said, routinely seizes aid convoys and disrupts service provisions. However, that is only the tip of iceberg.

“[HTS] has tried to kidnap and kill activists,” said Abu al-Huda via WhatsApp. “We have to be careful. The group has even laid land mines to target cars and convoys.”

Neither Abu al-Huda nor his colleagues at Al-Khadra have been targeted so far, but their work could be affected in other ways. On May 11, HTS stated their intention to oversee Idlib’s informal money transfer offices. Activists feared that if the group took over the informal banking system, then donors would cut support to evade financing a designated terrorist group.

Yet Armenak Tokmajyan, a Turkey-based analyst for the International Crisis Group who has been researching conditions of civilian resilience in Idlib, noted that it would not be in the best interest of HTS to monopolize the entire informal banking system.

“Imagine if the money stops coming [through to Idlib]. The affected population will go after HTS,” Tokmajyan told Al-Monitor. “Many of these offices also have alliances to armed groups. So harming their business would mean harming the interest of their allies.”

Rather than fully sabotaging relief services, HTS has tried to win support by establishing its own civil department to oversee provisions. Ahrar al-Sham, a rival ultraconservative militia that wields considerable power in Idlib, has adopted the same strategy.

“Local councils and civil society organizations are constantly battling HTS and, to a lesser extent, Ahrar al-Sham, over who will provide services. These groups of course have weapons to push their agenda. But the success of councils and civil society organizations depends on the popular legitimacy that they get by providing services, and the delicate balance of power among armed groups in each town,” Tokmajyan said.

The balance of power is certainly delicate. HTS and Ahrar al-Sham have clashed repeatedly in recent days. On July 18, HTS attacked Ahrar al-Sham in southern Idlib after the latter raised the Syrian revolutionary flag. At least 12 people were killed by the following day.

Each alliance has attempted to brand themselves as the face of the revolution. But now HTS has the upper hand. On July 23, the group took control of Idlib province before a car bomb exploded and killed nine of its fighters. And while civilians generally favor Ahrar al-Sham, activists have maintained their distance from every armed group.

“Ahrar al-Sham has tried to help carry out our services, but [activists] always reject their assistance,” Sobieh said. “It is important for us to be against anyone who has weapons. We want civil society to stay independent so we must never bear arms.”

Despite the obstacles, civilians prefer to deal with civil society more than armed groups. That was apparent at the beginning of this year when residents in Idlib city elected their first civilian council. The Army of Conquest (Jaish al-Fatah) — a now disbanded coalition that included fighters from HTS and Ahrar al-Sham — had been supplying services until civilians persuaded them to give up responsibility over city affairs.

Yet challenges persist. Several activists told Al-Monitor that they need more support from the global community, or else civilians will turn to armed groups for basic provisions.

Sewage systems and electricity grids are in desperate need of repairs due to years of regime bombing. Health clinics and schools are also chronically under-resourced. Sobieh claims that most organizations do not have a third of the budget they need to assist civilians.

A man who goes by the name of Mohammad Bonbon, who lives in Idlib city, told Al-Monitor that the electricity cuts pose a major hassle for civilians. “There are always problems,” he said. “The local council usually tells us how many hours of electricity we have each day. But it is never very long and the duration always changes.”

The situation promises to deteriorate if the cease-fire breaks down and bombing resumes. Civilians fear that with HTS now controlling Idlib, the regime may receive international support to strike again. Activists realize that whatever happens next is out of their control. All they can do is help as many people as possible.

“Maybe the regime will return to attack us,” said Sobeih. “But right now, civilians want help [from civil society]. They don’t want to see weapons on the streets.”