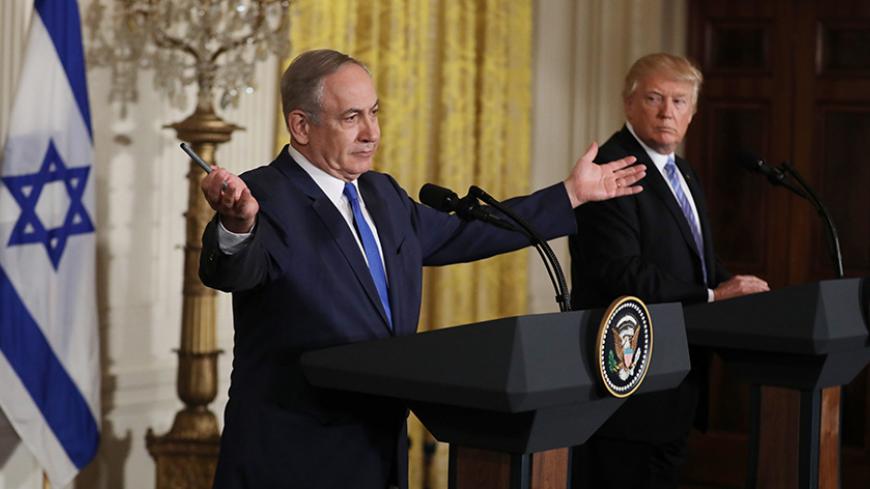 Just over half a year after Donald Trump entered the White House, the first public dispute between him and Prime Minister Benjamin Netanyahu's government, i.e., Netanyahu, has surfaced. Israel opposes the cease-fire agreement in southern Syria, Netanyahu told reporters July 16, after a meeting in Paris with French President Emmanuel Macron. Netanyahu argued that the agreement, announced by the United States and Russia July 7 at the G-20 meeting in Hamburg, Germany, perpetuates Iran's presence in Syria.

Speaking on the condition of anonymity, an Israeli source intimately familiar with what is happening behind the scenes told Al-Monitor emphatically, “This is not just some disagreement. This is a real clash, pitting Israel against Russia and the United States. It reflects Israel's conspicuous disappointment with the way that the Americans let [Russian President Vladimir] Putin outmaneuver them, leading to the sellout of Israeli interests in the Golan Heights and Lebanon versus the Shiite axis.”

Netanyahu allowed the disagreement to come to the forefront, taking all possible responses by Trump into account. Still, unlike previous presidents, Trump cannot be analyzed. He is unpredictable, and there is no way to assess his reaction in advance. As of this article's publication, there has been no official response from the president or Washington. On the other hand, the Americans have been investing quite a bit of energy behind the scenes in an attempt to convince the Israelis that their concerns are exaggerated. So far, the Israelis have not been convinced.

Over the past few months, Israel had been involved in the contacts between the parties that led to the implementation of the cease-fire. Israel had a foothold in all matters concerning the region discussed by the superpowers — the southwest, which Israel borders. Israel participated in these talks with the Americans, Jordanians and Russians. It also conducted separate talks with each of the parties.

While discussions were underway, Israel reiterated on numerous occasions that there must be no Hezbollah or Iranian presence whatsoever in the buffer zones that will be declared along the various borders. Another Israeli demand was that Iran be prevented from establishing military bases in Syria, from creating or leasing a port along the Syrian coast and from rebuilding Syria's arms industry.

In a separate effort, Israel made it very clear that it would not accept the creation of Hezbollah factories to produce precision missiles in any part of Lebanon. “Their precision [missiles],” a senior Israeli military official told Al-Monitor on the condition of anonymity, “constitute Hezbollah's greatest threat against us right now. We will not just sit here with our arms folded if that group gets anywhere near obtaining the capacity to produce precision missiles independently.”

The emergence of an agreement between Russia and the United States irritates an old wound. The last time Washington reached a similar agreement was the nuclear deal with Iran, during the Barack Obama administration. Netanyahu fought against that until the very last minute and even beyond.

Now, with the president “most supportive of Israel ever” in the White House, Netanyahu finds himself facing the same situation. The only difference is that in these talks, Israel had a voice at the table before an agreement was reached. This contrasts sharply with the situation during the Iranian nuclear talks, in which Israel was “kept out of the room” and had to rely on intelligence for information. “The Americans completely conceded to the Russians,” a senior Israeli military official told Al-Monitor on condition of anonymity. “The very names of Iran or Hezbollah do not appear in the agreement, and there is no expression of Israeli concerns at all. Our security needs are completely ignored.” The question now is what will Israel do about it?

One senior Israeli military official told Al-Monitor on the condition of anonymity, “For the first time ever, we have a conflict between the superpowers on our border. The Russians have between 3,000 and 4,000 troops in Syria, including special forces, fighter jets, bombers, anti-aircraft batteries and radar installations. The Americans have special forces there, too. The two parties have partitioned Syria between them, with the Americans north of the Euphrates River and the Russians south of it. Given these circumstances, it is only natural that our own freedom of action has been reduced, even if we don't admit it.”

Meanwhile, Israel is raising the ante with increasingly belligerent statements and even insinuating threats against Iran. “We will not let the Iranians and Hezbollah be the forces that will win,” said Maj. Gen. (Res.) Yaakov Amidror July 17. Amidror, who is thought to be close to Netanyahu, continued, stating, “At the end of the day it is our responsibility, not the responsibility of the Americans, or the Russians, to guarantee ourselves.” He added that keeping Iran and Syria from building launching pads in Syria was a primary goal and that Israel would not allow Iran and Hezbollah to take advantage of their victory in the long war in Syria and turn their focus on Israel.

It is safe to assume that the precise wording of Amidror's comments, made to the foreign press, originated in the Prime Minister's Office in Jerusalem. His remarks constituted an escalation in Israeli statements — which have consistently become more aggressive since the crisis began — as they included a significant threat: if Iran constructs certain kinds of infrastructures in Syria (or Lebanon), the Israeli military will be forced to attack and destroy them. While these statements were made in Israel, they were noted in Moscow, Washington, Tehran and other world capitals. Netanyahu is raising the threshold and drawing another red line along Israel's northern front.

The question is how seriously these threats will be taken by the superpowers and by Israel's enemies. The last time Netanyahu made such a threat and drew red lines, it turned out to be an idle threat. Over the past few years, Netanyahu has stated time and again that if the international community does not know how to block Iran's race to obtain nuclear arms, Israel will act alone. From Netanyahu's perspective, the nuclear agreement not only fails to prevent the Iranians from obtaining a nuclear capacity, it also turns Iran into a “nuclear threshold” state at the end of the agreement's 10-year timeframe. Yet, even though Netanyahu knew this, he preferred not to act. He allowed an operational window to pass, leaving Iran to enter the “immune zone.”

According to “fresh” leaks, which apparently could be sources from Israeli intelligence, Iran is still planning to construct a precision missile factory in Lebanon several dozen meters underground. That is also a kind of “immune zone.”

Will Netanyahu and his defense minister, Avigdor Liberman, allow this to happen? Since the whole issue is still in its infancy, it is too early to speculate. With investigations into Netanyahu piling up, it is in no way certain that he will even be prime minister when the possibility of launching such an attack becomes relevant.

In the meantime, Netanyahu considers his statement on the cease-fire to be particularly germane. Russian Foreign Minister Sergey Lavrov responded quickly to restore a sense of calm, noting that “Israel’s security interests were fully taken into consideration” in the agreement. In contrast, Washington responded with a thunderous silence.