Hamas-Israel prisoner swap could be close at hand

Negotiations between Hamas and Israel on a new prisoner exchange deal supposedly are progressing, which raises questions about what concessions each party is willing to offer for such a deal to materialize. 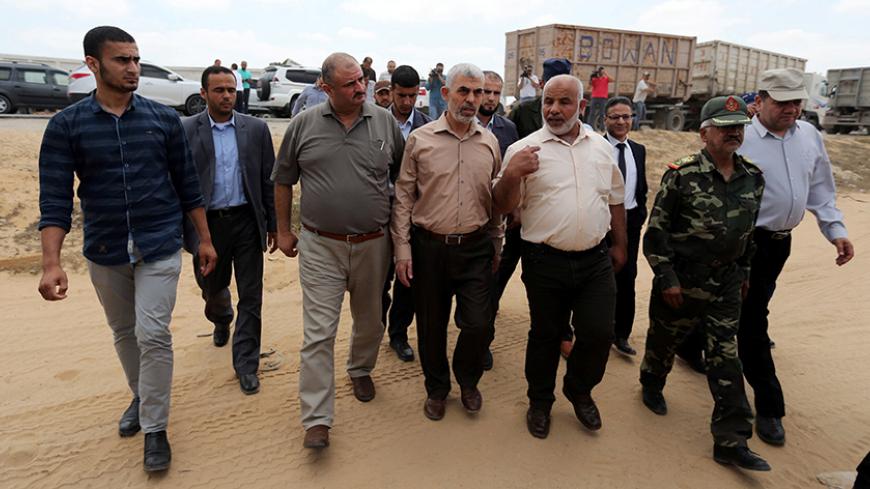 Israeli media outlets are reporting that Hamas and Israel have made remarkable progress in negotiating a potential prisoner exchange under the brokerage of a third party, but each side continues to provoke the other publicly.

Hamas wouldn't officially confirm or deny the story, but Hamas spokesman Hazem Qassem told Al-Monitor: “Hamas considers the release of Palestinian detainees from Israeli prisons a top priority since it is a core national issue. The movement’s participation in negotiations with Israel to approve a new prisoner exchange deal for Israelis detained by Izz ad-Din al-Qassam Brigades [Hamas’ military wing] must be preceded by Israel’s commitment to the previous exchange deal in 2011 and the release of those recaptured in 2014 after their release. Israeli leaks about the negotiations for a new exchange deal will not achieve their goals to extract stances and information from Hamas about its Israeli detainees. Israelis are demanding action and [putting] pressure on their government, which is neglecting the issue of their detainees in Hamas’ captivity.”

In June 2016, the family of detained Israeli Avraham Mangisto staged a sit-in in front of Prime Minister Benjamin Netanyahu’s office to demand the return of their son. Also, the families of Israeli soldiers Oron Shaul and Hadar Goldin threatened to make their periodic protests in front of Netanyahu’s office permanent, to demand that Israel arrange for the release of their sons' bodies; both men were killed in 2014.

There are more than 7,000 Palestinian detainees in Israeli prisons, including 330 from Gaza, 680 from Jerusalem and 6,000 from the West Bank.

It should be noted that for years, Hamas has refused to allow Red Cross access to Israeli prisoners. It rejected the most recent request on June 6.

Abdul Rahman Chedid, the director of Asra Media Office, a Palestinian prisoner rights advocacy group, told Al-Monitor: “The Israeli decision has declared war on Hamas’ detainees because it pressures the movement to release the Israeli soldiers and to respond to their families’ request to punish Hamas detainees in Israeli prisons. The decision might be the first in a series of sanctions Israel will put on Hamas detainees, and it was not prompted by violations that Palestinian detainees committed against the Israel Prison Service. It was rather an Israeli political and governmental decision. Punishing Gaza’s detainees in Israeli prisons began because Israeli soldiers are locked up in the Gaza Strip.”

The leaks about a possible exchange also coincided with the 11th anniversary of Hamas’ abduction of Israeli soldier Gilad Shalit in south Gaza in 2006. Shalit was detained for five years and released in 2011 in return for Israel releasing more than a thousand Palestinian detainees with long sentences.

Palestinian expert on Israeli affairs Mahmoud Mardawi told Al-Monitor: “Israel is not ready for a new exchange deal with Hamas due to the Israeli government’s partisan composition and its rightist inclinations. The parties participating in the National Coalition [referring to the government] — especially the Jewish Home party [HaBayit HaYehudi] — will refuse any new deal. The Jewish Home party is calling for recapturing the [Palestinian] detainees liberated as part of the 2011 deal. At the same time, the Israeli government is not refusing any brokerage efforts to launch negotiations with Hamas. Still, in case early parliamentary elections are announced in Israel, Netanyahu might approve a deal with Hamas to boost his popularity among Israelis. Returning detained soldiers to their families is an Israeli popular demand, and perhaps the United States may have asked Egypt to use the Hamas delegation’s visit to bring up the topic of Israeli soldiers held by the movement.”

The United States seems to be getting involved in the issue of Israeli soldiers detained by Hamas. US Ambassador to Israel David Friedman said June 26 that Washington is angry with Hamas for refusing to release the Israeli soldiers and believes Hamas is responsible for their families’ suffering.

US peace envoy Jason Greenblatt met with families of dead and detained Israeli soldiers June 23 and voiced his dismay over Hamas’ behavior, which he described as “inhumane.”

Khaled Meshaal, the former head of Hamas’ political bureau, said in April that some parties, which he did not name, offered to mediate in exchange negotiations between Hamas and Israel, but they faced two significant obstacles. First, Israel tried to ignore the issue and stressed that it is non-negotiable. Second, Hamas refused to start indirect negotiations at that time unless more than 60 prisoners who were released in the first exchange deal in 2011 and recaptured by Israel in mid-2014 were set free.

Between the Israeli leaks and Hamas’ reservation about the negotiations on a new exchange, there seems to be smoke with no fire. Israel and Hamas might be holding talks under the table, with Egyptian brokerage, for privacy purposes. But the failure or success of such a deal would bank on certain developments, mainly the ongoing normalization of relations between Hamas and Egypt as the expected mediator, Israel halting its punishment of Hamas prisoners, and a change in the Israeli government's composition.

Then there's always the chance Israeli intelligence might find its soldiers and bring them home without giving Hamas anything in return.