Both Hamas and Israel want to reach a prisoner exchange deal, but talks appear to be at an impasse over a group of Palestinian prisoners released in a previous exchange but later rearrested. 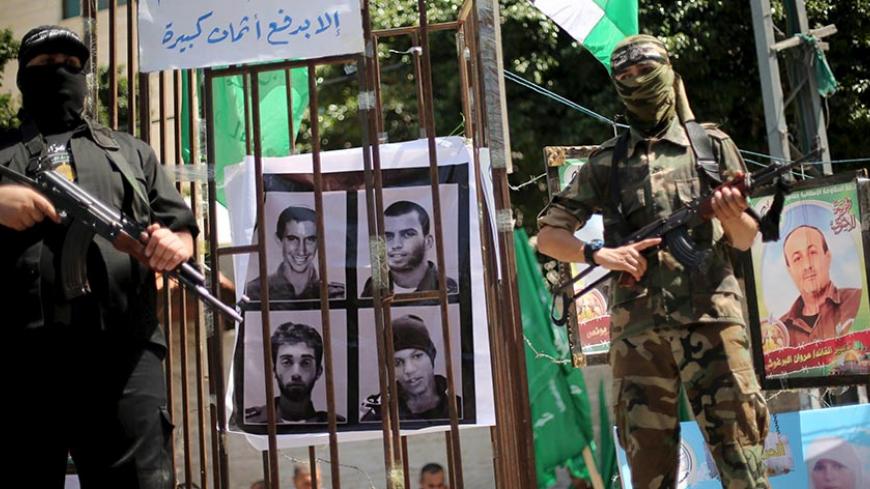 Against the backdrop of a recent serious escalation of the security threat along Israel's southern border, Israeli media published reports on negotiations for a prisoner exchange between Israel and Hamas. Leaks about the negotiations, sourced to spokesmen from both sides, were intended to put pressure on the opposing side and to present their red lines regarding any potential deal. Both sides now share a desire to reach a deal.

Hamas is in crisis and therefore wants to show the people of Gaza that it has accomplished something. Meanwhile in Israel, the families of Hadar Goldin and Oron Shaul, soldiers killed during the 2014 Gaza war, are intensely pressuring Prime Minister Benjamin Netanyahu and the members of his government to bring that episode to an end by obtaining the return of their sons' bodies, so they can give them proper burials.

Talk about a potential prisoner exchange has been coupled with the tightening of Israel's closure policy toward Gaza as well as toward Hamas prisoners in Israel. All of this is intended to coerce Hamas to agree to Israel's terms for a deal. The result thus far, however, has been an escalation in tensions in the south, culminating in the firing of a rocket at Israel and the bombing of dozens of Hamas targets by the Israel Defense Forces (IDF) in retaliation on Feb. 6.

Since the conclusion of Operation Protective Edge against Gaza in 2014, Israel has said that it will not release hundreds of Palestinian prisoners in exchange for the bodies of Goldin and Shaul. Hamas, however, is demanding that the deal be broad and comprehensive and that the release of the two fallen soldiers and two Israeli civilians who crossed into Gaza, Avraham Mengistu and Hisham al-Sayyad, depends on the Palestinian prisoners released. Amos Harel of Haaretz reported on Feb. 2 that Israel has a bargaining chip of its own in its negotiations with Hamas: It holds Bilal Ruzaina, the emotionally disturbed brother of Mustafa Ruzaina, head of internal security for Hamas in the northern part of the Gaza Strip, and a proposal for a prisoner exchange on humanitarian grounds has been relayed to Hamas.

In an interview with Al-Monitor, a senior Hamas official in Gaza who requested anonymity and is involved in the prisoner issue said that the details published to date are “disinformation.” For about a year, he said, all contacts on the issue have been deadlocked, because of one condition that Hamas considers essential to any deal. “We are steadfast in our demand for the release of the 54 Shalit deal detainees. Without that, there is nothing to talk about and no way to proceed,” the official declared. The detainees were released as part of the 2011 exchange for the IDF soldier Gilad Shalit but rearrested after the abduction and murder of three Israeli teens in the Etzion settlement bloc in 2014.

He said that all rumors and leaks surrounding a prisoner exchange on humanitarian grounds or proposals to ease the closure of Gaza were intended to hide the real essence of the talks. He also claimed that Israel is trying to conceal this information from the Israeli public, including the families of the fallen soldiers and the detained civilians, so that it can blame Hamas for the failure of the talks to this point.

The same source said that the logic behind the demand is that Hamas wants to ensure that if one deal or other is reached, and Palestinian prisoners are released from prison, “Israel will not be able to launch a raid and arrest them again … and in so doing, erase the movement's achievement. I am telling you this in no uncertain terms, without being vague or coming up with excuses. If Israel accepts our precondition and releases everyone it arrested illegally, counter to the agreement we reached regarding the release of Gilad Shalit, we can then enter into sensible negotiations.”

According to the Hamas official, Israel told the various intermediaries between the parties that following a “small” deal in which Mengistu and Sayyad are released, Israel would then be willing to proceed to a second stage, in which Palestinian prisoners are released, the bodies of the Israeli soldiers are returned, and a significant easing of the closure is implemented. He explained, “Israel told us, ‘We are only prepared to release the Shalit deal detainees as part of a [new] deal.’ But it makes no sense to enter into new discussions about prisoners who were already released [in the past]. That is unacceptable, not only to the senior leadership of Hamas, but also to the Palestinian public in Gaza and the West Bank, who would consider that an act of surrender to Israel. If Israel releases the prisoners who were already released once, we will be able to enter into talks about a deal in which the [civilian and military] prisoners are released.”

In a conversation with Al-Monitor, another senior Hamas source who also requested anonymity and is identified with the movement's more hawkish wing in Gaza, said that in an effort to force Hamas to agree to its terms, Israel is trying to make things difficult for Hamas and for Gaza residents and is making conditions more difficult for prisoners held by Israel. He added that these moves, which are being kept from the Israeli public, are what exacerbated tensions last week.

The source emphasized that the tensions, which almost led to another military clash with Israel, are in no way connected to the internal election now underway in the Hamas movement or Hamas' effort at reconciliation with Egypt. “Israel knows that all the major Palestinian factions are committed to a cease-fire, but there are still people who want to interfere with the current situation and bring the two sides into conflict. Israel is jumping on this and making a big mess, for us and for itself,” he said.

As for reconciliation between Hamas and Egypt, the same source said, “There are things they [the Egyptians] don't like about Hamas, but they eventually reached the conclusion that in their conflict with Hamas, they come out the losers. Now they want to turn over a new leaf.” He remarked that the Egyptian leadership has received reports that the Palestinians in Gaza are furious with Egypt and blame it for the deteriorating humanitarian situation in Gaza. “They [the Egyptians] also realize that if they want to resolve the [Islamic terror] problem in the Sinai, they must first reconcile with Hamas.”