Israel passes ball of prisoner exchange deal back to Hamas

On the back of the coronavirus crisis, Israel is now examining a three-phased plan proposed indirectly by Hamas for the exchange of prisoners. 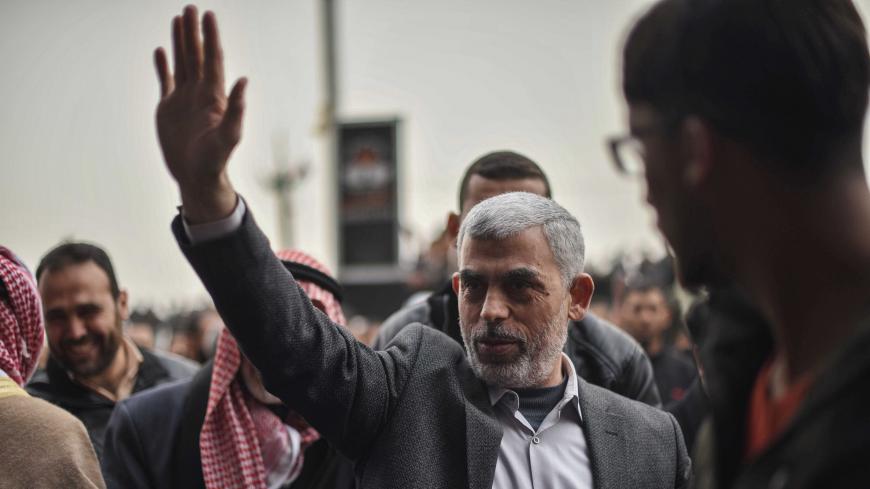 An unusual statement from Prime Minister Benjamin Netanyahu’s office on April 7 said that Coordinator for Captives and Missing Persons Yaron Blum and his team are “committed to acting constructively with the aim of bringing back the soldiers’ bodies and missing civilians and putting an end to the issue," adding that the premier was calling “for immediate dialogue between mediators” to facilitate a deal with Hamas.

What made this statement so extraordinary is that it was issued so publicly. In most cases, calls for talks of this sort are made clandestinely, through middlemen. This was not just intended to save time, even if Egypt, which normally acts as mediator, is busy dealing with its own coronavirus crisis. It was also intended to send a direct message to a different target audience.

The unusual Israeli statement was apparently instigated by an April 2 announcement made by Hamas leader in Gaza Yahya Sinwar who spoke on the digital platform of Hamas TV. Addressing Defense Minister Naftali Bennett directly, Sinwar threatened military escalation, if there are not enough ventilators for coronavirus patients in the Gaza Strip. But Sinwar also added, "We are ready to make partial concessions on our prisoners' issue in exchange for the Israeli release of elderly prisoners, patients and prisoners as a humanitarian gesture in light of the coronavirus crisis."

Israel knows that Sinwar wants to send a message to the thousands of Palestinian prisoners held in Israeli jails that his movement has not forgotten them and that it will not forsake them, especially now, during the pandemic. That is why Hamas has signaled it is eager to conduct these negotiations openly and publicly.

Israel responded publicly with a message for the families of its missing soldiers and captive civilians in Gaza that it is not ignoring any signals from Hamas.

But Israel also has another reason for responding so publicly. This unusual statement from the prime minister’s office was also intended to caution Hamas and Palestinian prisoners alike that there are still red lines for any deal that might be made. It will be a humanitarian deal, and not some new Shalit deal, with the release of hundreds of prisoners with blood on their hands.

Sinwar’s April 2 announcement was carefully studied in Israel. Assessments made at the prime minister’s office, the National Security Council, Military Intelligence and the Shin Bet attempted to discern what lay behind Sinwar’s remarks. They wanted to know how serious he is and what he meant by calling this “a humanitarian gesture in light of the coronavirus crisis.” Was he talking about the deal as a whole, or only about some first stage necessary to enter into negotiations?

Only after it was concluded that this began as a personal initiative by Sinwar, and that only later did the entire Hamas leadership come on board with it, was it decided to answer openly. The public discussion was also intended to apply pressure to Hamas by saying that if it is really concerned that its prisoners held by Israel would be infected with the virus that causes COVID-19 and if it is making efforts to obtain humanitarian aid to fight the spread of the pandemic in the Gaza Strip, it should get off its high horse and show some flexibility.

The full picture became clearer after Israel’s April 7 statement. What Hamas was suggesting was a deal in three stages. In the first stage, Israel would release women, the elderly and infirm prisoners, as well as what Hamas defines as “children” (young people up to 21 years of age), in exchange for which Hamas would provide information about Israelis held in Gaza and the missing soldiers. The question for Israel is whether this kind of information would justify the release of prisoners. The second stage would consist of the release of the two civilians held by Hamas — Avera Avraham Mengistu and Hisham al-Sayyad. The third and most complex stage would be the return of the bodies of fallen Israeli soldiers Hadar Goldin and Oron Shaul.

This three-phased plan poses a dilemma for Israel. Ever since the 2014 Operation Protective Edge, Israel has claimed that the two soldiers are no longer alive, and that Hamas is using their bodies as bargaining chips. As for the two civilians, Mengistu and Sayyad, Israel has no doubt that they are still alive. Over the years, Hamas has understood from Israel that it would not release prisoners who committed serious crimes in exchange for these two prisoners. While this was never said publicly, the two civilians crossed into Gaza of their own volition, perhaps on the background of mental illness. Therefore, Israel could not justify exchanging them for terrorists. If Hamas really does want a deal for them, it would receive Palestinians held for crossing the border into Israel illegally, or infirm and ailing prisoners, or prisoners whose sentences are almost over.

On the other hand, releasing prisoners as a “humanitarian gesture” lays the groundwork for the next stage: the return of fallen soldiers Shaul and Goldin for a proper burial in Israel. Israel would then be keeping its promise to do everything in its power to bring its fallen soldiers to rest. Apparently, this supreme value can only be achieved through dialogue and humanitarian gestures.

The crux of the problem are the deal’s three phases. Israel sent a message for Egypt to relay to Hamas that it would not be willing to reach a deal with its eyes closed. In other words, it will not give Sinwar everything he wants, when he is still able to raise the price at any next stage. If Hamas really wants a deal in stages, all these stages should be apparent before a single prisoner is released. More so, Israel made it clear that the release of information is needed not as a stage of a deal, but as a way of confirming that there is really something to talk about. This is where Israel passes the ball back to Hamas.

Israel can only do any of this once it clarifies why the Hamas leadership is trying to promote a deal now. Is it because it is concerned that members of the movement in Israeli prisons will be infected with the coronavirus? Does Hamas want the deal to include Israeli aid to stop the spread of the virus in the Gaza Strip? Or does Hamas see this pandemic as a once-in-a-lifetime opportunity to step back from the unreasonable conditions it set in the past? Could it then tell its supporters in Gaza that this is an emergency situation that requires flexibility?

It seems as if all of these reasons are valid. However, a high-level security source told Al-Monitor on condition of anonymity that another reason is that the Hamas leadership has reached the conclusion that the COVID-19 crisis has changed and will continue to change the world order. The global economic crisis will inevitably impact Gaza. It could, in fact, lead to its collapse. It is unknown how long Qatar is willing to fund the organization and transfer millions of dollars to it every month. Even more importantly, it is unclear what kind of impact the pandemic will have on Iran — another patron of Hamas — which has been hit hard by the pandemic.

Given all of that, advancing a deal with Israel could be the first stage in a new Hamas strategy. Threats of jihad, an escalation of violence and rocket fire into Israel will only make the humanitarian situation in the Gaza Strip worse. It would be better to adopt real change while preparing for the grim reality threatening Gaza. After all, Gaza stands to be hit worse than just about any other place in the world. Not only does Gaza lack manufacturing abilities, it is also under closure and facing economic collapse. In the new world, threatening Israel with rockets will not solve Gaza’s problems. Hamas would be better off searching for reasonable solutions in response to an emergency situation. And it is up to Hamas itself to adapt itself to that new reality.

The really big question is whether the Hamas leadership fully understands the severity of the situation, and whether it will accept Israel’s red lines.