With Hamas concerned about a coronavirus outbreak in Gaza and Israel concerned about overcrowding in its prisons, the pandemic offers a unique opportunity to reach a prisoner exchange deal. 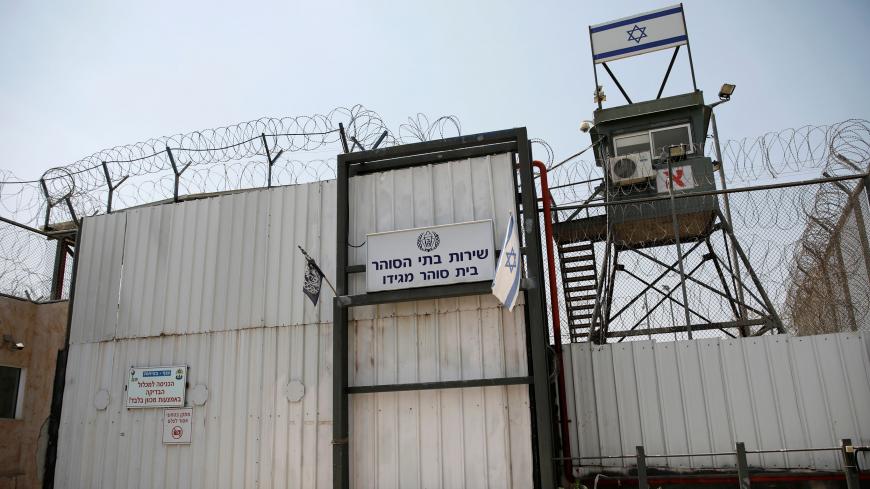 An Israeli flag is seen next to the gate of Megiddo Prison in northern Israel, July 24, 2018. - REUTERS/Amir Cohen

Israel and Hamas seemed closer than ever these past few days to reaching a deal on a prisoner exchange. Hamas' leadership in Gaza has repeated to the media over the past two weeks that they currently have a rare “opportunity” to reach this long-anticipated deal, and Lebanon’s Al-Akhbar newspaper, which is believed to have close ties to Hamas, has been reporting that a prisoner exchange mediated by Egypt is increasingly likely.

What seems to be propelling the idea forward is the coronavirus pandemic. This crisis has provided both Israel and Hamas with greater room for public flexibility on precisely those issues that have prevented any progress on a prisoner exchange in the past.

For some time now, Hamas has insisted that it would not agree to discuss any prisoner exchange before Israel releases the Palestinian prisoners who were released in the 2011 Gilad Shalit deal and then later re-arrested by Israel for alleged involvement in terrorism. Hamas contends that these prisoners must be released as a prerequisite for any talks about a new deal. Israeli security forces rejected the idea out of hand in the past, and the idea hit a dead end. Then the coronavirus appeared, and Hamas seemed willing to relax its insistence on this precondition.

In order to obscure the notion that it is stepping back from its original terms, Hamas has been refusing to refer to the purpose of the current communications as a “prisoner exchange deal.” Instead, it prefers to call this a “humanitarian initiative” brought on by the coronavirus. A list of 250 prisoners that Hamas relayed to Israel for immediate release includes mainly infirm and elderly prisoners, as well as women and young prisoners. In exchange, it is willing to provide information about Israelis held by the organization in the Gaza Strip. They are referring to civilians Avera Avraham Mengistu and Hisham al-Sayyad and the bodies of fallen soldiers Oron Shaul and Hadar Goldin, who were killed during Operation Protective Edge in 2014.

There is another component to any potential agreement. Hamas wants to expand its cooperation with Israel to head off a potential outbreak of the coronavirus in the Gaza Strip. As of now, there are just a handful of confirmed cases in Gaza. But given overcrowding and inadequate sanitation, the potential for an outbreak there is especially high. According to some reports, Hamas is hoping to obtain ventilators and other essential medical equipment as part of any prisoner deal.

Israel is also ripe for a deal. As far as it is concerned, the very fact that Hamas is no longer insisting on the release of those prisoners released during the Shalit deal only to be arrested again is a sign of progress. Furthermore, Israel realizes that the cost of a deal now would be significantly lower than any previous proposals.

And of course, Israel is concerned about the possibility of a coronavirus outbreak in its prisons. Israeli prisons are said to have some of the worst overcrowding anywhere in the West. Until only recently, prison density stood at less than 3 square meters per prisoner. This is compounded by poor sanitary conditions and the number of prisoners classified as high risk. Most prisoners smoke, and all prisoners are passive smokers at the very least. The combination of the coronavirus pandemic, overcrowding, poor sanitary conditions and a high-risk population could be catastrophic.

A Supreme Court 2019 ruling determined that the State is obligated to provide minimum living space in its prisons amounting to 4.5 square meters per prisoner and must include space for a bed, shower and lavatory. For a long time, it seemed as if little was being done to implement the ruling. Then the coronavirus erupted on the scene, and the risk was suddenly much greater than simply failing to meet the Supreme Court’s conditions.

Israel’s greatest fear is that the spread of the coronavirus in its security prisons could lead to international pressure to release prisoners and even to an escalation of tensions with the West Bank and the Gaza Strip. “At the Prison Service, we are doing everything we can to prevent the virus from infiltrating the prison. This includes changes to the staff's routine activities, information for prisoners and isolation for prisoners suspected of being infected with COVID-19,” Deputy Warden Regev Dahrug, who heads the Department of Prisoners at the Prison Service, tells Al-Monitor. “On one hand, prisons are relatively protected space. On the other hand, once the virus infiltrates a prison wing, it will be very hard to prevent it from spreading,” Dahrug adds.

Dahrug admits that the pandemic has underscored the urgency of increasing prisoners’ personal space. “Overcrowding poses a real potential for infection. We are constantly striving to expand the allotted space per prisoner. Last April, we managed to increase it to 3 square meters per prisoner, and we are now working to increase it to 4.5 square meters, in keeping with the Supreme Court ruling. As of now, 44% of all prisoners receive that,” he says, adding that the current situation, coupled with overcrowded conditions, has increased tension in the prisons. "The fact that there are no more court dates or visits with family, and of course, the uncertainty facing everyone, puts stress on the entire system," Dahrug says.

Israel has a clear interest in reducing its prison population — especially now. The release of several hundred prisoners would immediately increase the personal living space of the remaining prisoners. Israel would benefit from this in two ways: It would reduce some of the pressure in the prisons, and it may make it possible to reach a deal with Hamas under the best possible conditions to date. One thing is certain: This window of opportunity is open for a limited time only. An end to the COVID-19 crisis in the region would reduce the chances of reaching a deal.