Hamas has recently announced its readiness to make concessions in the prisoner swap deal with Israel, pushing mediators to communicate and reactivate the dossier that has been on hold for the past five years. 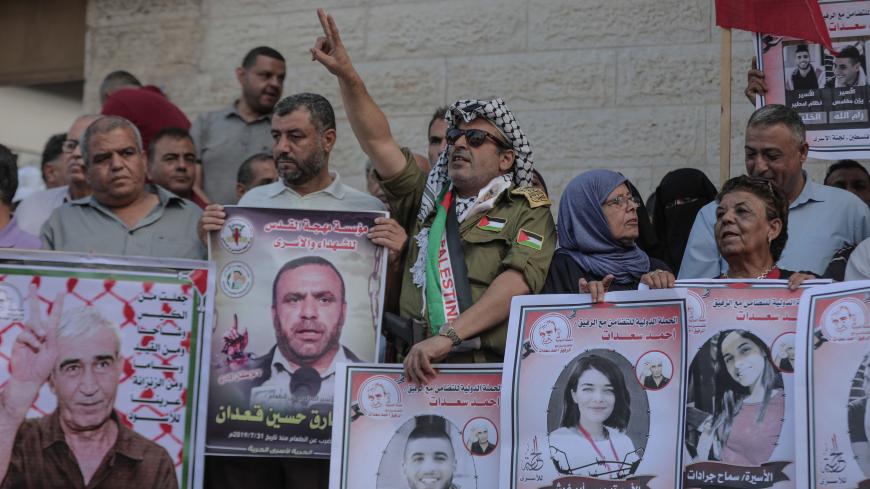 GAZA CITY, Gaza Strip — Hamas leader in the Gaza Strip Yahya Sinwar's expression of his movement’s readiness to hold prisoner-exchange negotiations has stirred mixed reactions in Israel. Shortly after Sinwar’s announcement and far from the media spotlight, Russian and Egyptian mediators siezed the opportunity to move forward a file that has been on hold for more than five years.

In a televised interview with the Hamas-affiliated Al-Aqsa channel on April 3, Sinwar expressed Hamas’ willingness to make partial concessions to Israel regarding a deal to release Palestinian prisoners from Israeli jails, specifically the elderly, the sick, children and women.

He added, “However, Israel should pay the highest price in this prisoner-exchange deal.”

On April 7, as soon as Israel received Sinwar’s surprise announcement, Israeli Prime Minister Benjamin Netanyahu stated that Israel’s Coordinator for Captives and Missing Persons Yaron Blum and his team, in collaboration with the National Security Council and the defense establishment, are “committed to acting constructively with the aim of bringing back the soldiers’ bodies and missing civilians and putting an end to the issue.” He called for “immediate dialogue between mediators.”

Hamas detained two Israeli soldiers during the 2014 Israeli war on Gaza and has refused to disclose their fate. Israel claims the two soldiers were killed in battle, while Hamas claims they are alive. In 2015, Hamas announced the arrest of two Israelis in the Gaza Strip.

Negotiations on a prisoner exchange have been on hold since the end of the 2014 war. Hamas had insisted on Israel releasing the Palestinian detainees who had been previously released as part of the Gilad Shalit deal in 2011 but were subsequently re-arrested before the 2014 war.

The detainees released a statement April 11 calling on Hamas to demand their release before undertaking any prisoner-swap negotiations. They voiced resentment of Hamas’ previous refusal to consider making any concessions.

Moussa Doudin, the Hamas official in charge of prisoner issues, told Al-Monitor that Hamas has received calls from several mediators who were pushing for negotiations such as Germany, Qatar, Turkey and Egypt.

Doudin noted that the mediators requested explanations about Sinwar’s overture. He explained that Hamas is waiting for Israel to take action to begin the actual negotiations.

Doudin said that the move is humanitarian in light of the spread of the coronavirus pandemic in Israel. He declined to share any steps that Hamas might take and underlined that the movement is waiting for a serious step from Israel before revealing its own.

In the past few years, Hamas has released videos of the alleged Israeli captives to impel the families of Israeli detainees to pressure the Israeli government to start negotiations. These efforts have failed.

Soon after Sinwar made his announcement, the Lebanese Al-Akhbar newspaper revealed April 9 that the Egyptian intelligence service had made calls to both sides.

An Egyptian member of parliament close to Egyptian intelligence told Al-Monitor on condition of anonymity that the Egyptians took action after Netanyahu’s office announced the negotiation team’s readiness to engage in serious talks through mediators. He noted that the current situation in Israel and the region, with the coronavirus pandemic, might move things forward.

The source added that Egypt is interested in a prisoner exchange because it is convinced that the negotiation process would resolve many disputes between Israel and Hamas and and contribute toward ending the blockade on the Gaza Strip. He expects more action from Egyptian intelligence in the coming days.

In an April 10 op-ed, Haaretz called on Netanyahu to take Sinwar’s overture seriously. The newspaper asked Netanyahu to adopt a humanitarian stance.

Alaa Rimawi, director of Al-Quds Center for Israeli and Palestinian Studies in Ramallah, expects the prisoner exchange file to advance in the coming months, citing both parties’ desire to settle it. Both will likely capitalize on the humanitarian aspect, given the coronavirus pandemic, which might make concessions more palatable to their populations, Rimawi told Al-Monitor.

Iyad al-Qarra, political analyst and writer at the Hamas-affiliated Felesteen newspaper, told Al-Monitor that Sinwar’s overture relieved mediators, who immediately began making calls to end the stagnation that has gripped this issue for years.

Both sides stand to make significant steps toward a successful prisoner exchange, though they still have a long way to go before finalizing a deal.