Egypt is making efforts in sealing an exchange deal between Israel and Hamas, yet observers question whether Hamas will accept it given the strained ties between the movement and Cairo. 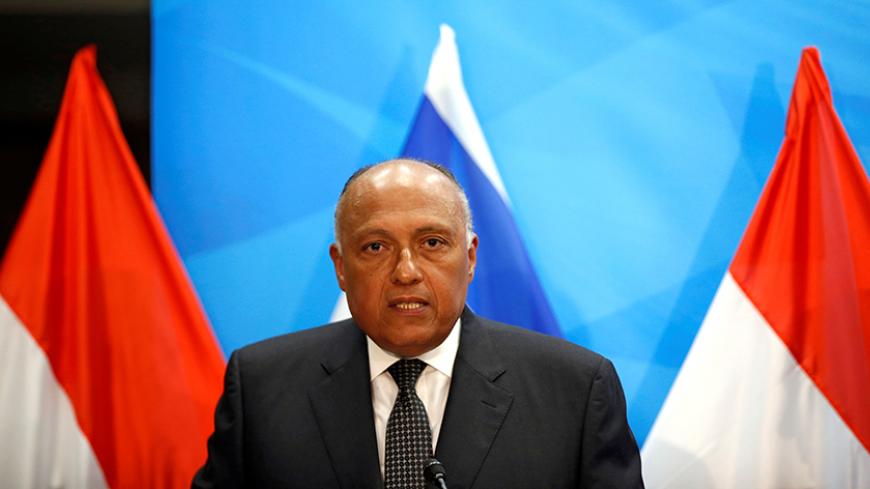 GAZA CITY, Gaza Strip — Israeli Prime Minister Benjamin Netanyahu held a dinner party on July 10 in Jerusalem to honor Egypt’s Foreign Minister Sameh Shoukry, who had come to Israel in a first visit of its kind since 2007. Shoukry accepted Netanyahu’s demand for help from Egypt to return the Israeli missing soldiers held by Hamas in the Gaza Strip, according to a July 11 article posted on the website of the Hebrew-language Channel Arabil.

But with the deteriorating bilateral relations between Egypt and Hamas due to the latter’s ties with the Muslim Brotherhood, some questions are perplexing observers. How can Hamas count on Egypt to be a mediator between the movement and Israel? Can the current Egyptian regime help Israel retrieve its missing people? Which is the alternative state for Egypt that could play the role of mediator between Hamas and Israel to conclude a new prisoner exchange deal?

Izz ad-Din al-Qassam Brigades, Hamas’ military wing, posted on April 1 photos of four Israelis who it is reportedly detaining, including photos of soldiers Shaul Aaron and Hadar Goldin. While Hamas has claimed they were taken captive during the last Israeli war on Gaza, Israel maintains that both were killed in battle and Hamas is holding their remains.

To even consider a new exchange deal, Hamas first wants Israel to free the Palestinian detainees that it had rearrested after their release as part of the Gilad Shalit exchange deal in October 2011. Hamas leader Mahmoud al-Zahar addressed Israel during Hamas’ celebration of its 28th anniversary in Gaza on Dec. 14, 2015, saying, “You must free the detainees who were released as part of the Gilad Shalit deal. We will not speak another word about this issue unless they are released and unless you vow that this will never happen again.”

Hamas is keeping mum about the issue. When Al-Monitor tried to talk to some of its leaders, they avoided the topic. Only one official agreed to give some details, on condition of anonymity.

He told Al-Monitor, “Hamas does not want to discuss any new exchange deal before Israel releases 50 Palestinians that it rearrested after freeing them as per the 2011 Gilad Shalit deal. Hamas has transmitted this message to Egypt, considering the latter was the mediator in the Shalit deal.”

He said that Hamas is afraid of Egypt’s brokerage of any potential deal with Israel, under the current Egyptian regime, as Hamas and Egypt have not been on good terms; Egypt accuses Hamas of raiding Egyptian prisons at the same time as the outbreak of the January 25 Revolution against former President Hosni Mubarak and of offering logistics support for the perpetrator of the blast of the Dakahlia Security Directorate at the end of December 2013. Hamas denies these allegations.

He added, “Clearly, the current Egyptian mediation is not strong enough, as Israel rearrested the Palestinians it had released. Besides, Israel is constantly breaching the Egyptian-brokered truce agreement with the Palestinian resistance, which put an end to the last war on Gaza. For instance, Israel is targeting farmers in the east of Gaza and fishermen off the Gaza coast almost daily.”

The official said, “Egypt is not lifting a finger to stop these breaches and it has not forced Israel to commit to the Gilad Shalit deal or to the truce. For that reason we have our doubts about whether to accept Egypt’s brokerage in a potential deal.”

Political science professor at the Islamic University in Gaza Walid al-Mudallal said that Egypt is not currently Hamas’ favorite mediator due to its policies against the movement. For instance, Hamas was left alone to face Israel’s breaches of the Gilad Shalit deal, not to mention that Egypt accused Hamas of assassinating Egyptian public prosecutor Hisham Barakat on June 29, 2015.

Mudallal told Al-Monitor, “Hamas needs a mediator to help it conclude a new huge exchange deal, as it has four Israelis in detention. Therefore, it wants a deal that is more widescale compared to the one in the past [Gilad Shalit deal], which saw the release of more than 1,000 detainees in exchange for Israeli soldier Gilad Shalit.”

He said, “I think the most suitable country to play a role here is Turkey, rather than Egypt. Turkey enjoys special relations with Hamas and has the approval of Israel, especially in the wake of the June 27 reconciliation agreement between Israel and Turkey.”

Mukhaimer Abu Saada, a political science professor at Al-Azhar University in Gaza, agreed with Mudallal that Turkey could play a role Hamas welcomes more; however, he did not rule out Egypt’s possible brokerage.

Abu Saada told Al-Monitor, “Hamas should improve its relations with Egypt. For that reason the latter might accept to play the mediator, but the movement wants Egypt to force Israel to abide by the Gilad Shalit deal. I think Hamas needs to feel that Egypt is handling its responsibility as mediator in the past deal before accepting its mediation in a new deal.”

However, for his part, political analyst Talal Awkal believes Egypt is the best country to play the role of mediator between Hamas and Israel due to the geographic proximity between the Gaza Strip and Egypt. Besides, Egypt is among the key Arab countries that played a pivotal role throughout history in the Israeli-Palestinian conflict. This role first started with the participation of Egypt in the Arab war against Israel in 1948, followed by Egypt’s control of the Gaza Strip (1949-1967) and then its participation in the war against Israel in 1967. Egypt also made efforts to resume peace talks between the Palestinian Authority and Israel. Egyptian President Abdel Fattah al-Sisi suggested in May reuniting Palestinian President Mahmoud Abbas and Netanyahu in Cairo to resume the negotiations.

Awkal told Al-Monitor, “Egypt is a strong mediator for both parties. It is close to Palestinians and Israelis alike. Israel wants to maintain strong relations with Egypt as part of its openness policy to neighboring Arab nations. Hamas wants Egypt to offer some facilitations in dealing with the Rafah crossing, and it also wants to improve relations with the latter. Moreover, Hamas will accept Egypt’s brokerage to avoid its wrath.”

He said that Egypt has strong cards it can play against Hamas to force it to accept a deal to release the Israeli soldiers. Egypt can tighten measures on closing the Rafah crossing, for instance. He added, however, that “Hamas will not cave in to such pressure. It has real goals to fulfill by detaining the Israeli soldiers: Hamas wants to release Palestinian detainees, and it cannot give up this condition because this release will increase its popularity by far.”

Although Hamas has its doubts about accepting Egypt’s brokerage in any potential exchange deal with Israel, it might have to welcome this brokerage ultimately, in the hope of improving relations between the movement and Egypt and facilitating opening the Rafah crossing for Palestinians.