Islamic Supreme Council of Iraq at risk of fragmentation

A number of prominent leaders of the Islamic Supreme Council of Iraq withdrew from the council that has put the political future of the party at risk. 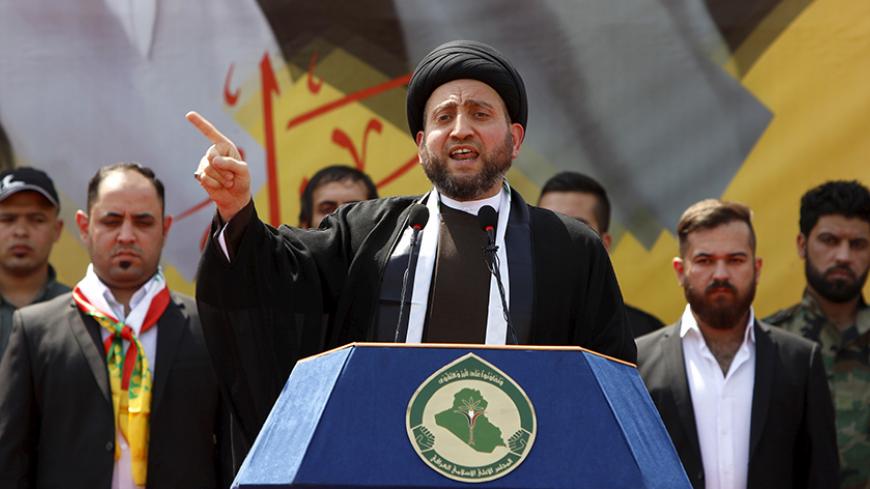 Ammar al-Hakim, leader of the Islamic Supreme Council of Iraq, gives a speech April 8, 2016, in Baghdad during a ceremony to commemorate his uncle, cleric Mohammed Baqir al-Hakim, who was assassinated in Najaf in 2003. - REUTERS/Ahmed Saad

Noteworthy is that these three leaders are the most prominent in the ISCI and helped establish it after it was founded in Iran by Muhammad Baqir al-Hakim in the 1980s. This show that things have been changing within the ISCI under its current leader Ammar al-Hakim, who initiated a new vision about a year ago to pump young blood into the ISCI.

ISCI members refrained from talking to the media about the recent withdrawals. But Saghir told Al-Monitor that for about a year now, he has been consulting religious authorities in Najaf and taking their opinions into account, noting that he took the decision some time ago but he did not announce it in light of the political attacks that targeted him following his February 2016 speech about austerity. The speech, which he claims was cut and edited, went viral and became known as the “Nestle issue” after he called on Iraqis not to eat chocolate bars — known by the generic term "nestle" among Iraqis — to save money. Thus he decided to wait and not be hasty in taking a decision under pressure from the parties that attacked him.

Saghir refused to go into details about the reasons why he withdrew from the ISCI but said, “We noticed that the ISCI was no longer abiding by the methods of Shahid al-Mouhareb [Muhammad Baqir al-Hakim] and Aziz al-Iraq [Abdul-Aziz al-Hakim]. We are no longer able to keep up with the new approach, which is completely different from ISCI’s original method and foundation. Our decision stems from a clear doctrinal stance and there is no going back. Many important figures withdrew from the ISCI and others will follow.”

Speaking about his next step, Saghir said, “It is too early to think about forming a new political bloc. We are waiting for the formation of a new electoral commission and the enactment of a fair electoral law to see how the political situation plays out.”

He added, “If we cannot get rid of the partisan spirit, which has deprived some competent Iraqis from their right to equal opportunities, it would be better to dismiss the idea entirely. The ISCI is currently recycling failure and disappointment in new forms.”

A source close to the ISCI leadership told Al-Monitor on condition of anonymity, “Many senior leaders were not pleased with Hakim’s intentions to bring in young people and isolate veteran leaders, which led to many internal divisions.”

The source added, “Veteran leaders represented by Abdul-Mahdi, Zubaidi and Saghir have objected over the last few years to involving new, young members in making important decisions and marginalizing the party's founding leaders. Hakim tried to patch things up but the coming elections and the start of the registration at the Independent High Electoral Commission prompted some of the leaders to immediately withdraw from the ISCI.”

Indeed, the first thing to raise the ire of first-rank leaders was the formation of the so-called Knights of Hope Gathering, a group of young people to which Zubaidi publicly objected.

On Jan. 22, Zubaidi said in a press interview, “There is a big disagreement within the ISCI leadership in regard to the political situation — how to manage the affairs of the party, the decision-making process and how to allocate tasks to leaders.”

Thus, an important question arose: How will these major withdrawals or defections affect a party the size of the ISCI, headed by Hakim, the leader of the ruling National Alliance that holds 29 seats in the Iraqi parliament, especially since Zubaidi was a proven vote-getter in the 2014 elections?

In this context, Ghaleb Shabandar, an expert on Islamist parties and former member of the Dawa Party, which was previously under the ISCI’s umbrella, told Al-Monitor, “The ISCI is not popular and it is unable to mobilize a proper demonstration. The leaders who left the ISCI were the ones who guaranteed the thousands of votes. This is why the real damage will be evident in the upcoming elections.”

He said, “Saghir, Zubaidi, Abdul-Mahdi and others withdrew after the ISCI abandoned the democratic method of decision-making and put dozens of young and incompetent leaders in charge.”

Shabandar added, “It is likely for Abdul-Mahdi and Zubaidi to form new, nonreligious parties to keep up with the popular demands in the city, while Saghir is more likely to approach religious authority and remain in the Islamic current.”

In fact, Saghir is already leading the Ansar al-Aqeeda faction affiliated with the Popular Mobilization Units, which could be the nucleus of a new Islamic party. Zubaidi's intention is to establish a new political party, while Abdul-Mahdi has so far remained silent in this regard. Everything will come to light when the date for the next elections is set. The ballot box will also determine the impact of the three leaders’ absence from the ISCI and its future in the political process.