Dahlan muscles his way into Gaza with UAE money

A reconciliation effort between Hamas and estranged Fatah leader Mohammed Dahlan could resolve the bad blood among Palestinians resulting from the 2007 infighting between Fatah and Hamas. 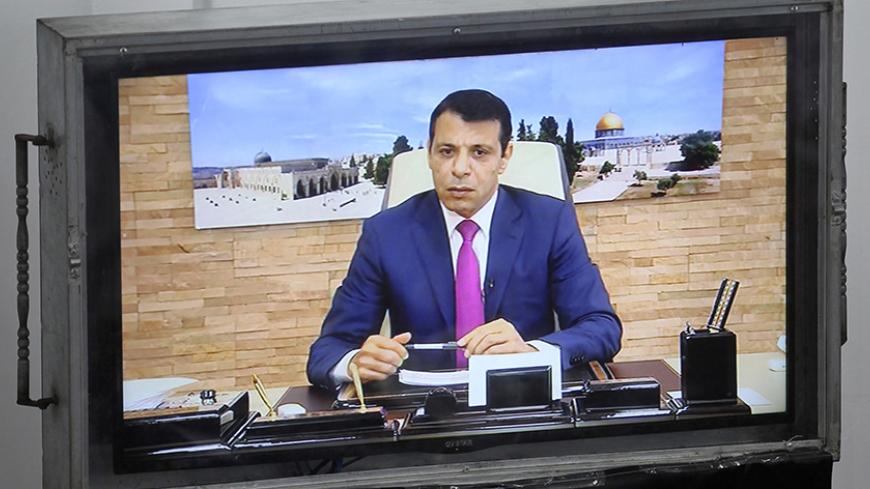 There has been a lot of talk lately about the possibility of a “social reconciliation” to bring to a close the societal ruptures caused by the 2007 killings stemming from Hamas and Fatah's battle for control over Gaza. The idea was a focal point of Egyptian-brokered agreements concluded in June between Hamas and dismissed senior Fatah member Mohammed Dahlan. The reconciliation would involve compensation being paid to those injured and the families of those killed.

Dahlan spoke about his reconciliation with Hamas on July 27 from the United Arab Emirates via a video conference during a meeting of Hamas Palestinian Legislative Council (PLC) members and PLC members loyal to Dahlan. He said that the consultations to reach understandings between him and Hamas will return hope to the people of Gaza and alleviate some of their suffering, claiming they have already begun to bear fruit. A source close to Dahlan, speaking on the condition of anonymity, confirmed to Al-Monitor that by “fruit” Dahlan was referring to a social reconciliation.

A social rapprochement, should it transpire, would definitively conclude this bloody chapter of the Palestinian conflict, during which hundreds were killed June 10-15, 2007, in violent clashes between Fatah and Hamas militants. That event — which Fatah characterizes as a coup and Hamas describes as a decisive military action — has been an open wound.

Ismail Radwan, Hamas' current representative to the Social Reconciliation Committee, told Al-Monitor, “Hamas sees that bereaved families have been very responsive [to the efforts] to bring about reconciliation and restore national unity. They have been a great example of forgiveness. The movement [wants] a broad national reconciliation in the upcoming period and has the desire and determination to close this dossier once and for all. The committee will embark on turning the page on the dossier related to victims’ compensation in the upcoming days.”

The Social Reconciliation Committee was established following the Fatah-Hamas reconciliation agreement of 2011, with all the Palestinian factions taking part. Its activities were frozen, however, due to Hamas and Fatah's ongoing estrangement. The committee, or a version of it in Gaza, was reactivated by the Hamas-Dahlan understandings.

Al-Monitor learned from sources on the Social Reconciliation Committee that the majority of bereaved families have agreed to accept compensation and end the dispute in exchange for pardoning those who took part in the killings. A pardon would involve prisoners being released, while the families of victims will accept compensation and provide a written pledge not to seek revenge against those who killed their relatives. While some have not yet responded, no more than five have rejected the settlement so far, on the grounds that justice should be served separately from any financial compensation.

The committee will distribute compensation payments in the next few weeks, in a public presentation, once the funds arrive from the United Arab Emirates (UAE), which is underwriting the effort. After that, it will declare the end of the dispute.

Imad Mohsen, media spokesman for the Democratic Reformist Current, Dahlan's breakaway Fatah movement active in Gaza, told Al-Monitor, “In the next few weeks, the Social Reconciliation Committee will discuss the disbursement mechanism with human rights organizations, judges and tribal elders. The bereaved families, which total 700, have been very receptive. Among [those killed], we count 380 families for Fatah, 320 for Hamas and 800 injuries on both sides. A sum of $50,000 will be paid to each [deceased] victim's family, while the injured will obtain a smaller amount that is yet to be determined. The financial compensation fund now includes $50 million from the UAE.”

Omar Karout, board member of Hemaya Center for Human Rights in Gaza, told Al-Monitor, “The social reconciliation is based on family and tribal agreements and does not go against human rights principles and fair trials. The victims fell in political and factional conflicts, not in family conflicts. As a human rights institution, we are in favor of this move, as it would turn a sad page in Palestinian history, especially in Gaza.”

The Social Reconciliation Committee, which has called on the rest of the factions to join its ranks, met for the first time July 23, in Gaza, in the presence of representatives from Hamas, Islamic Jihad, Dahlan’s current, al-Saiqa, the Palestinian National Initiative, the Popular Front for the Liberation of Palestine-General Command (PFLP-GC) and the Popular Resistance Movement. Palestinian Authority President and Fatah Chairman Mahmoud Abbas said Fatah did not participate in the meeting. The committee met again July 29 to form subcommittees in the five Gaza governorates — Rafah, Khan Yunis, Deir al-Balah, Gaza and North Gaza — and chose as its chairman Khodr Habib of Islamic Jihad.

Speaking to Al-Monitor on condition of anonymity, a Fatah Central Committee member said, “The Social Reconciliation Committee’s meeting that took place in Gaza is the product of deals serving common Hamas-Dahlan interests, and is not the product of political understandings. As a national movement, Fatah is removed from [these deals] and does not recognize them. It is unacceptable to undermine the families’ rights in exchange for money entering Gaza for political purposes, in light of the Palestinians’ need for it. The deep wounds need to be healed through the judiciary, and the PA needs to be at the heart of any settlement, rather than being excluded from it.”

Mumin Bsiso, a political analyst, told Al-Monitor, “It is no secret that enmity and hatred marked Hamas-Dahlan ties prior to the 2007 split. This phase was plagued by killings, bloodshed and destruction of property. Previously, Dahlan and his supporters had accused Hamas of the killings during the split. This is while Hamas accused Dahlan and his faction of initiating a military coup against its constitutional legitimacy and of forming special teams to kill Hamas cadres, paving the way for its elimination from the political scene."

He added, “It would be naive to think that turning the page on the past will take place overnight, or that social reconciliation will manage to heal the wounds and close the dossier related to the bloodshed once and for all. The problem does not reside in both parties’ leaders and cadres, but rather in the presence of a good number of furious members of both parties. There are families of victims who refuse to forgive, demand that punishments be imposed and perceive Dahlan to be an enemy who should be faced. This makes the issue high risk and open to many possibilities.”

The case of Gaza’s bereaved families is a thorny and outstanding issue between Hamas and Fatah. Many of the victims’ families run into each other on a daily basis on Gaza streets, and there is the possibility of revenge and retaliation, although no incidents have yet been recorded. Turning the page on this issue has become a pressing problem given popular pressure. If accomplished, it will have a positive impact on the rapprochement between Hamas and Dahlan. Unless all of the bereaved families agree to accept compensation, as Hamas and Dahlan wish, reconciliation is unlikely to succeed as long as Fatah is excluded. Dahlan's speech during the PLC session in Gaza before Hamas parliament members perhaps will boost the social reconciliation effort by encouraging hesitant bereaved families to agree to compensation.