Palestinian President Mahmoud Abbas has ordered the Higher Committee for Tribal Affairs in Gaza disbanded over ties to exiled Fatah leader Mohammed Dahlan, but the group is committed to continuing its work. 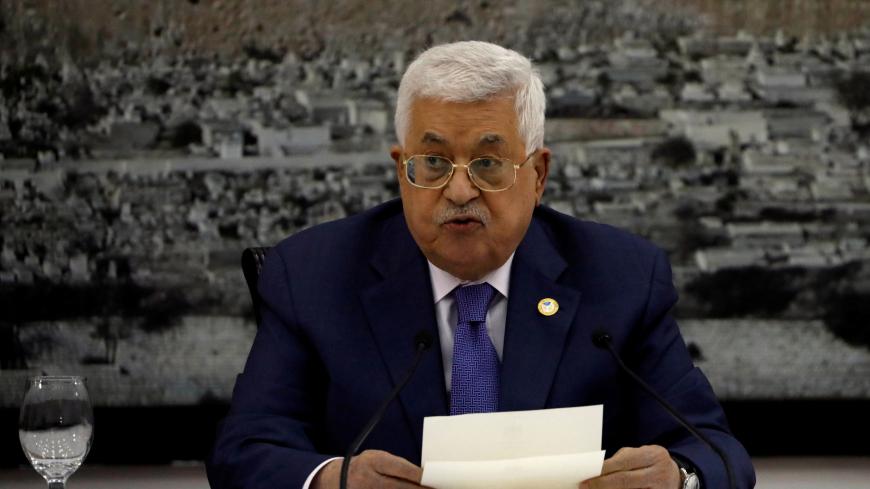 Palestinian President Mahmoud Abbas speaks during a meeting with the Palestinian leadership in Ramallah, in the Israeli-occupied West Bank, July 25, 2019. - REUTERS/Mohamad Torokman

GAZA CITY, Gaza Strip — Palestinian President Mahmoud Abbas has decided to disband the Higher Committee for Tribal Affairs in Gaza, but its leader said the group will carry on because it's never received "a dime" from his government anyway.

Abbas accuses the committee of working with Fatah’s Democratic Reformist Current, which is affiliated with his rival, dismissed Fatah leader Mohammed Dahlan. The Sept. 10 presidential decree to disband the committee will take effect once it appears in the official gazette.

Abbas established the committee in the southern provinces in 2012 to solve social problems and disputes between Palestinian families. Hussni Salman al-Mughanni, its head, recently told Al-Monitor, “We were surprised by Abbas’ decision to disband the committee. Since 2012, we have been carrying out public reforms and solving social problems.”

The committee includes 850 heads of Palestinian families distributed among 65 subcommittees tasked with conflict resolution and social reform in the Gaza Strip. Mughanni said the group handles many of the Gaza Strip's social problems, adding that Abbas always called the committee the “social weapon of the Palestine Liberation Organization.”

When asked about accusations that the committee is working with Dahlan, Mughanni said, “Dahlan is present in the Palestinian arena, and he is a Palestinian. Still, [Abbas] has no proof of our collaboration with Dahlan.”

Abbas, Mughanni said, has not allocated a budget for the committee since it was established. "[Abbas] didn't spend a dime on us, despite our calls since 2012. We are doing our job and paying out of our own pockets," he said. Mughanni stressed that committee members will continue their work in the Gaza Strip “because we are doing what we believe in.”

According to Al-Monitor's sources, the committee did not call Ramallah to object to the decision and Fatah in Gaza has issued no official stance.

Osama al-Farra, a Democratic Reformist Current leader, warned that Abbas’ decision to disband the committee might also affect the Social Reconciliation Committee, which was formed under the Cairo Agreement reached between Palestinian factions in 2011. The committee offers compensation to the families of victims killed during the 2007 fighting between Fatah and Hamas that led to the Palestinian division.

Farra told Al-Monitor that the Higher Committee for Tribal Affairs played an important role in the Social Reconciliation Committee, resolving 174 disputes involving victims' families. The tribal committee contacted the families to convince them to reconcile and pardon those who killed their relatives in return for financial compensation of $50,000.

He called the decision to disband the Higher Committee for Tribal Affairs “incomprehensible." He noted, “Instead of the committee being disbanded, its role should have been promoted.”

Abu Naser al-Kajak, the Hamas interior minister's adviser on tribal affairs and conflict resolution committees in Gaza, also rejects Abbas' decision. “We are against offending any party that takes care of the affairs of tribes and reconciliation between people.”

Kajak told Al-Monitor the decision holds an underlying political message: “[Abbas] believes he is the sole ruler. He follows this approach in all matters related to the Gaza Strip, and we find this condemnable.”

He added, “The [tribal committee] members work day and night, around the clock, and I believe this is no way to reward them." He added, however, that the decision “will have no impact, because the committee will continue its work.”

Hamas spokesperson Fawzi Barhoum said the decision to disband the Higher Committee for Tribal Affairs is harmful for Palestinian society in the Gaza Strip. Barhoum told Al-Monitor, “The decision is part of Abbas’ politics to divide the Palestinian cause to serve his personal ends at the expense of the people’s interests.”

Barhoum added, “The committee is playing a pioneering role in social reform, tribal reconciliation and addressing internal Palestinian issues. It solved major problems that official institutions failed to address. Disbanding the committee is not in the Palestinian people’s interests.”

Among its achievements, the tribal committee succeeded in ending a 20-year dispute between two major families in Gaza — the Hamdouna and Gharbawi families — in July 2017.

The Higher National Commission for the Great Return March and Breaking of the Siege reportedly asked Abbas on Sept. 10 to reconsider disbanding the committee, saying it played “a special national role in the marches of return.”