Controversy follows Turkey's president wherever he goes. Next stop: Europe. 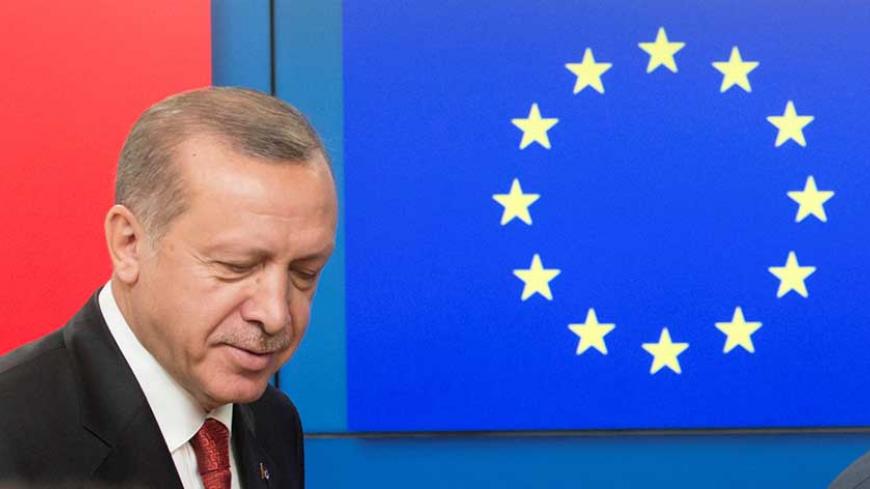 Once again, Turkey and the European Union appear destined for a head-on collision in their relations, one that looks very difficult, if not impossible, to avert.

The Foreign Affairs Committee of the European Parliament on June 20 adopted a revised, strongly worded draft of its Annual Turkey Report 2016, which angered the Turkish government. The committee showed formidable support for the report: Only three members voted against it, while 51 voted in favor and 14 abstained.

The committee emphasized that Turkey’s pending constitutional amendments granting extraordinary powers to the presidency aren't in line with the Copenhagen criteria — which are used to determine a country's eligibility to join the EU — and called on member states to formally suspend accession talks with Turkey if the changes are implemented in their current form. The amendments aren't scheduled to take full effect until after the presidential and parliamentary elections in November 2019.

In a way, the committee is asking Turkish President Recep Tayyip Erdogan to declare the April 16 referendum results null and void. This is, naturally, unacceptable for Erdogan. Even though the validity of the election and the narrow margin of victory have been widely challenged, there isn't the slightest possibility that Turkey will refrain from implementing the referendum results or make changes.

After the committee accepted the report, Kati Piri, a Dutch Social Democrat and the European Parliament rapporteur on Turkey, said, “The continuation of [Turkey's] state of emergency has disproportionate negative effects on Turkish society, and the arbitrary arrest of thousands of citizens, including parliamentarians and mayors, is of utmost concern to us. … We expect the Turkish government to take the Venice Commission recommendations seriously, as well as the fact that half the Turkish population voted against the changes in the referendum.”

Erdogan had dismissed the Venice Commission's conclusions in March, saying the commission "does not count for anything."

"You can write as many reports as you want. We do not recognize your reports. We will not recognize them in the future, either, for your information,” he said.

Turkish daily Cumhuriyet noted a nuance in the adopted text of the Foreign Affairs Committee: The earlier wording, “the accession talks should be suspended,” was changed to “should be suspended without delay,” thus hardening the European stand regarding Turkey.

Piri, in an interview with the Turkish edition of the BBC, articulated the European Parliament’s position and said that despite the proposal's strong wording, it doesn't seek to end the accession immediately. "Without delay" refers to quick action Parliament should take if the constitutional amendments are implemented at the next elections in 2019. Yet she also reiterated that as fundamental human rights and supremacy of law are constantly violated in Turkey, it is impossible to consider Turkey’s EU membership.

Although the European Parliament has no executive powers, it is more or less the EU's trend-setting institution, and its resolution on Turkey indicates the climate Turkey should expect in the near future. The resolution is certain to create additional uproar in the Turkish government.

Erdogan's trip to Germany, set for just one day after the European Parliament's vote, could accelerate the oncoming crash. Erdogan will be attending the G-20 meeting in Hamburg, and this visit will be his first to the country since he likened some of the current government's practices to Nazism, which unsurprisingly infuriated the Germans.

Erdogan, most probably, will be received with protests by certain Turkish and Kurdish groups, and the German police announced they will not allow a repetition of what happened recently in Washington, where the Turkish president’s security guards attacked peaceful demonstrators who were US citizens. Now, his security detail is wanted by US law enforcement authorities. Eyes will be focused on Erdogan and his entourage, as tensions with his German hosts undoubtedly will grow. Two German halls, in Dortmund and Oberhausen, have already rejected Erdogan's request to deliver talks to Turkish audiences during his trip.

Erdogan's visit, on top of the European Parliament's stand on Turkey’s accession to the EU, will most likely exacerbate ongoing Turkish-EU skirmishes. The dismal human rights situation and violations of basic freedoms in Turkey drive increasing concern in Europe.

Turkish opposition leader Kemal Kilicdaroglu organized a "March for Justice" from Ankara to Istanbul that began June 15. The 480-kilometer (300-mile) march is expected to take 23 days and is designed to galvanize the opposition, which is bitter over the allegedly fraudulent constitutional referendum, among other things. Thousands of opposition members could descend on Istanbul in mid-July if Erdogan allows the march to proceed. He would then likely send security forces to confront peacefully marching crowds.

Those marchers, participating in what could become the biggest public undertaking in recent Turkish politics, could very well arrive on the first anniversary of the July 15 coup attempt. The government is making preparations for mammoth demonstrations by Erdogan loyalists to commemorate “martyrs” and celebrate the "victory of democracy" — meaning the consolidation of Erdogan’s grip on power.

Imagine the turmoil that could arise if these two groups converge.

Adding to the tension are trials related to the failed coup. The main trial, in which Erdogan expected great fanfare in his favor and against alleged putschists, began to produce contrary results. Some testimony proved counterproductive for the Erdogan narrative, so the trial was postponed until Oct. 30.

However, the first trial involving prominent journalists accused of being associated with the Gulen movement, which is alleged to have instigated the coup, has begun. Many Turkish media outlets, strictly controlled by Erdogan, are muted, yet the trials aren't escaping international notice, and they add to Turkey's bleak human rights record.

The country's EU relations need a miracle. Now is the time to cross fingers, wait for July and pray that the situation doesn't get even worse.