After a public outcry, Turkey's ruling party scrapped its controversial bill pardoning child rapists who marry their victims in what could be a sign that common sense still has some sway in President Recep Tayyip Erdogan’s "New Turkey," but likely has more to do with an expected EU move to freeze Turkey's membership bid. 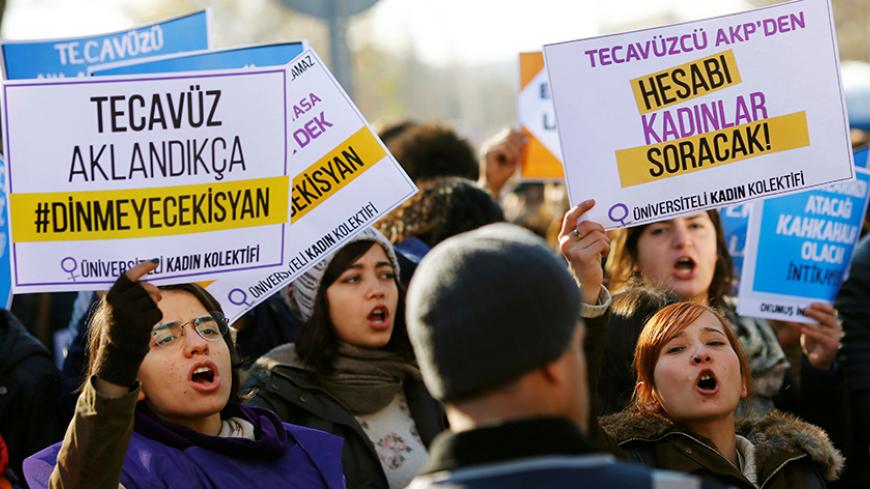 Protesters shout slogans during a demonstration against a proposal that would have allowed sentences handed out to people convicted of statutory rape to be indefinitely postponed if the perpetrator marries the victim, in Ankara, Nov. 22, 2016. - REUTERS/Umit Bektas

It seemed too good to be true: First there came the shelving of a controversial bill that would have given amnesty to child rapists who married their victims.

Then today, Nov. 23, two prominent prisoners of conscience were reported to have been cleared of terror charges, inspiring hope that they would be set free. It later emerged that the trials of novelist Asli Erdogan and translator Necmiye Alpay over purported links to the outlawed Kurdistan Workers Party will continue and that they would remain in jail.

Despite the setback, the moves have sparked speculation that domestic and external pressure still have some effect in President Recep Tayyip Erdogan’s “New Turkey.” More critically, they suggest that Erdogan himself retains his instinct for pulling back from the brink when need be.

The scrapping of the child rape measure followed a public uproar marked by days of widespread protests. Even Islamists joined the barrage of criticism of what many said would give pedophiles a free pass. Then in a surprise development, Erdogan called for further debate on the proposal just hours before the ruling Justice and Development Party (AKP) would have passed it in the parliament on Nov. 22. Turkey’s justice minister, who championed the bill, did a prompt volte-face, declaring, “The matter is closed.” The mass circulation newspaper Hurriyet cheered the news, announcing that “common sense prevailed” in front-page headlines.

The opposition publication Sozcu wryly observed that the government had not “heeded the people” but “the palace” instead, meaning Erdogan.

The affair was reminiscent of when Erdogan in 2004 sought to criminalize adultery but dropped the idea after a flurry of rebukes from the European Union. It had unfolded just as Turkey was seeking to begin talks for full membership of the bloc, which it duly did the following year. Erdogan, who was prime minister at the time, was credited for letting pragmatism prevail.

Might it have triumphed again? The shelving of the bill pardoning child rapists came shortly before the European Parliament was expected to vote to freeze talks to bring Turkey into the EU. The Nov. 24 vote by the Strasbourg-based body was to be advisory, not binding. But it would nonetheless help cement the increasingly prevalent view that Turkish EU membership is a pipe dream, with potential ill effects for Turkey’s wobbly economy.

Turkey’s accelerated descent into authoritarianism in the wake of the July coup attempt has sparked calls for the membership talks to be suspended. Kati Piri, the European Parliament’s rapporteur for Turkey who is spearheading that campaign, told the BBC, "We do not think there is enough credibility to continue the talks on EU membership under the current circumstances. We cannot go on as if nothing has happened."

Piri was referring, among other things, to the gargantuan purges that have left over 100,000 people jobless and stripped them of any right to appeal. About 36,000 have been jailed on flimsily supported charges that they partook in the coup that was allegedly masterminded by Muslim cleric Fethullah Gulen. On Nov. 22, Turkey sacked a further 15,000 state employees, including soldiers and midwives, and arrested prominent Kurdish politician Ahmet Turk.

Erdogan has responded to the European Parliament with classic defiance. He said the vote has “no value” and has threatened to hold a popular referendum on whether to ax the EU-Turkey talks. He is also talking about joining the Shanghai Cooperation Organization, the security bloc dominated by Russia, China and Central Asian countries. But most analysts dismiss such outbursts as posturing. The EU remains Turkey's top trading partner and Erdogan knows that he owes his continued popularity above all to the AKP's economic performance.

Where Piri and Erdogan agree is that the EU is brazenly hypocritical in its dealings with Turkey. It is no secret that the EU’S decision to open new negotiation chapters with Turkey just as the country is backsliding on democratic reforms was calculated to secure Ankara’s cooperation in keeping millions of Syrian and other refugees from making their way to Europe.

It is precisely such double standards that Piri and like-minded deputies in the European Parliament say they want to redress by suspending talks with Turkey. “When Turkey has become the world’s largest jail for journalists, with 10 members of parliament in prison, I cannot tell EU citizens or Turkish citizens that this is an honest process,” Piri told the leftist daily Cumhuriyet in a recent interview.