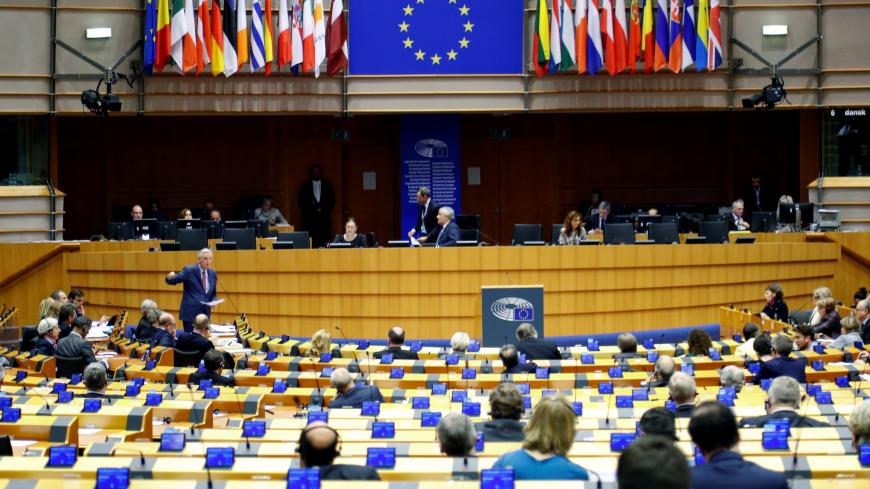 In a further blow to Turkey’s withering European aspirations, the Foreign Affairs Committee of the European Parliament told the European Commission and EU member states today to freeze accession talks with Ankara over its shoddy human rights record, partisan judiciary and ongoing territorial dispute over the divided island of Cyprus.

The call came as the committee voted on the EU Commission’s annual Turkey report, which will be taken up during a March 11 plenary session of the European Parliament. Some 47 lawmakers voted in favor and seven others against the report, which also noted the high level of corruption in Turkey.

Kati Piri, the parliament’s rapporteur on Turkey, declared in a tweet, “My expectation is that in two weeks a large majority of the EP will vote for the suspension of accession talks with Turkey.”

Dutch fellow parliamentarian Marietje Schaake said in a statement, “The message of the parliament is crystal clear. We attach consequences to [Turkish President Recep Tayyip] Erdogan’s grip on power.”

The parliament’s recommendations are not binding, as only the EU heads of state have the power to either freeze or scrap Turkey’s talks for full membership of the bloc and any such decision must be unanimous.

Such a move remains unlikely as long as Europe relies on Turkey to hold back a potential new wave of Syrian and other refugees under a controversial deal struck in March 2016. But the mood in Europe is squarely anti-Turkish and it's likely to deepen as the government continues its unabashed campaign of repression.

In June 2018, the EU’s Council of Ministers sounded the alarm, stating, “The council is especially concerned about the continuing and deeply worrying backsliding on the rule of law and on fundamental rights including the freedom of expression. The deterioration of the independence and functioning of the judiciary cannot be condoned, nor can the ongoing restrictions, detentions, imprisonments and other measures targeting journalists, academics, members of political parties including parliamentarians, human rights defenders, social media users and others exercising their fundamental rights and freedoms.”

Brussels’ call for sanctions came as Turkish prosecutors revealed they are seeking aggravated life sentences for prominent Turkish businessman and philanthropist Osman Kavala and 15 others, including actor Mehmet Ali Alabora, film director Cigdem Mater and journalist Can Dundar. They are being accused of plotting to overthrow Erdogan by orchestrating and financing the mass protests that erupted across the country in June 2013 over the government’s plans to build a shopping mall to replace a rare green space in Istanbul’s Taksim Square.

The claim prompted incredulity among rights groups. Amnesty International’s veteran Turkey researcher Andrew Gardner said, “The Gezi protests were overwhelmingly peaceful with people simply exercising their rights. They were met by arbitrary and abusive force by police. It should be the authorities’ denial of these rights and the police violence against peaceful protesters that should be examined by the courts, not these 16 civil society figures who have not committed any crime.”

Dunja Mijatovic, the Council of Europe’s commissioner for human rights, said she was “appalled” by the indictment and called the sentences “unacceptable.” Marc Pierini, a former EU ambassador to Ankara and a senior non-resident fellow at Carnegie Europe, said, “The statement by the prosecutor will only reinforce the EU governments’ perception of Turkey backsliding on rule of law and independence of the judiciary.” Pierini told Al-Monitor, “The hope that some initial improvements in the rule of law could help to start mending the EU-Turkey relationship at least on trade and economic issues is now being dashed.” He continued, “Today’s indictment, in its extreme form, is probably the worst self-engineered piece of news for Turkey’s ailing economy. A very sad development indeed.”

The Donald Trump Administration has yet to comment. Steven Cook, a senior fellow for Middle East and Africa at the Council of Foreign Relations, told Al-Monitor that it should come as no surprise. He said, “In general, the administration has demonstrated that beyond [pastor] Andrew Brunson, it doesn’t care about the predatory, punitive and politically driven justice that Turkish authorities are determined to mete out.”

Yesterday a Turkish appeals court upheld a ruling to jail 14 journalists and executives from the opposition Cumhuriyet newspaper. The court’s ruling finalizes decisions for those sentenced to under five years on thinly evidenced terror charges. Six of them, including renowned cartoonist Musa Kart, will have to return to prison to serve out their terms. Two others who fall under the same category, including Al-Monitor columnist Kadri Gursel, will not go back due to time already served. The Organization for Security and Co-operation in Europe, of which Turkey is a member, called the charges against the Cumhuriyet staff “groundless” and demanded the sentences be reversed.

Kavala, who commands respect worldwide for his contributions to refugees, the arts and reconciliation between Turks and Armenians, has been held without indictment for 477 days, a gross violation in and of itself, rights defenders say.

Some air hopes that Turkey’s Constitutional Court will take this point into consideration and strike down the lower court’s ruling on procedural grounds after an initial hearing, paving the way for Kavala and his alleged co-conspirators to be either released or remain free pending trial.

Their optimism is grounded in the court’s ruling last year that the rights of jailed writers Mehmet Altan and Sahin Alpay had been violated and that they must be let out pending their trials on terror charges.

But the Constitutional Court’s composition is shifting, with pro-Erdogan judges gradually outnumbering holdovers appointed by his pro-secular predecessors. The shift continued today as Yildiz Seferinoglu, a former lawmaker from Erdogan’s ruling Justice and Development Party (AKP), was sworn in. The court’s current president, Zuhtu Arslan, was nominated by former President Abdullah Gul, who is seen as the driving force behind the AKP’s now shelved reforms. It was those reforms that persuaded the EU to open membership talks with Turkey in 2005. Speaking at today’s ceremony, Arslan said, “Securing and sustaining the rule of law is the guarantee of a country’s future.”