As Turkey's state of emergency continues, the government has passed measures establishing a commission for grievances and reducing the period police can hold detainees without charges in what critics call a cosmetic move. 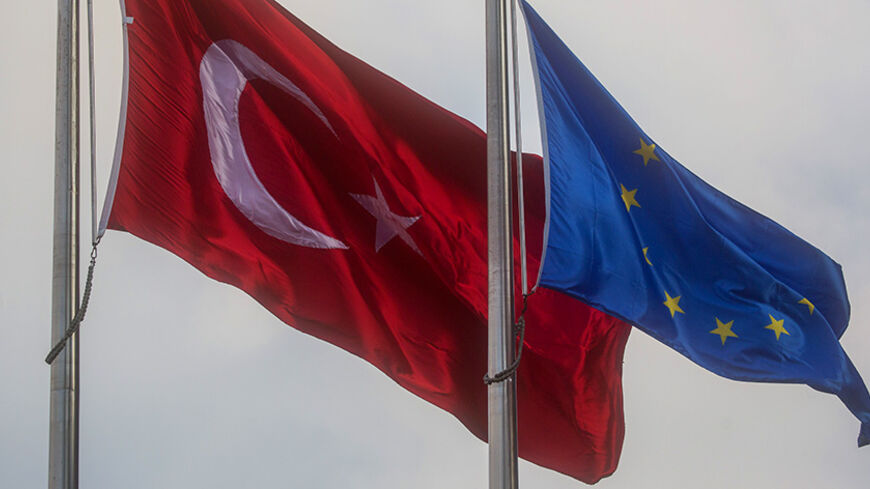 The European Union and Turkish flags are seen outside a shopping mall in Istanbul, Nov. 24, 2016. - Chris McGrath/Getty Images

In rare and hopeful sign that Turkey still cares about its fraying ties with Europe, the government has quietly passed a series of new decrees that ease detention terms under the state of emergency that has been in force since the July coup attempt.

The measures, which came into effect on Jan. 23, sharply reduce the detention period for those held without charges from a maximum of 30 days to 14 and allows immediate access to lawyers. They also call for the establishment of a commission to examine complaints arising from detentions, dismissals and closures of companies, including media outlets, under the state of emergency. Those dissatisfied with the commission’s findings will reportedly be able to appeal their cases in domestic courts.

Turkey’s Minister for European Union Affairs Omer Celik said that Turkey deserved applause from the EU “for defending democracy” against the failed putsch.

The move came hours before the Parliamentary Assembly of the Council of Europe voted on whether to debate Turkey’s status amid ever louder calls for the country to be placed on a monitoring list of members with shoddy human rights records. The debate was voted down.

Veteran columnist Murat Yetkin wrote in the English-language Turkish Daily News that the moves “could be read as an attempt by the government to prevent further severing of ties with European institutions.”

Despite the anti-Western rhetoric in government circles, he added, “The government’s official policy remains sticking with the West at present.”

Kati Piri, Turkey rapporteur for the European Parliament and a vocal critic of Turkey’s rapidly deteriorating rights record, told Al-Monitor, “The new decrees are hopefully the first step toward normalization and restoring the rule of law. Abolishing the denial of access to a lawyer during the first five days under custody is crucial, as the current situation was enabling ill-treatment of prisoners.”

Still, Piri said far more needs to be done to improve the situation of detainees, including granting access for independent monitors. “The state of emergency needs to be lifted as soon as possible,” she added.

Human Rights Watch's director for Turkey, Emma Sinclair-Webb, noted that maximum detention periods had only been reduced for regular suspects and not terror suspects, the bulk of detainees. “It looks like an improvement but it's another game of smoke and mirrors,” she told Al-Monitor.

Sinclair-Webb noted that the independence of the proposed review commission was also in doubt. Three of its seven members are to be appointed by the prime minister and one each by the justice and interior ministers. The remaining two will be drawn from the top courts, giving “the aura of being a judicial body,” she said, when in fact it isn’t really.

Not only that, how would the commission, given its size and two-year mandate, handle the 100,000-plus cases of individuals who have been sacked since the coup? She concluded that the process may well be “a way for creating an appearance of domestic remedy to stop people from taking their cases to the European Court of Human Rights.” Turkey is a signatory of the European Convention on Human Rights and accepts its rulings as binding in line with its efforts for full EU membership.

But within days of the failed coup, the Turkish government informed the European court that it might suspend its jurisdiction during the ongoing state of emergency. At least 100 Turkish citizens are believed to have taken their cases to the Strasbourg-based body since the coup.

Turkey has refrained so far from suspending the convention, but there are worrying signs that it may, warned human rights lawyer Erdal Dogan. “It that happens Turkey will be shielded from all international scrutiny and accountability, thrusting it into the league of countries like Syria and Turkmenistan,” Dogan told Al-Monitor.