In Eastern Ghouta, rebel infighting that erupted after the government forces lost control of the area has taken its toll on hospitals and medical facilities. 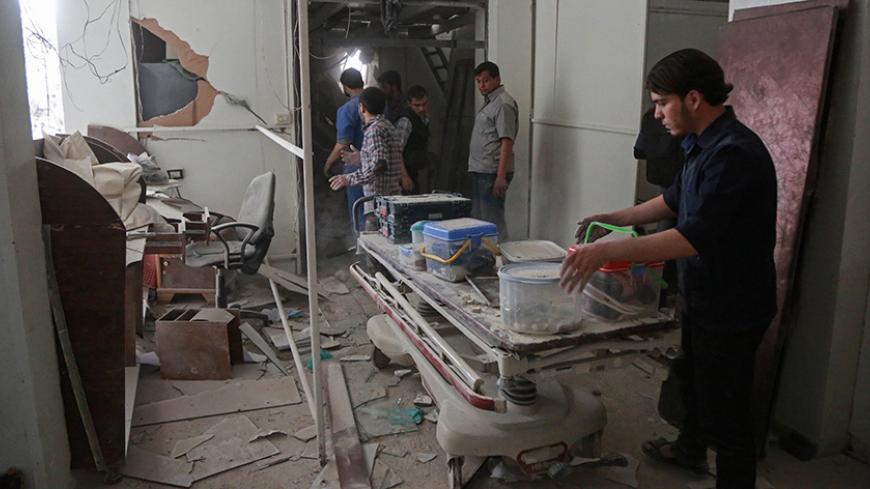 Last year, Hala al-Shami launched a medical initiative aimed at connecting amputee children from around Eastern Ghouta with local doctors. Children were bussed to a clinic and given access to much-needed physiotherapy, exercise space and even — when possible — prosthetic limbs, with parts smuggled from central Damascus through tunnels before being customized in underground workshops.

The children's stories were a testament to the incessant bombardment that Eastern Ghouta has experienced since falling from government control in 2013. But now there are added risks — from the ground as well as the sky.

"Before the infighting, I'd go to all the towns in Ghouta easily," said Shami, who preferred to use a pseudonym. "Medical services were working and available."

"Now with the start of the infighting, there's been a decline [in services] in some of these towns that have experienced heightened tensions … and doctors have been arrested at checkpoints," he told Al-Monitor on June 8.

In Eastern Ghouta, one of the armed rebellion's last footholds in Rif Dimashq, recent infighting between Islamist rebel groups has created yet more risks for hospitals, medical staff and patients. Medical staff have been arbitrarily detained, beaten and threatened. Medical infrastructure, including front-line hospitals, have been commandeered by armed groups.

Since April 28, rebel infighting has pitted Salafist faction Jaish al-Islam against former al-Qaeda affiliate Hayat Tahrir al-Sham (along with Faylaq al-Rahman). The groups control different sections of a long-contested rebel pocket that is located just a few kilometers east of the center of the Syrian capital.

On June 1, monitoring group Syrians for Truth and Justice warned that in the wake of interfactional clashes that began in April, "the frequency of arbitrary arrests and assaults … against a number of medical personnel" has escalated.

In mid-May, a group of doctors travelling between two areas of Ghouta that are controlled by opposing factions were detained and threatened with violence.

"All the doctors intended to return to Douma, which is controlled by the Army of Islam [Jaish al-Islam]. They got on an ambulance, and on the way back, a Faylaq al-Rahman-operated checkpoint … stopped the medical personnel and attacked them," the Syrians for Truth and Justice report stated.

One doctor was "severely beaten," the report added. Staff from a hospital near the same checkpoint who tried to intervene were told to leave, and Faylaq al-Rahman fighters on the checkpoint "fired in the air intensively," according to one eyewitness quoted in the report.

Jaish al-Islam has also been accused of intimidating and arresting medical staff, as well as confiscating supplies.

Since the first day of infighting — April 28 — Al-Salam Hospital in Ghouta has also been struggling to operate after armed gunmen believed to be from Jaish al-Islam raided the hospital's main supplies warehouse and took off with some 90% of its contents. Clashes in an area then under Hayat Tahrir al-Sham's control reached around the area of the warehouse, but armed men then entered and confiscated the items, including emergency room equipment and drugs, according to a hospital manager speaking to Al-Monitor on June 8.

Jaish al-Islam originally "denied they had seized the warehouse, and claimed that other factions were the ones responsible — but then admitted to taking a small amount of its contents," said the manager, who declined to give his name.

Jaish al-Islam representatives were unavailable for comment. However, the group's spokesman, Hamzeh Birqdar, was quoted on June 1 as saying that Jaish al-Islam would "return [the supplies] to the people of East Ghouta as soon as possible," according to Syria Direct.

Hospital staff say they are still waiting more than a month on. "Until now, nothing has been returned," Al-Salam's manager said. "The hospital is open and functional, but the quality of surgical supplies is very poor as a result of the confiscation of the warehouse."

"There are less injuries coming from [government] airstrikes … but there has been no time to rest because doctors are receiving injuries from the fighting [instead]," said Katoub. He added that tensions at checkpoints and infighting have made it "hard to bring injuries to perform surgeries" while "movement from town to town is not easy because of the fighting and because of the checkpoints on the road."

All the while, the Syrian government is threatening civilians as well as the long-term prospects of rebel groups in Ghouta.

Since April last year, the last time Ghouta rebels turned on one another, the Syrian army and its allies have retaken about half of the remaining rebel-held areas. An ill-fated rebel offensive that at one point reached the outskirts of Damascus was pushed back in March, and, as a result, pro-government forces moved in and retook Qaboun and Barzeh. That allowed them to confiscate smuggling tunnels between there and Ghouta, while longstanding trading crossings between government and rebel-held areas have been either closed or more tightly regulated.

Bashar al-Assad "has killed the Ghouta uprising, he just hasn't been able to bury it. It's a zombie insurgency," argued Aron Lund, a fellow at the Century Foundation who has focused on dynamics inside Ghouta. Speaking to Al-Monitor on June 8, Lund added, "[Rebels are] surrounded and outgunned, and the regime controls their supply of food and other goods."

"Even if they were united and helped each other tackle these pressures, they would be in a virtually impossible situation. And they're not united."