Secretary of State Rex Tillerson has been huddling with Gulf diplomats all week, to no avail. 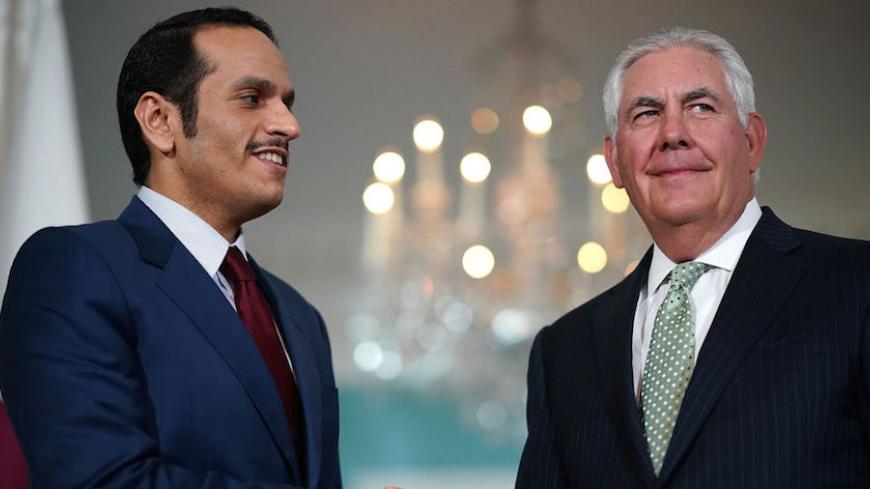 WASHINGTON — Qatar’s top diplomat told an audience here today that his country is willing to have a dialogue with Arab Gulf states that have been blockading the tiny country for more than three weeks. But he rejected their ultimatum that Doha agree to a list of non-negotiable demands, from closing Al Jazeera news channel and a Turkish military base to downgrading diplomatic relations with Iran.

“We are willing to negotiate with our neighbors, but we won’t compromise our sovereignty,” Qatari Foreign Minister Mohammed bin Abdulrahman Al Thani told journalists and experts at an event hosted by the Arab Center Washington DC.

The blunt remarks confirmed the prevalent mood that the parties remain as far apart as ever despite days of talks in the US capital.

Secretary of State Rex Tillerson cleared much of his schedule this week to huddle with Al Thani and Kuwaiti officials trying to mediate the dispute. But the State Department acknowledged today it was unsure when the crisis might get resolved.

“Everyone gets it,” State Department spokeswoman Heather Nauert said at her press briefing today. “This needs to be resolved. When it will be resolved, we are not certain of it at this time.”

“We hope the parties get together and recognize that there is going to be a negotiation,” Nauert said. “We are standing by and ready to help.”

Saudi Foreign Minister Adel al-Jubeir earlier this week told journalists at a press briefing that the demands from Saudi Arabia and the United Arab Emirates are non-negotiable.

“It's very simple. We made our point. We took our steps. And it's up to [Qatar] to amend [its] behavior,” Jubeir told journalists June 27. “And once they do, then things will be worked out. But if they don't, they will remain isolated. If Qatar wants to come back into the GCC [Gulf Cooperation Council] pool, they know what they have to do."

Without naming Saudi Arabia, Al Thani criticized the remarks. The Qatari envoy said such ultimatums were hard to stomach.

“I emphasized [to Tillerson] that suggestions by one party that their demands are non-negotiable are not helpful,” Al Thani noted.

“If there is a clear tangible request, we have the right to respond through dialogue,” Al Thani said. “I don’t see any other solution [than] to sit down at the table and discuss what kind of grievance each country has.”

A Saudi analyst expressed concern about the hyped-up anti-Qatar rhetoric he was seeing on Saudi social media and intolerance for any mildly dissenting viewpoints. He said he feared that, in such an atmosphere, Saudi Arabia and the United Arab Emirates might be tempted to overreach in their demands.

“[Saudi] social media is campaigning for Qatar Sheikh Tamim [bin Hamad Al Thani] to surrender and kiss the hand … and ask for forgiveness,” said the Saudi analyst, speaking not for attribution to discuss politically sensitive topics at home. “The only thing left is for Saudi Arabia to risk an operation to remove Sheikh Tamim, and I don’t think we can do that.”

“We lose our cool,” the analyst said. “Countering views are scarce now in Saudi Arabia.”