Palestinians accuse the US negotiating team that met with President Mahmoud Abbas June 22 of taking Israel's side, by not discussing the two-state solution or Israeli settlement activities. 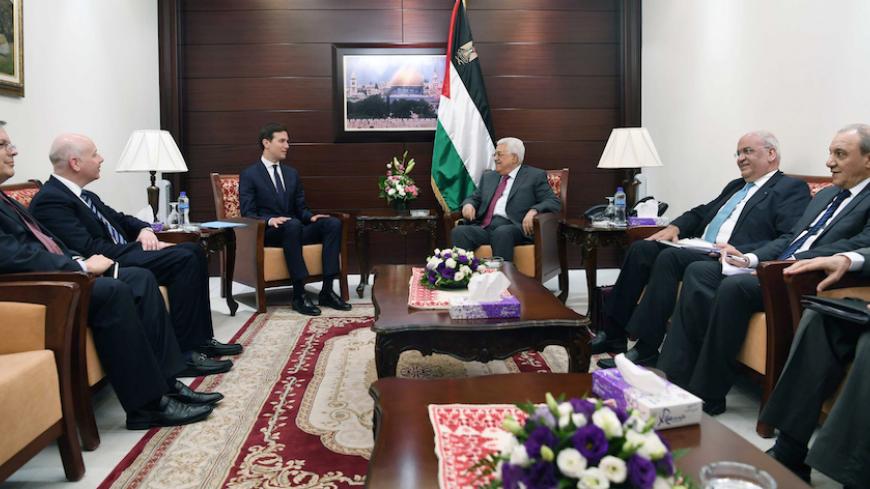 The press release issued by the US Consulate in Jerusalem on June 22 sounded a lot like the typical protocol press releases issued by Arab state wire services. It mentioned who met and talked about peace, called the meeting “productive,” but failed to make any statement about what happened in the highly anticipated US-Palestinian meeting held in Ramallah late June 22.

The fact that the statement failed to mention settlements or the two-state solution indicates that the meeting was not very positive. Israeli press reports claim that the issues of support to Palestinian prisoners and incitement — the usual Israeli talking points — were major points of contention. For Palestinians, the issue of caring for prisoners is a legal mandate as stated in the 1996 Palestinian Basic Law. Article 27 of the Basic Law stipulates that the Palestinian government guarantees educational and social welfare support to families of prisoners and martyrs. Politically, with over 6,000 Palestinian prisoners and tens of thousands who were killed since the Israeli occupation in 1967, stopping such social stipends would be nothing short of political suicide.

The refusal of the American team to utter the simple words two-state solution or to publicly condemn the settlement activities is seen as a green light to the Netanyahu administration to continue its pro-settlement enterprise. Leading Palestinian daily Al-Quds focused June 23 on the increase in settlement activities as the real proof of who doesn’t want peace. “Talking about peace efforts and having meetings while Israel does what it pleases means that we are translating this effort for peace into the realm of absurdity. This will deepen the mistrust in the seriousness of trying to find a just, lasting and comprehensive peace in the region,” read the editorial titled “What peace efforts amid all these settlements?”

Jared Kushner, the son-in-law and special adviser of President Donald Trump, certainly got his feet wet on this visit and began to realize how difficult and complicated many of the issues are. Palestinian sources in Ramallah were quoted in the Israeli press as saying that they felt the American delegation acted like the lawyers for Israel’s Prime Minister Benjamin Netanyahu rather than the neutral facilitators who are trying to make the so-called ultimate deal.

Palestinians have also pointed to the Twitter feed of US special peace envoy Jason Greenblatt as a sign of the pro-Israel bias of the American negotiating team. Greenblatt has tweeted about visiting the Western Wall, as well as visiting with the families of Israeli soldiers, public figures and intellectuals. In one tweet, Greenblatt described the killing of a member of the Israeli security services by Palestinians as "a brutal act of terrorism.” This description is contrary to the official US definition of terrorism that is limited to attacks on noncombatants. With the exception of Greenblatt's iftar with the Palestinian patients at the Maqassed Hospital in East Jerusalem, and its meeting President Mahmoud Abbas, the US team had no other meeting with the Palestinians. Between June 19 and June 22, Greenblatt posted 10 tweets detailing meetings with Israeli officials, writers and families versus one tweet of his meeting with Abbas and two of his visit to Maqassed Hospital.

Palestinian officials expressed a very pessimistic attitude about the future of the negotiations, saying that most of the meetings between the Americans and Palestinians were focused on small issues that were fed to the Americans by the many Israelis they met.

The maneuverability of Abbas is becoming more and more limited with the situation in the Gaza Strip heating up again as the electricity crisis looms and possibilities of an alliance between Hamas and renegade Fatah leader Mohammed Dahlan are on the rise with a surprise visit expected soon by Dahlan aide Samir Mashrawi.

Palestinian officials contacted by Al-Monitor said they felt abandoned by the United States as their negotiating team left little leeway for Abbas to be able to show something for his efforts and attempts to keep the lid on the brewing public discontent with him. The biggest problem for the Palestinian president comes from families of prisoners and martyrs, as these families are worried that they will be sacrificed for an unknown process that has little chance to succeed.

On June 23, Israeli press reports said that despite the talk about prisoners and incitement, some larger issues were discussed and the beginnings of a process seem to be taking shape. According to Palestinian sources, a meeting scheduled in Washington next month will make the picture much clearer. As for now, the Palestinians are holding on tight to their cards and are unwilling to make any compromises without being able to extract the utterance from the US mediators of the words "two-state solution" and a condemnation of illegal Israeli settlement activities. As a Palestinian source in Ramallah who asked to remain anonymous told Al-Monitor, “If they can’t support the two-state solution and condemn settlements, there is nothing to talk about.”