The regional players are buzzing after the Kurdistan Regional Government announced it will hold a referendum on independence, and signs point to tacit support from the United States and Turkey. 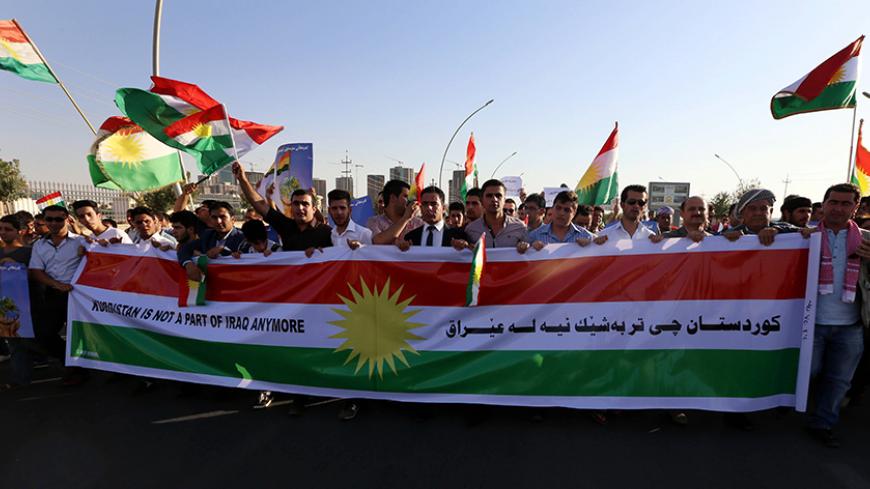 Last week’s historic decision by the Kurdistan Regional Government to hold a long heralded referendum on Kurdish independence from Iraq has elicited a flurry of international reactions. The vote, to be held Sept. 25, will cover disputed territories claimed by the Kurds and Baghdad alike, most notably the oil-rich province of Kirkuk.

It's always been a given that the blessings of one regional neighbor — Turkey, Iran or potential future neighbor Iraq — and that of the United States are necessary for an independent Kurdistan to be politically and economically viable. Deciphering these country’s respective responses may help shed light on where the Iraqi Kurds' bid to redraw borders stands. But reading between the lines is not always easy because often Baghdad will look to Tehran, as Washington will to Baghdad, and Ankara to all three and vice versa, as they calibrate their own positions.

As ever, the US reaction was mixed. The State Department repeated the standard line that the United States supports “a unified, stable, democratic and a federal Iraq." But it also said that it recognized the “legitimate aspirations” of the Kurdish people. Its main quibble seemed to be over the timing of the referendum, which might “distract” from the fight against the Islamic State. Iraqi Prime Minister Haider al-Abadi could decide, for instance, to withhold future US funds used to pay Kurdish fighters’ salaries. The other big worry is how this will affect Washington’s efforts to shore up Abadi internally ahead of critical parliamentary elections in 2018.

In private conversations, a growing number of administration officials concede that Kurdish independence from Iraq is inevitable and there is little they can do to delay the referendum. All signs suggest that Washington will likely do nothing to actively oppose Iraqi Kurdish independence, nor will it overtly encourage it, and hope that the sides will sort things out among themselves.

Unsurprisingly, the central government in Baghdad sounded far more unhappy with the KRG’s announcement. Abadi also appeared to take issue with the timing rather than with the referendum itself, a possible indication that he hopes to sustain Kurdish support for his own political calculations. Abadi said in April, “The desire of our Kurdish brothers to create a country of their own is theirs. … But holding a referendum at this time is not right as the IS war still rages, the region’s situation is not suitable and some neighboring countries believes this move poses a threat to the nation’ security themselves.”

Abadi was referring to Iran and Turkey, which have their own large and restive Kurdish minorities. Iran’s reaction, however, was unusually muted and gave little away. The Iranian Foreign Ministry said in a statement, “The Kurdistan Region is part of the Iraqi republic and unilateral decisions outside the national and legal framework, especially the Iraqi constitution … can only lead to new problems.”

Iraqi Kurdish leaders often privately claim that they can survive without Iran’s support, provided they have that of the United States and Turkey. And the United States is even more unlikely to oppose Kurdish independence if its NATO ally Turkey doesn’t.

It is undisputed that as things stand, Turkey holds the key, or rather the spigot, to Iraqi Kurdistan’s economic survival. In May 2014, the KRG began exporting oil, its main source of revenue, independently via a newly built pipeline to Turkey. That Ankara agreed to allow the Iraqi Kurds to use Turkish export terminals to sell their oil was seen as the surest sign yet of Turkey’s tacit acceptance if not outright encouragement of eventual Kurdish statehood. At the same time, several thousand Turkish troops deployed in Kurdish-controlled areas of Iraq are viewed, at least for the moment, as insurance against Iran-backed Shiite militias and the Kurdistan Workers Party, a rival armed Kurdish group that is seeking to deepen its influence in northern Iraq.

Many may be left wondering why Turkey’s reaction to the referendum announcement was so harsh. Turkish Prime Minister Binali Yildirim called it “irresponsible” and the Foreign Ministry said it was a “grave mistake.” Today, government spokesman Numan Kurtulmus declared that Turkey is “in favor of Iraq’s territorial integrity.”

Aydin Selcen, Turkey’s first ever consul general to Erbil, whose appointment in 2010 formalized the dramatic turnaround in Turkey’s ties with the Iraqi Kurds, told Al-Monitor, “In Turkey’s prevailing system, the sole [reaction] worthy of attention is what the president does, not even what he says.” So far, Recep Tayyip Erdogan has not uttered a peep.

Bilal Wahab, a Soref fellow at the Washington Institute for Near East Policy, agrees. He told Al-Monitor, “I don’t think President [Massoud] Barzani would have moved ahead with setting a date for the referendum if a Turkish red light was in place.” He went on, “That may not mean a green light, either. Turkish rhetoric — calling the referendum a ‘grave mistake’ — is to be expected given Turkish internal politics.”

Turkey will hold three elections in 2019 — municipals in March and presidential and parliamentary ones in November. Thus, Erdogan needs to strike a careful balance between his nationalist and Kurdish conservative base. But his silence strongly suggests that, as both Selcen and Wahab say, Turkey’s single most powerful figure is on board. And that may be assurance enough for Barzani. As Selcen noted, after all, “Holding a referendum and declaring independence are not the same things.” In the meantime, there is plenty of mischief that can be done by those who oppose an independent Kurdistan and above all by the perpetually squabbling Kurds themselves.