To destroy Hamas rule, Palestinian President Mahmoud Abbas pushes it into a confrontation with Israel. 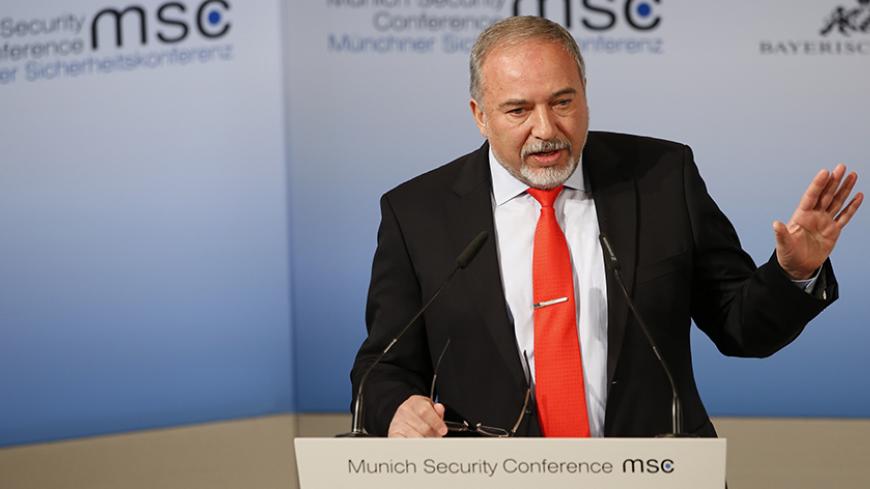 At the Herzliya Conference, Defense Minister Avigdor Liberman said June 22 that Palestinian President Mahmoud Abbas wants to drag Hamas into a military conflict with Israel. According to Liberman, Abbas believes that another military conflict between Hamas and Israel could lead to the downfall of Hamas and the return of the Palestinian Authority (PA) to the Gaza Strip.

Liberman is known for his acrimonious feelings toward the Palestinian president and has called him an obstacle to peace on countless occasions. In Liberman's view, only a route "circumventing Abbas" will lead to progress on the diplomatic front. This time, however, his comments were apparently not made out of the same sense of animosity. They were based on assessments by top Israeli security officials who claim that the PA's financial disengagement from Gaza — the electricity crisis, the slashing of salaries and even the reduction of the supply of medicines and medical equipment to Gaza's hospitals — could drag Hamas into another military conflict with Israel.

According to some assessments, these moves were planned by Abbas with a clear purpose. They were not simply intended to advance greater financial efficiency in the PA or to appeal to the Trump administration, but to bring down the Hamas regime in Gaza too.

The belief that a serious economic crisis will bring down the Hamas regime was the basis of Israel's policy, but also of the PA's policy after the June 2007 Hamas coup in the Gaza Strip. At one time, one of the main advocates of this approach of "hanging Hamas out to dry" was none other than Mohammed Dahlan, Abbas' adviser on security matters at the time and now his bitter rival.

It seems as if it took Abbas almost a decade to realize that the situation in the Gaza Strip is irreversible. Still, according to an assessment by the Israeli defense network, the Palestinian president has not given up hope of retrieving Gaza. He still sees himself as the "President of [all of] Palestine." And yet, after all the attempts to bring about reconciliation and compromise with Hamas, he is left with no choice but to change his approach and strive for the toppling of the Hamas regime by force.

One Israeli security source told Al-Monitor that for a long time now, Abbas and other senior officials in the PA have been especially critical of Hamas, particularly during contacts with international groups, including the Americans. Originally, they argued incessantly that Hamas is a hostile organization, but the tone became even more aggressive, approaching the militant, once it was learned that Dahlan's relationship with Hamas has been getting closer.

Senior PA officials have even begun using the term "Dahamasistan" recently to describe the reality in Gaza. The term combines the names "Hamas," "Dahlan" and "Afghanistan."

The campaign that Abbas is waging against Dahlan and Hamas is not limited to his talks with Western diplomats either. Al-Monitor has learned that representatives of the PA have been using interviews to the Palestinian media to emphasize that the international community regards Hamas now — more than ever — as a terrorist organization, responsible for the crisis faced by the people of the Gaza Strip.

So, for instance, Palestinian spokespersons emphasized comments by US Ambassador to the United Nations Nikki Haley on June 20. The envoy called upon the UN to declare Hamas a terrorist organization and the sole bearer of responsibility for the humanitarian crisis faced by Gazans. This approach was intended to prove to the residents of Gaza that they had no more reason to hope that Hamas can save them from their miseries, and that the time has come for a "struggle" against the rebellious organization from Gaza and "Satan's emissary," Mohammed Dahlan.

Back to Liberman's comments. In the past, reports in Israel stated that the defense minister actually met with Dahlan, whom he considers a potential partner for progress on the diplomatic front between Israel and the Palestinians. While neither side confirmed these reports, Liberman's positive attitude toward Dahlan is no secret.

Liberman’s claim that Abbas is pushing Hamas toward a military conflict with Israel is echoed by Jamaat Dahlan, Dahlan’s associates in the territories. They claim that Abbas has "lost his mind," as they describe it, over the relationship formed between Hamas Gaza chief Yahya Sinwar and Dahlan, through Egyptian mediators no less. "He [Abbas] never imagined such a thing — that he would disengage himself from Gaza and that Dahlan would fill the vacuum, seeming like a savior to the people of Gaza and the West Bank," one of Dahlan's supporters told Al-Monitor on condition of anonymity.

The supporters believe that the only way Abbas can sever the warm relationship that has formed between his two bitterest rivals is to cause a military conflict between Israel and the Gaza Strip.

Liberman's remarks at the Herzliya Conference and the remarks by Dahlan's supporters seem to match. The really interesting question is, of course, whether they were coordinated.

In a conversation with Al-Monitor, one senior Fatah source completely rejected these accusations. He said on condition of anonymity, "Liberman is well-known for his hatred toward Abbas. He should check his own house first to see how Israel spent years helping Hamas grow and transformed it into a major military organization that now poses a threat to Israel."

The source added that Abbas now realizes that "the reality that has emerged in the Palestinian territories [the West Bank and the Gaza Strip] cannot be changed through reconciliation. There are psychological processes that will be difficult to revert. The people of Gaza have begun to feel as if the PA and the people of the West Bank have abandoned them, and that feeling cannot be changed as long as Hamas continues to rule Gaza and wage war against Abbas."

Abbas should realize that many people in the Gaza Strip no longer see him as their president. Given the current crisis, many of them are actually pointing an accusatory finger at him instead.